As is customery at this time of year I have decided to sit down and try to review my first year back in tabletop wargaming...... and what a first year! 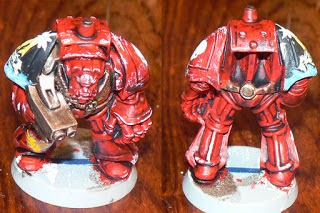 Yesterday I was given the greatest Christmas present of all by the misses. "I'm taking the kids out all day so the house is yours! I'll be back at 4pm!"

It was really hard not to dance a little jig as they walked out the door.

First thing I did was run up stairs and grab these blokes for undercoating.....

Christmas, it's for the kids really! 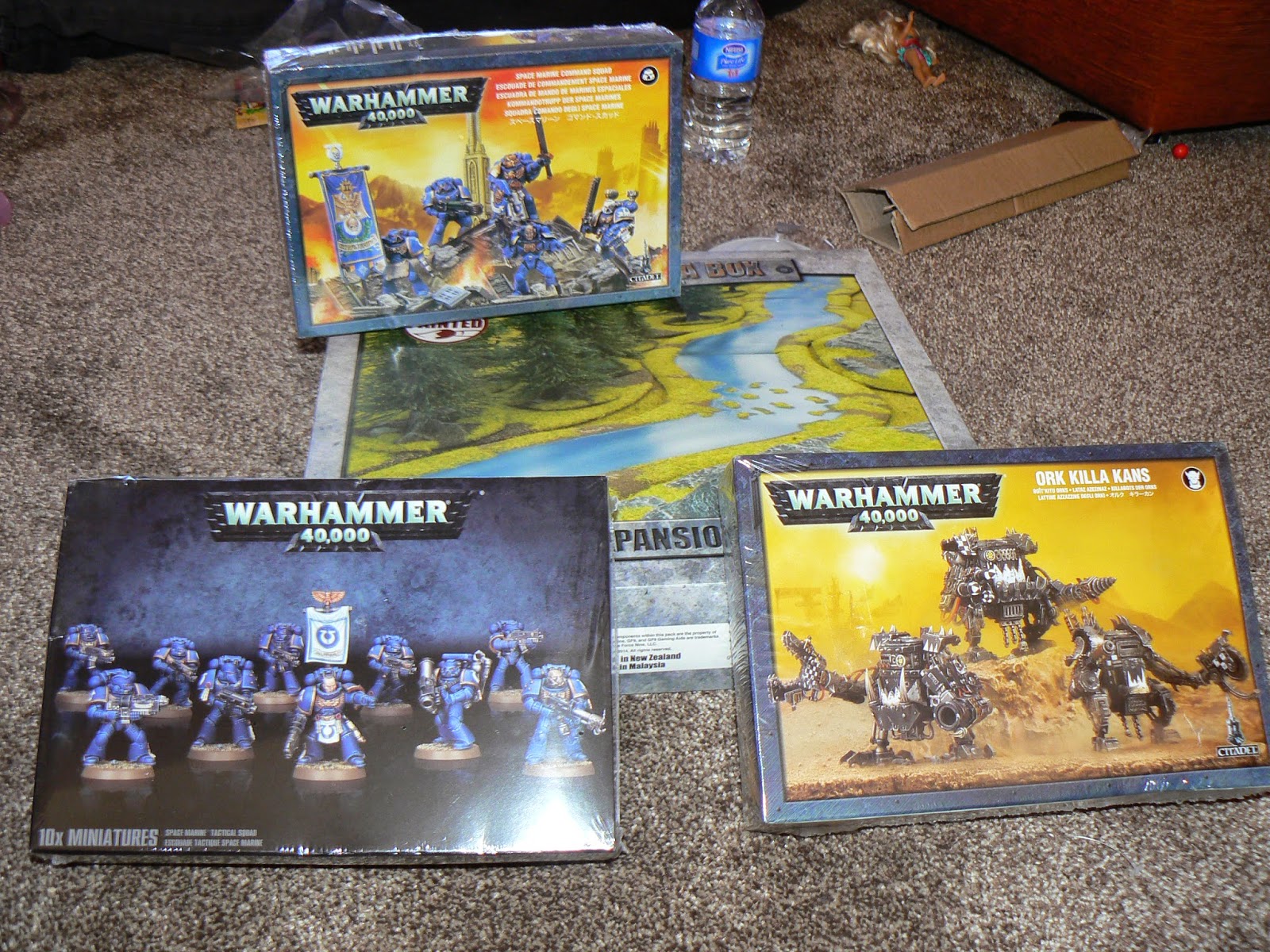 A painted Bloodbowl game 26 years in the making!

So 26 years after buying Blood bowl my Brother and I finally got round to playing a game with two fully painted teams!

Unfortunately it looks like the camera lens got condensation or turkey fat, or double cream etc on it as most of the photos are out of focus or whited out or just plain crap

Thankfully there were two decent photos to record the event!


The game ended one all and it seems my brothers fiance is a much better player then he is!

Hopefully we will get another game in before going back to work as he is starting to construct his own stadium and it is a sterling effort for his first attempt!

Peace on Earth and good will to all men.... unless your a bloody Anglo Dane!!!

With the lull between Black Friday and Manic Monday and "Oh fuck it's Tuesday (!)" Al and I managed to sneak in a game of SAGA. 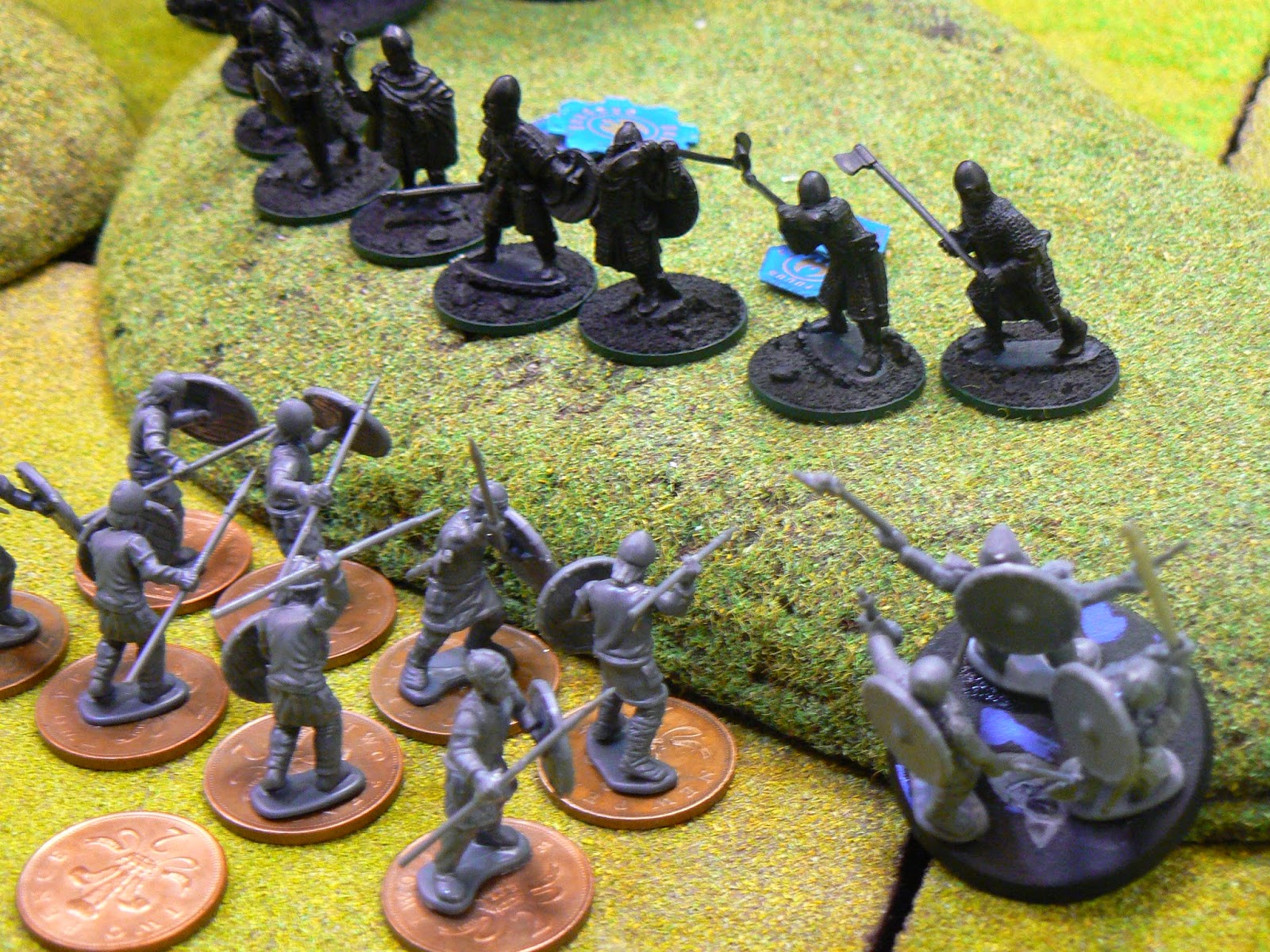 I decided Al's present (as well as some Anglo Dane Saga Die), should be a sound whooping at the hands of my maurading Vikings!

Seasons greetings to one and all.

I'm walking down the stairs with some minis to prime for the festive painting seasons when the misses pipes up with..

"Ok I can prime the minis during the Tea breaks no worries"....

And then the construction begins......

Hour and thirty minutes later I end up with this 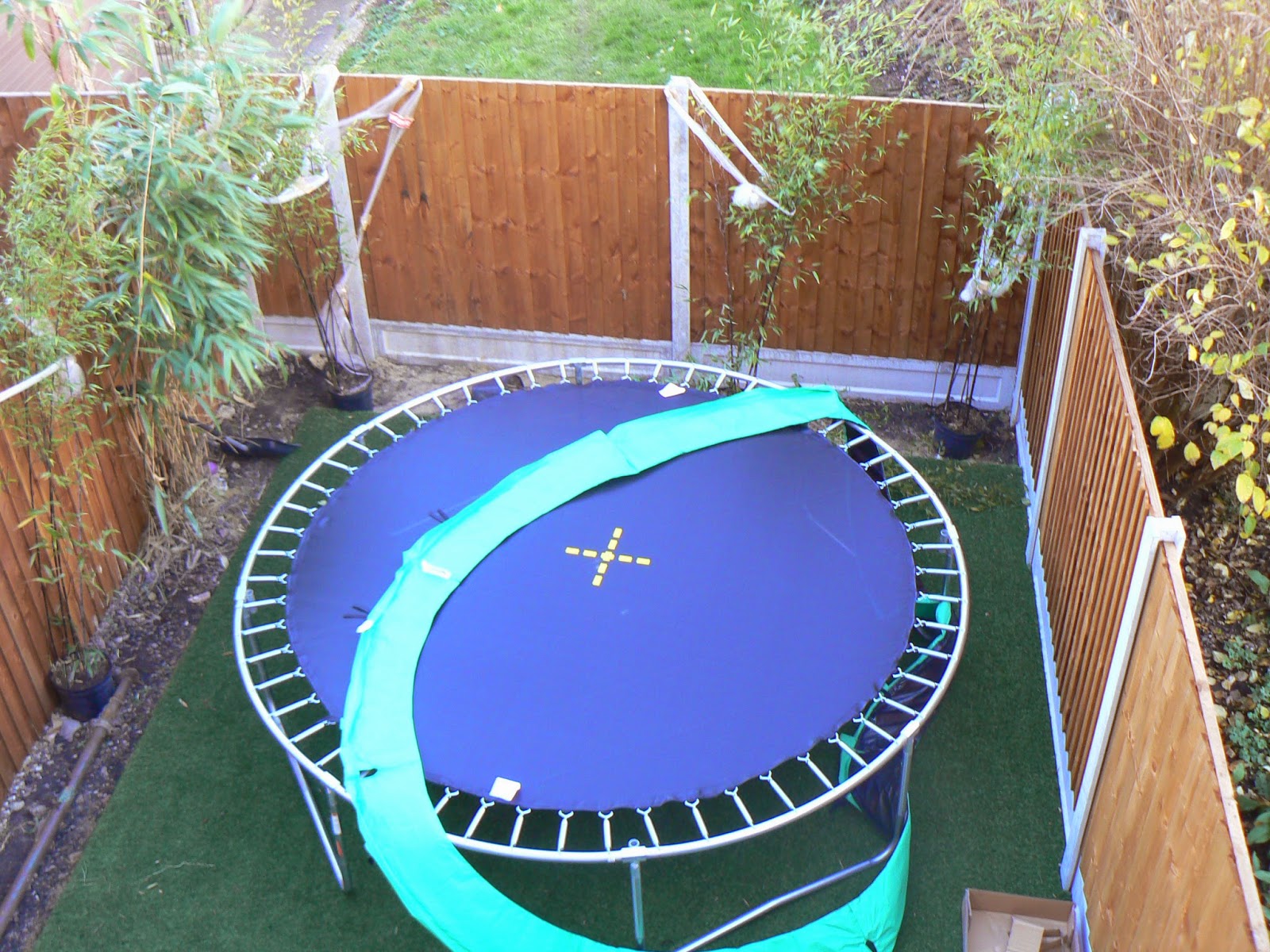 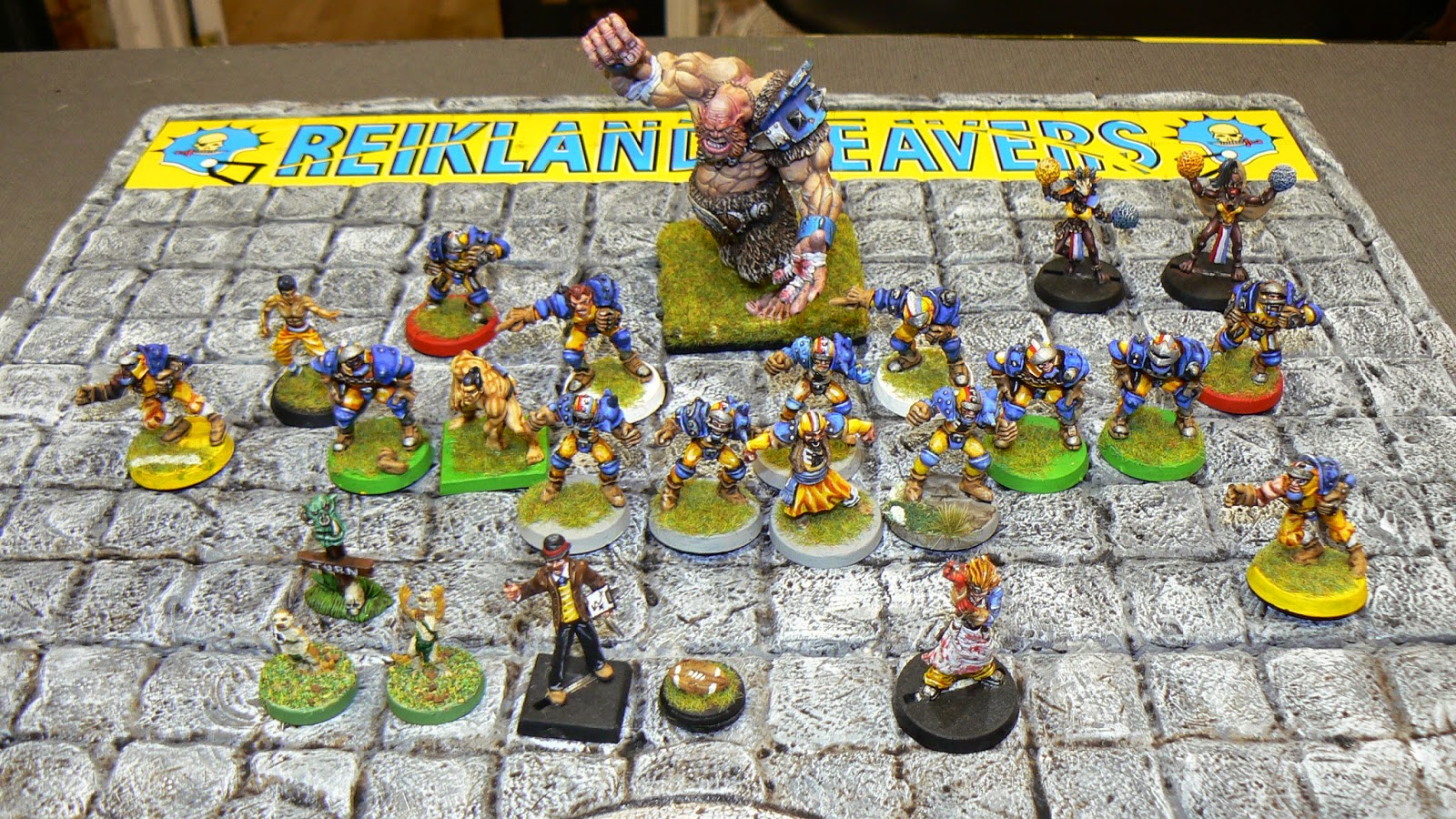 Once again Al and I managed to meet up for a game of little soldiers. With us both being destroyed for work the next day after our last game of Warmachine we decided we needed a change.

Al had been on Ebay and snapped up various armies of Gripping beast Saga miniatures so 4 points of Saga it is!


So as many WHF generals have had to do, I have played through most of the different spell decks with regards to my WHF wizards.

And finally I think I have found the motherload “Lore of Muther F*@king Shadows!” the one Jiri and Lano love to hate! 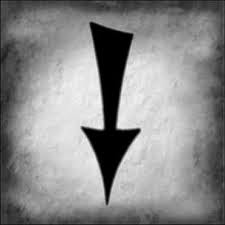 This Friday I played Jiri and his Skaven at 1000 points.

Unfortunately I forgot my camera but I can summerise Jiri's misery as; 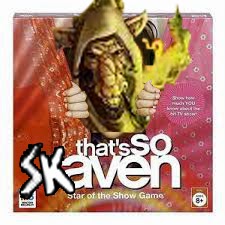 d) Get Gutter runners gunned down by Outriders, runaway.

f) Jiri chases down and shreds one of my wizards with 2 useless spells (awaking of the woods and there is no bloody trees on the field!).

It ended as a very black Friday for Jiri and the poor fella suffered the worse rolling I have EVER witnessed.

Although it was very entertaining for the other fellas present to witness the self destruction and utter failure of Jiri's Skaven to do anything useful I had to feel for the fella!

Warmachine and the witching hour 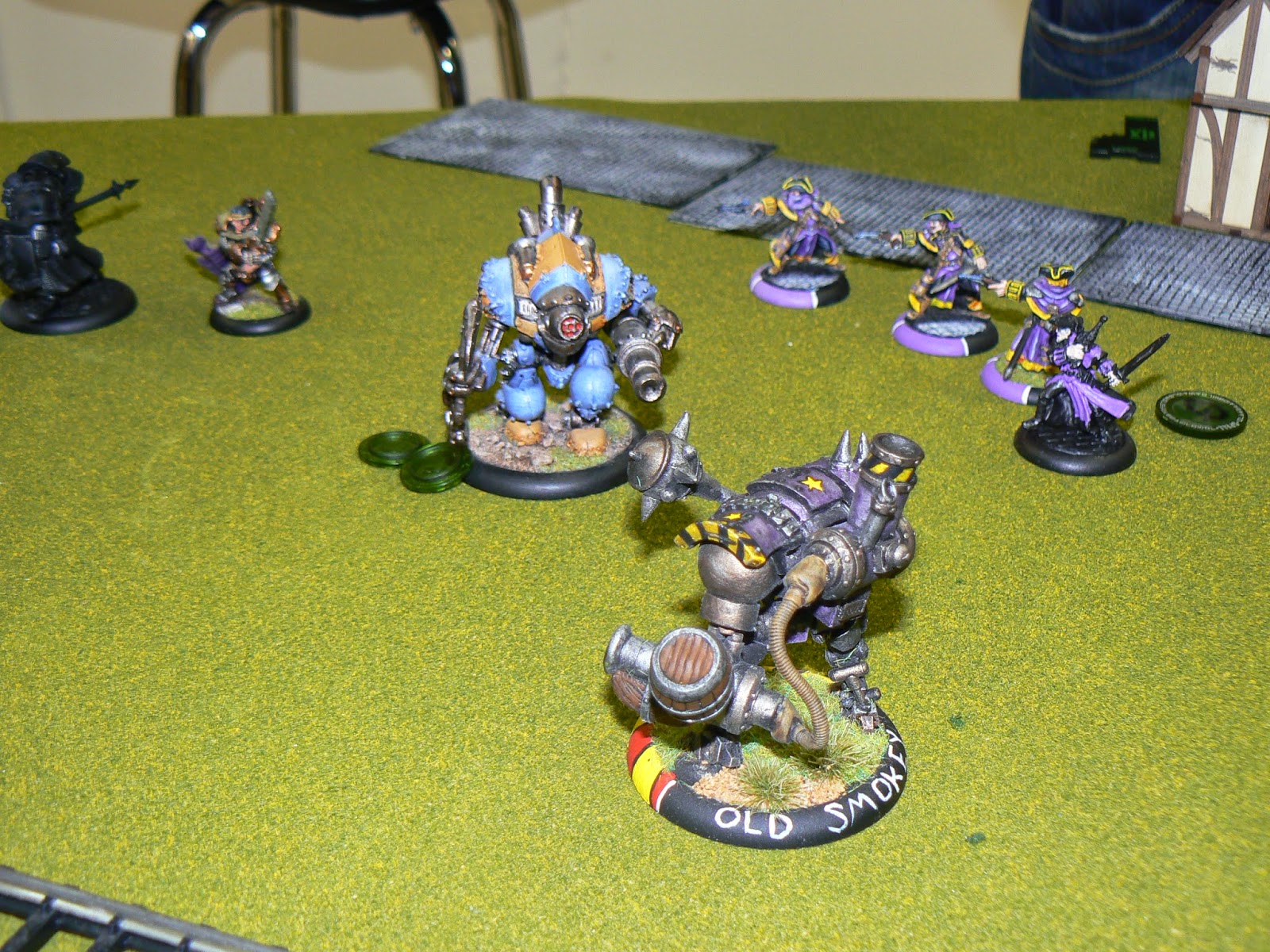 It's been a crap week and I am just desperate to paint something to get into a Zen state.

I don't have much spare time and

1) I don't want to batch paint
2) I don't have access to any Reaper Bones so I'm stuck for options.

That is until I spot these on the window ledge (I keep hoping they will get the message and jump).

He bought them just on the basis of the web site pictures and the abominations which turned up leave a lot to be desired.


Willy hang your head in shame!

The good news is it does not matter what kind of half arsed, speed paint job I do on these it can only make them look better. 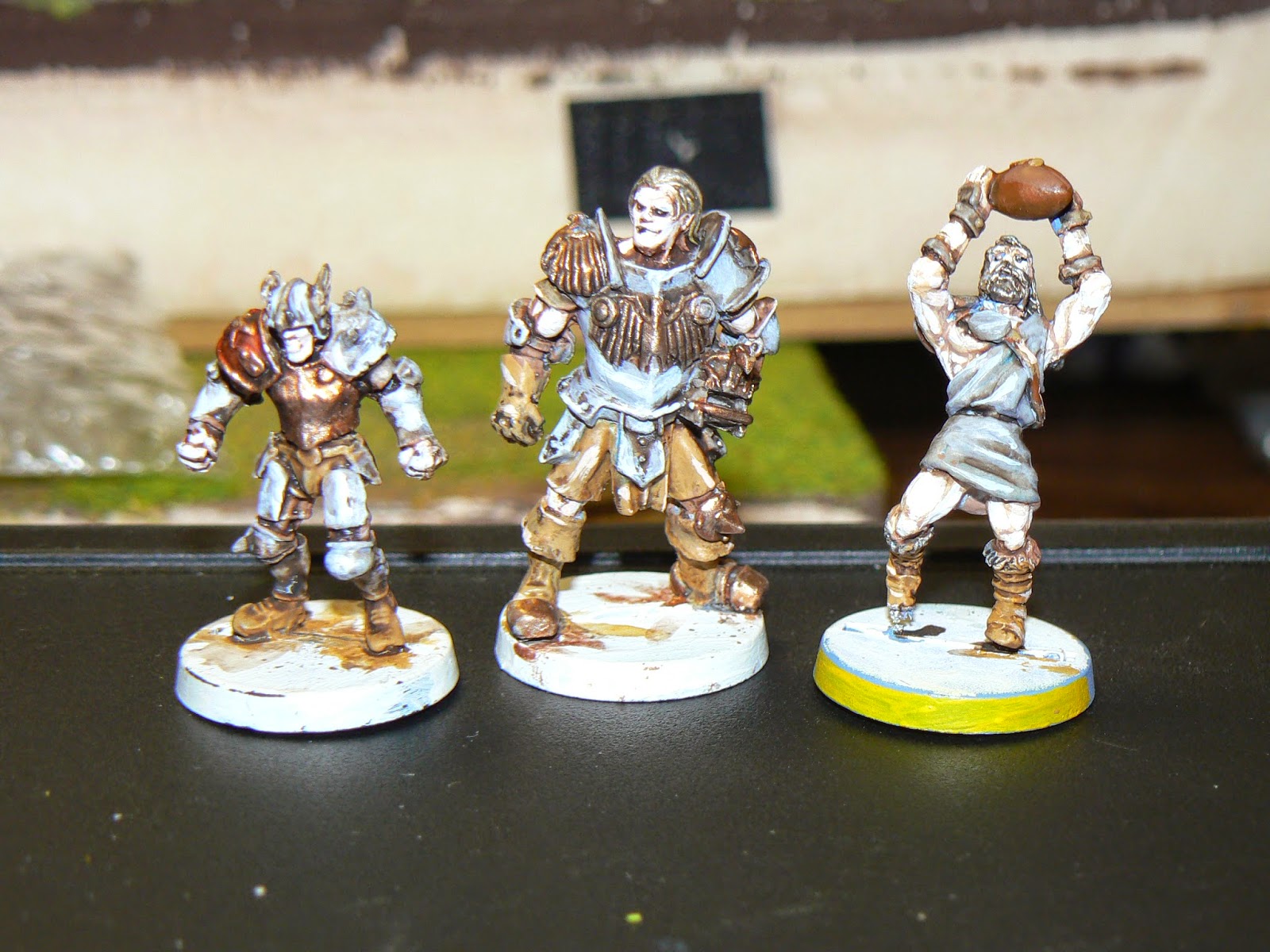 I decided to make the middle fella look like the Joker from Batman and it seemed to work well.

The thing on the left reminded me of the awful Prince August abominations of my childhood.

At least I felt I had blown out the painting cob webs.

Say what you want about GW but these pieces for crap would never have been released if GW still held the reins of Blood Bowl. 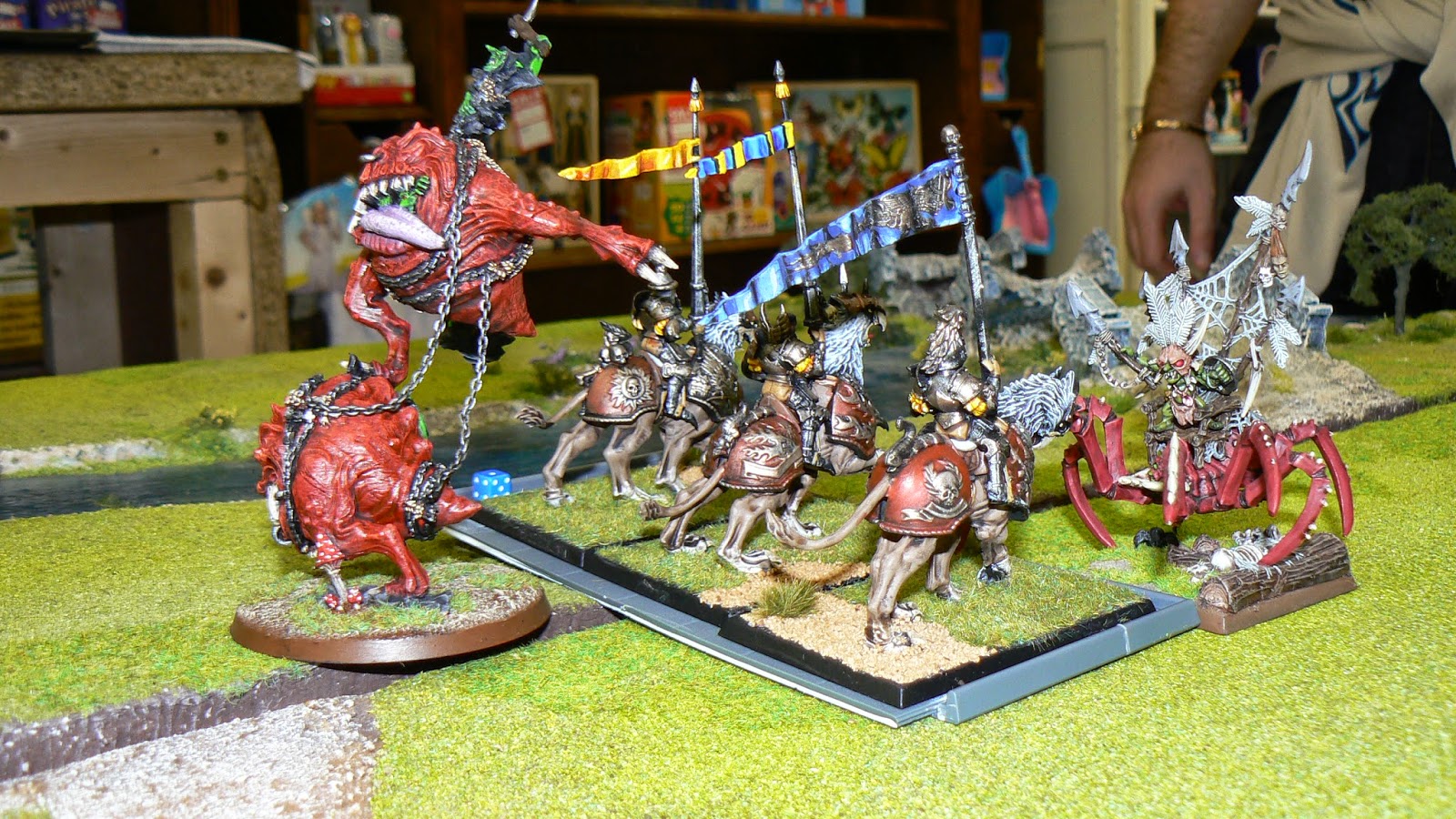 Al and I are really on a roll and once again the shiny, shiny box was opened, 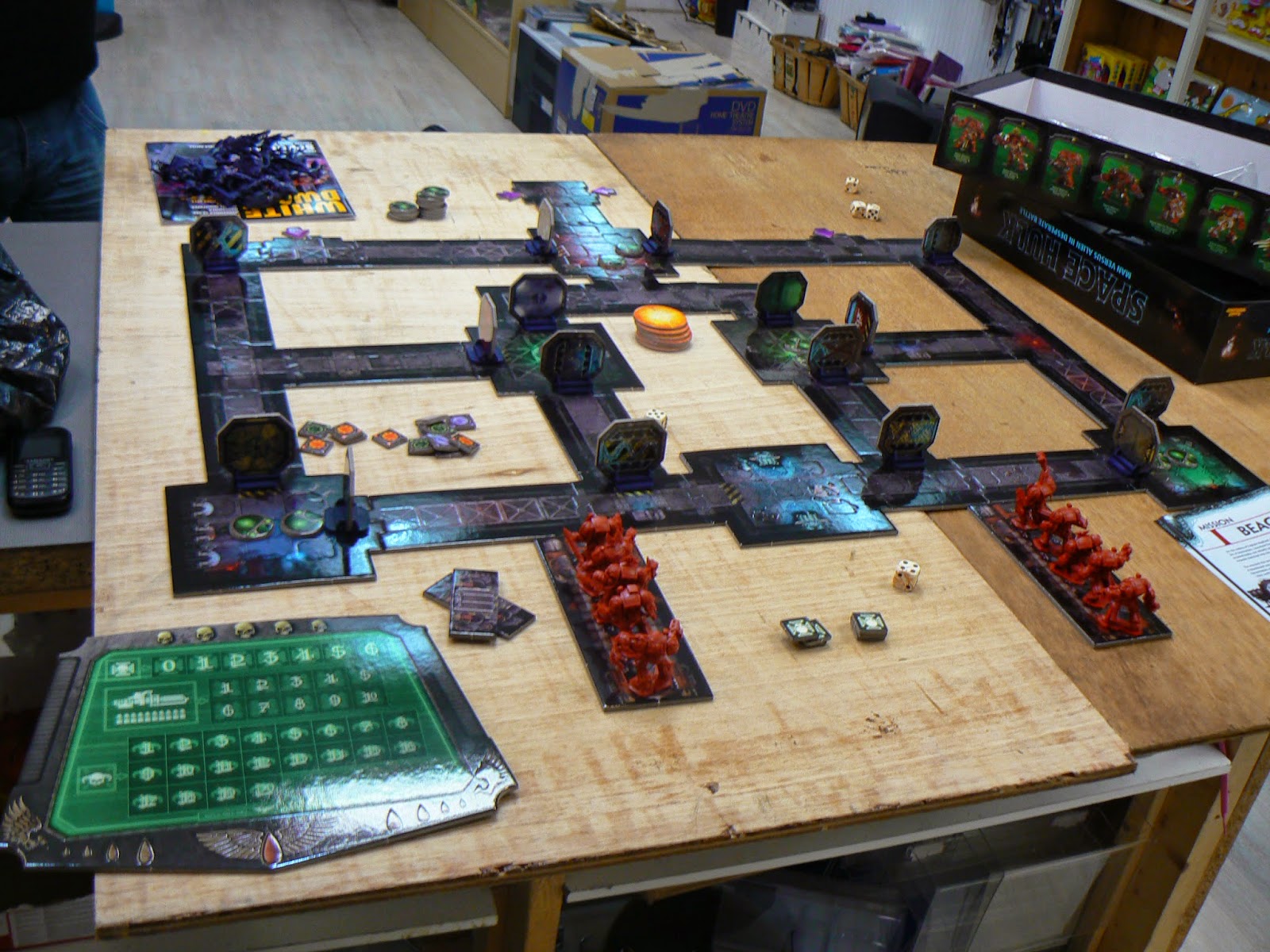 Having played the prequel published it White Dwarf and "suicide mission" (it was quick to set up) it made sense to start at mission one rather then dip in and out of the missions.

Fear the puppet princess of rebuke!

I suppose playing in a toy shop it had to happen.

With all the bulk painting going on at the moment I do love painting days like this, 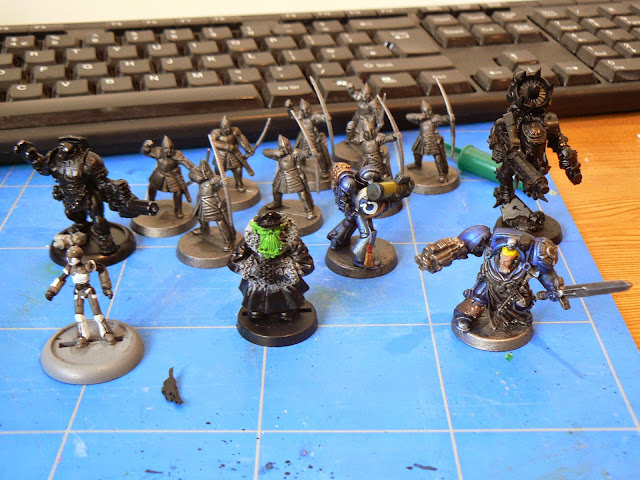 a wide variety of mini's on the table and lots of open pots of paint.

So I set myself the Half term challenge of painting 20 Space Marines in 7 days.......

Knocked out 17 in two hours! 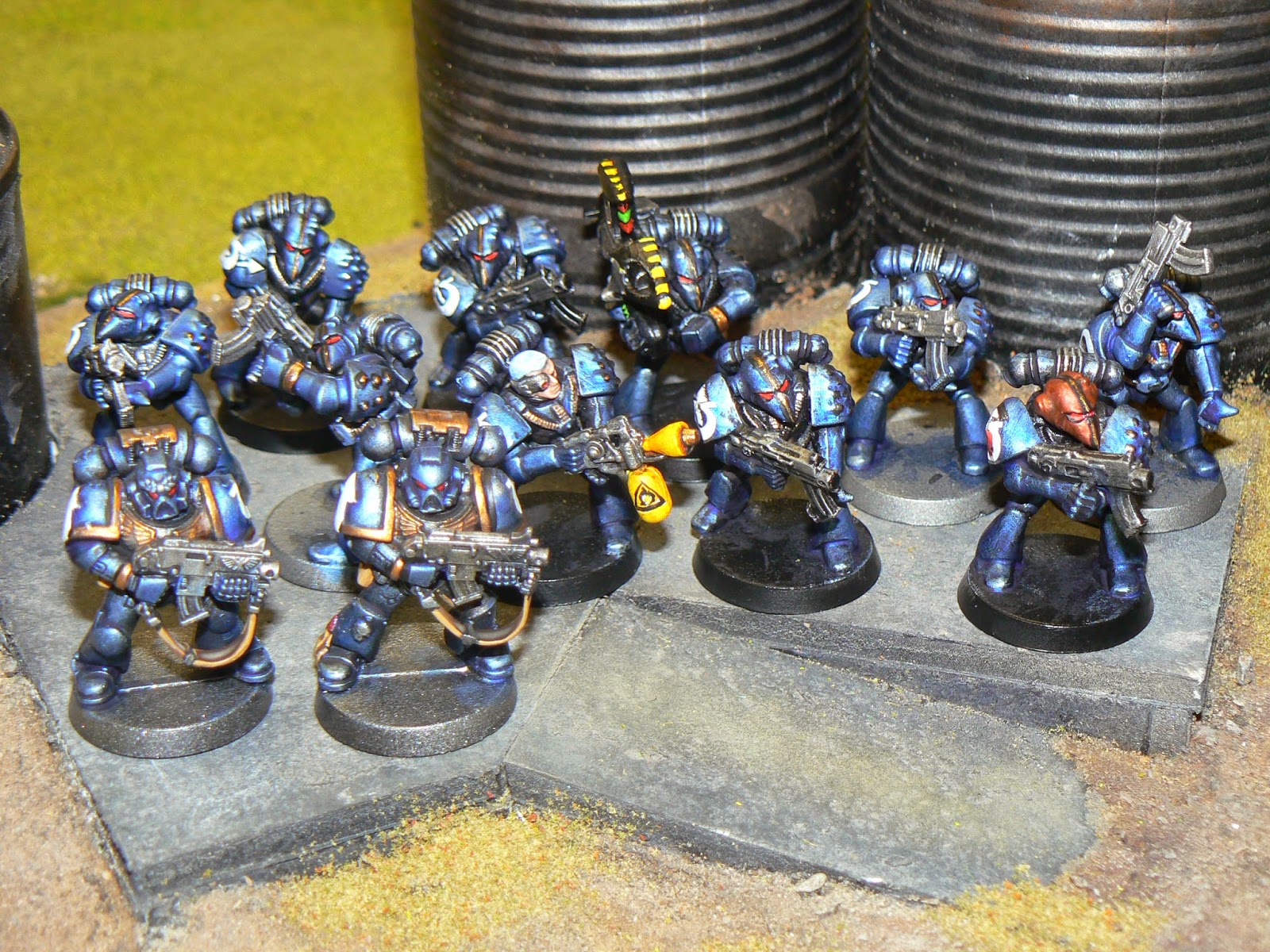 How did this happen?

Gorka Morka. The Rioteers get mobile and hostile!

The idea was a simple one.

Then the Warmachine Journey man league kicked in and sucked up all my hobby time (and any enjoyment I actually got from the game!).

But I have perservered and the Rioteers are now Mobile and Hostile.

I ACTUALLY HIT SOMETHING IN WARMACHINE!!!!!!

Still lost, having left Lylyth on one health point, and forgetting the long gunners get two shots if they don't move probably lost me the game but hey......... I actually hit something.........small victories!

Email ThisBlogThis!Share to TwitterShare to FacebookShare to Pinterest
Labels: Warmachine

This post is very much inspired by Asslessman's blog leadplague which I cannot recommend enough!

"You called for us Commander Denzark?" 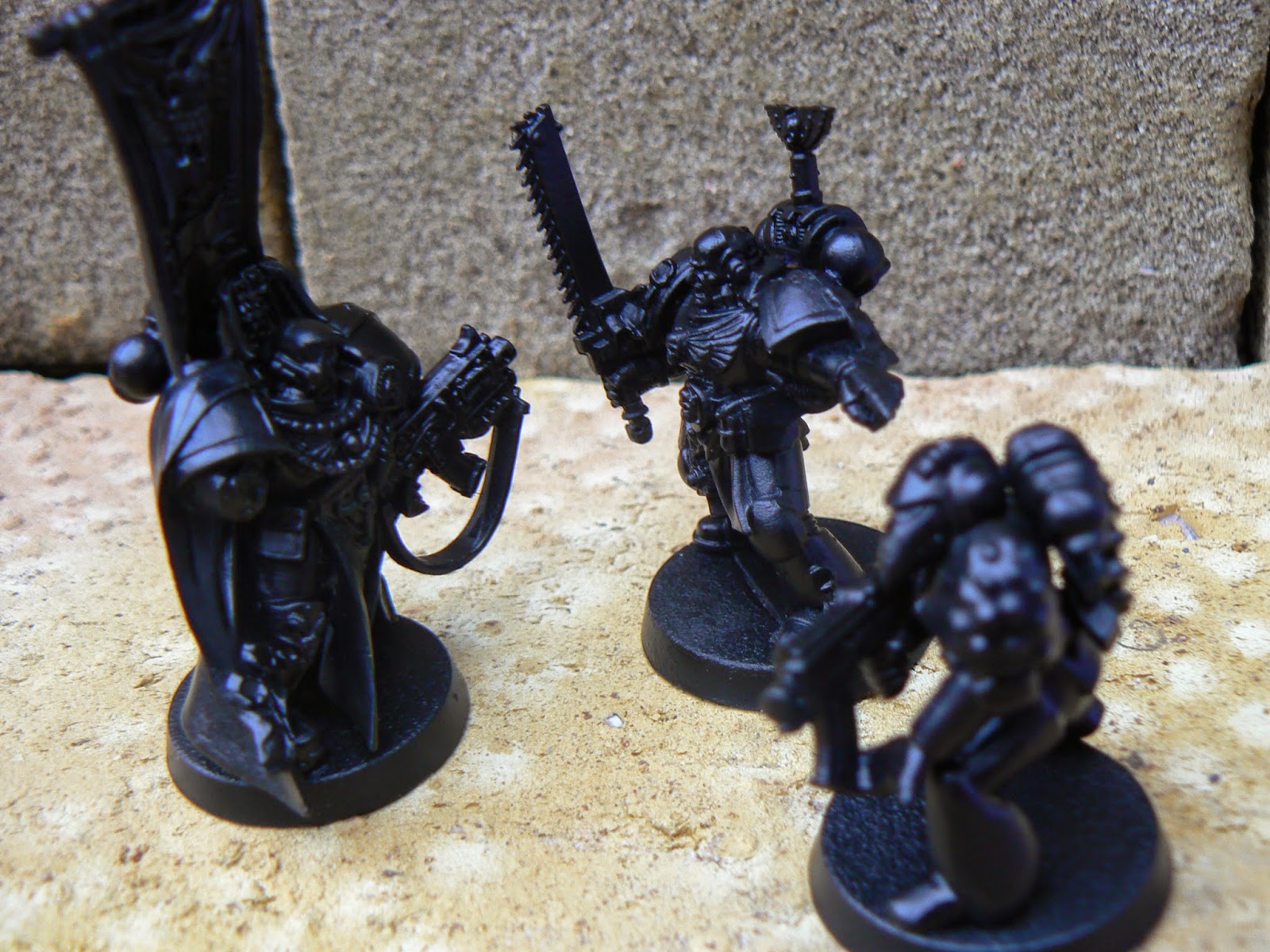 "Yes, come in Sergeants, I have a mission for you both". 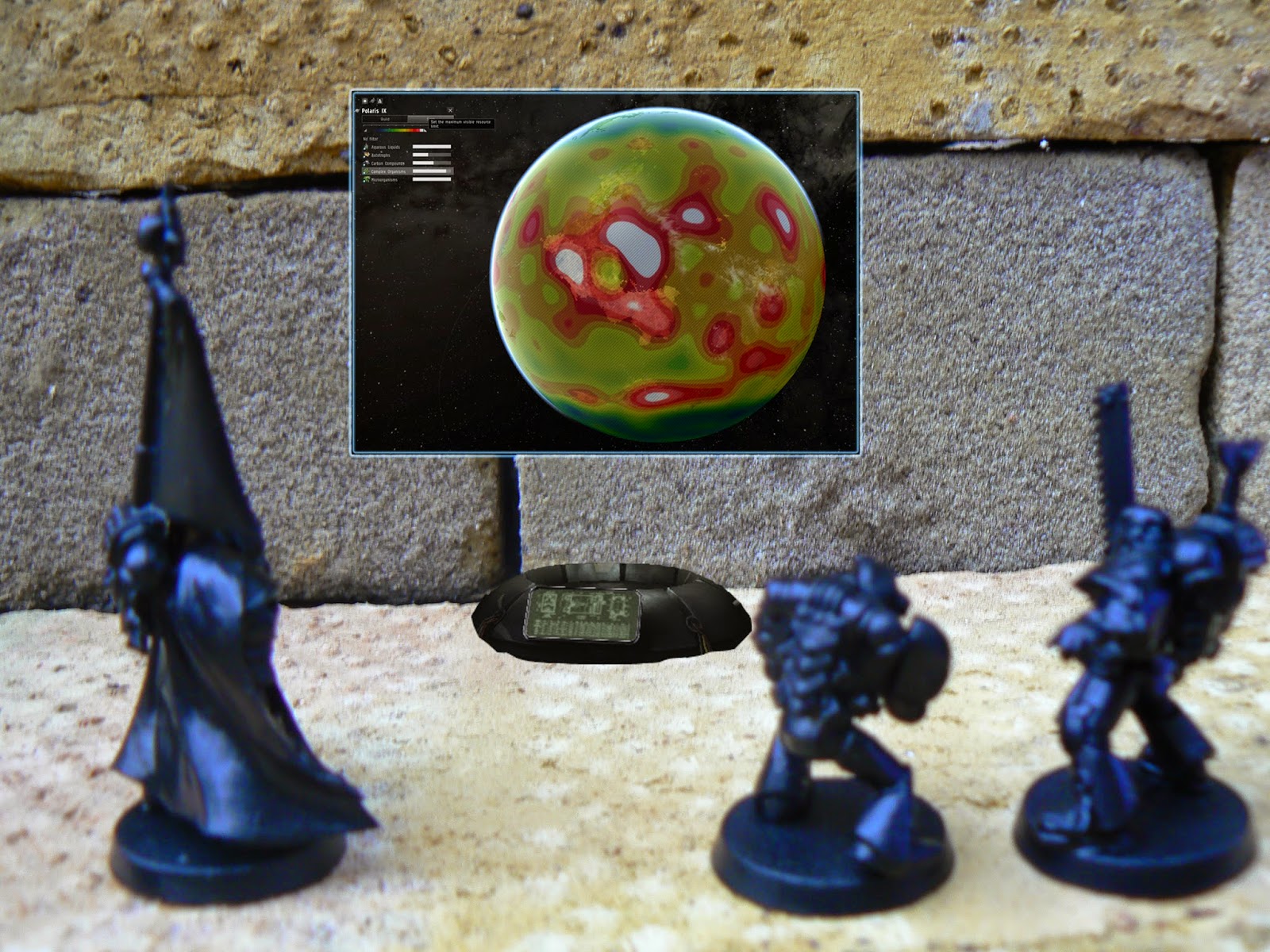 Once again Al and I meet up for a game.

Then the words I dread to hear "I'm a little Space Hulked out, We haven't played Warmachine for ages, What do you think?" 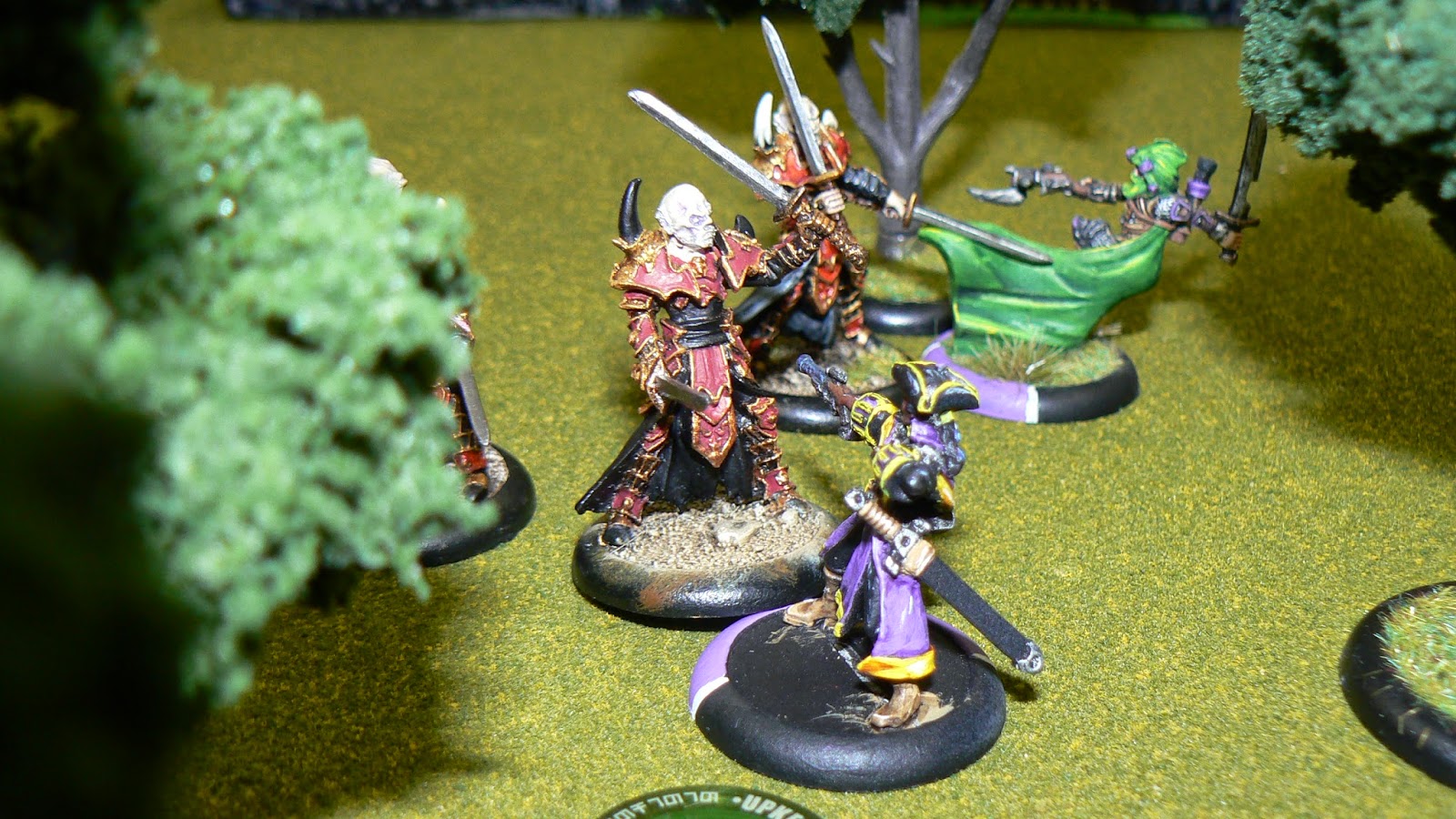 What do I think?

If I hate Warmachine, it's time to pass on the hate to someone else!

It's still all FOC'ed up. 25 point taster vs Ed

This Sunday Ed and I decided to try out our 25 point lists before next Fridays league games.

Why do I put my self through this misery? 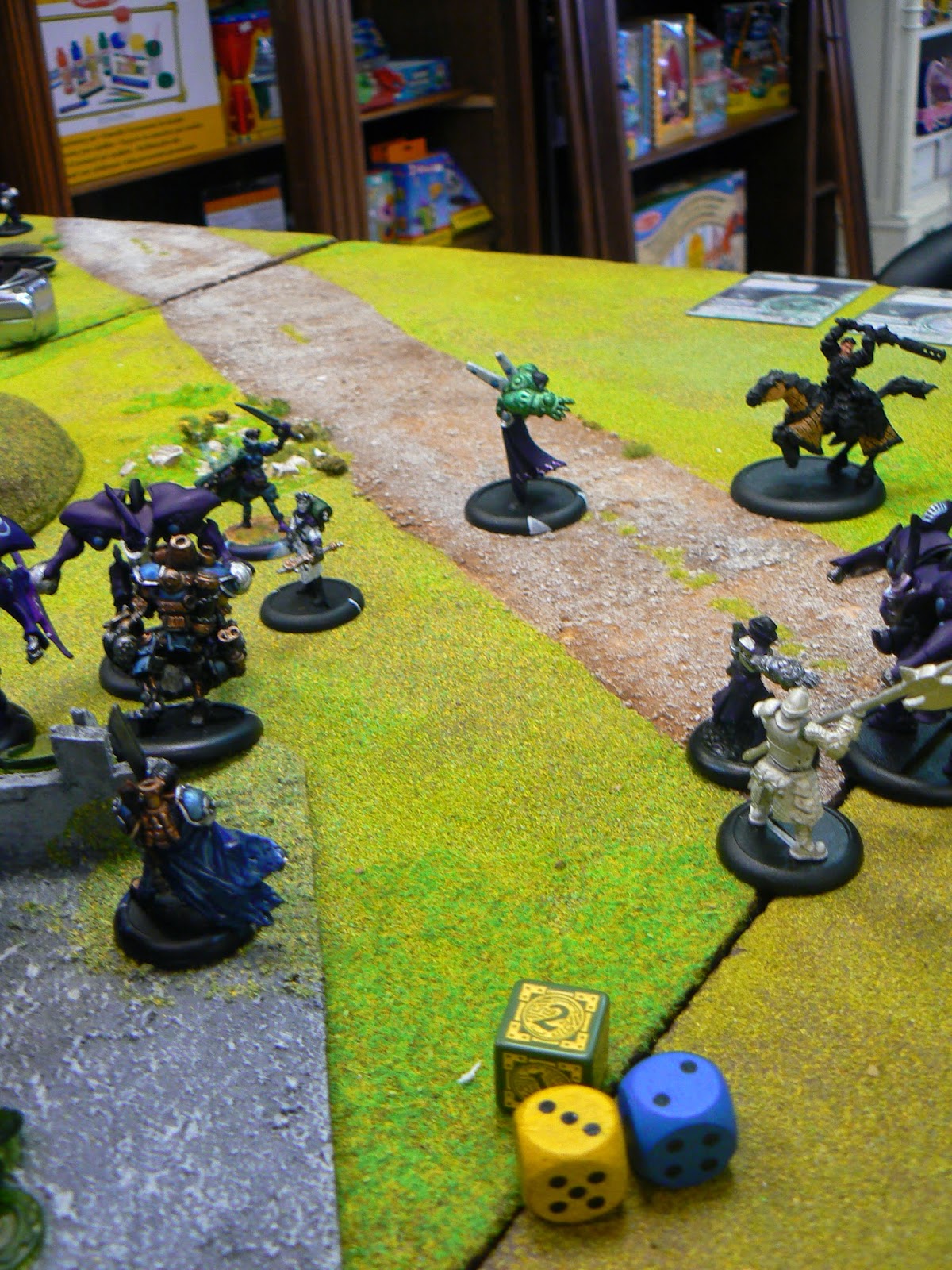 It's all FOC'ed up! Journeyman league games 3 and 4.

Week two of the Journeyman league and it's 15 points of Heavy metal chaos at the Armoury gaming club! 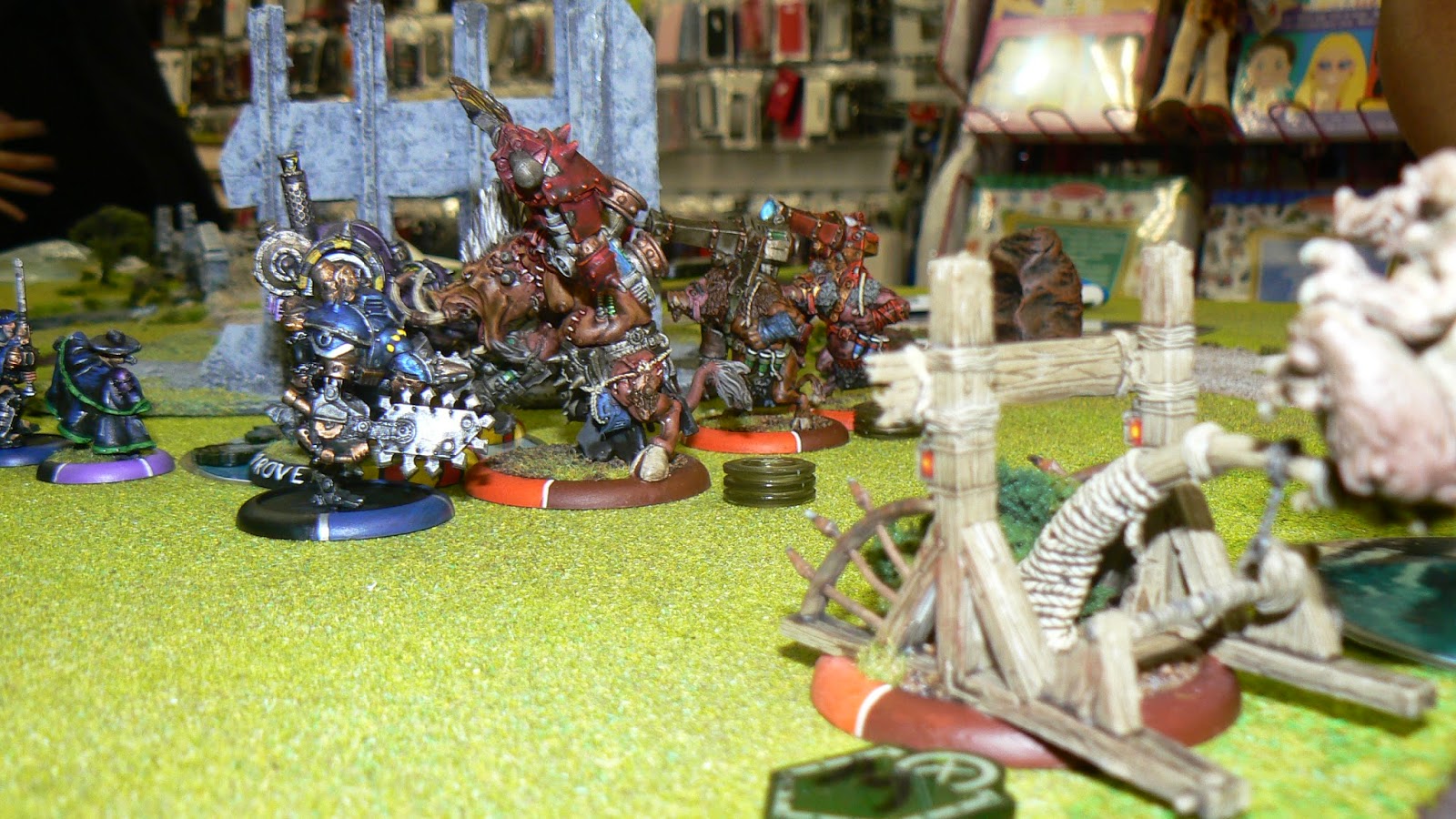 So after the misery that was my Journey man league experiences last night I needed a game of Wee Machine! 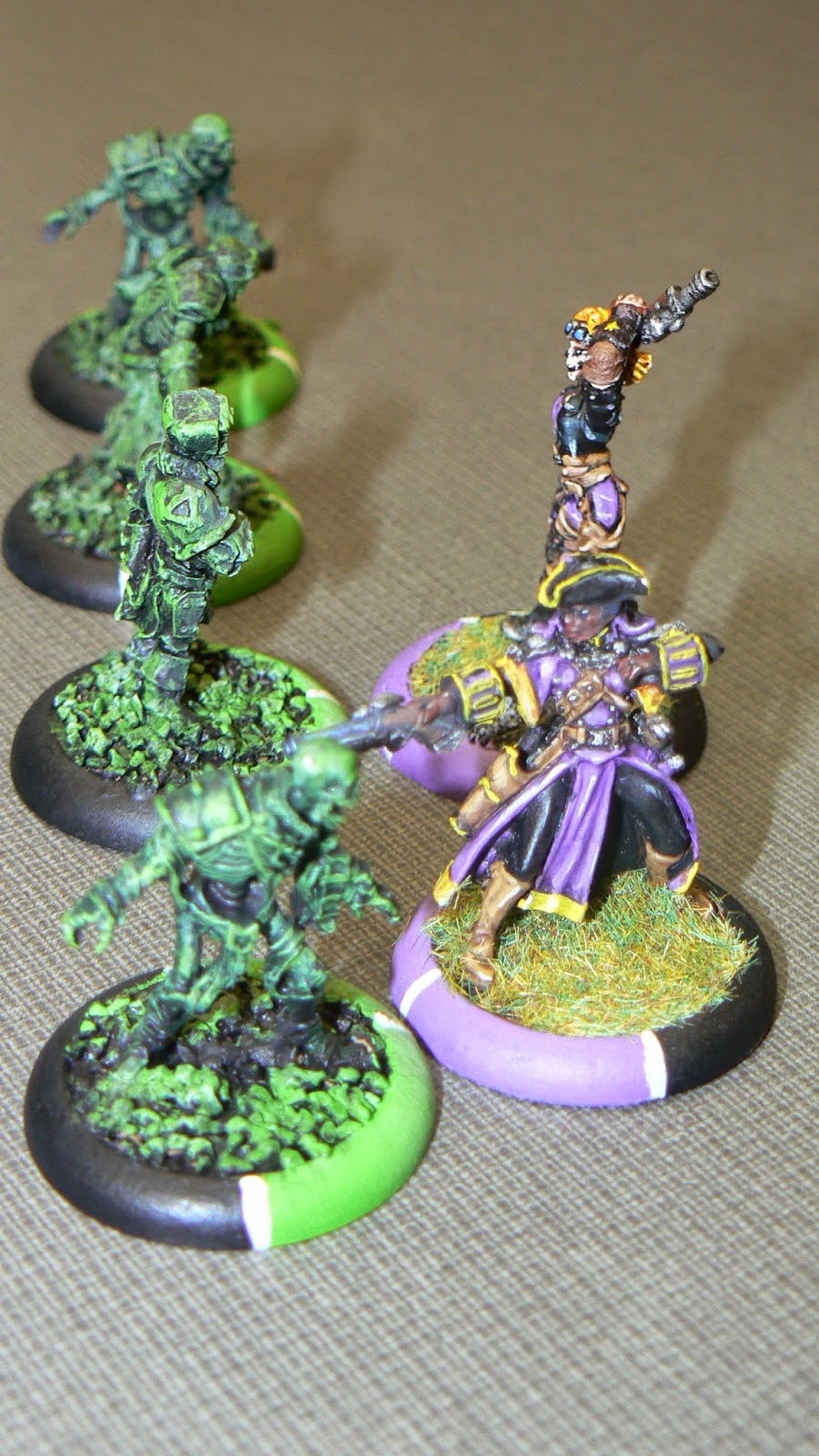 What is Wee Machine?


Basically it is Warmachine I play with my kids.

Al and I are on a roll and have once again managed to meet up for a third consecutive Thursday.

Just a quick post of some photos for a potential Warhammer Ahoy event next year (fingers crossed). 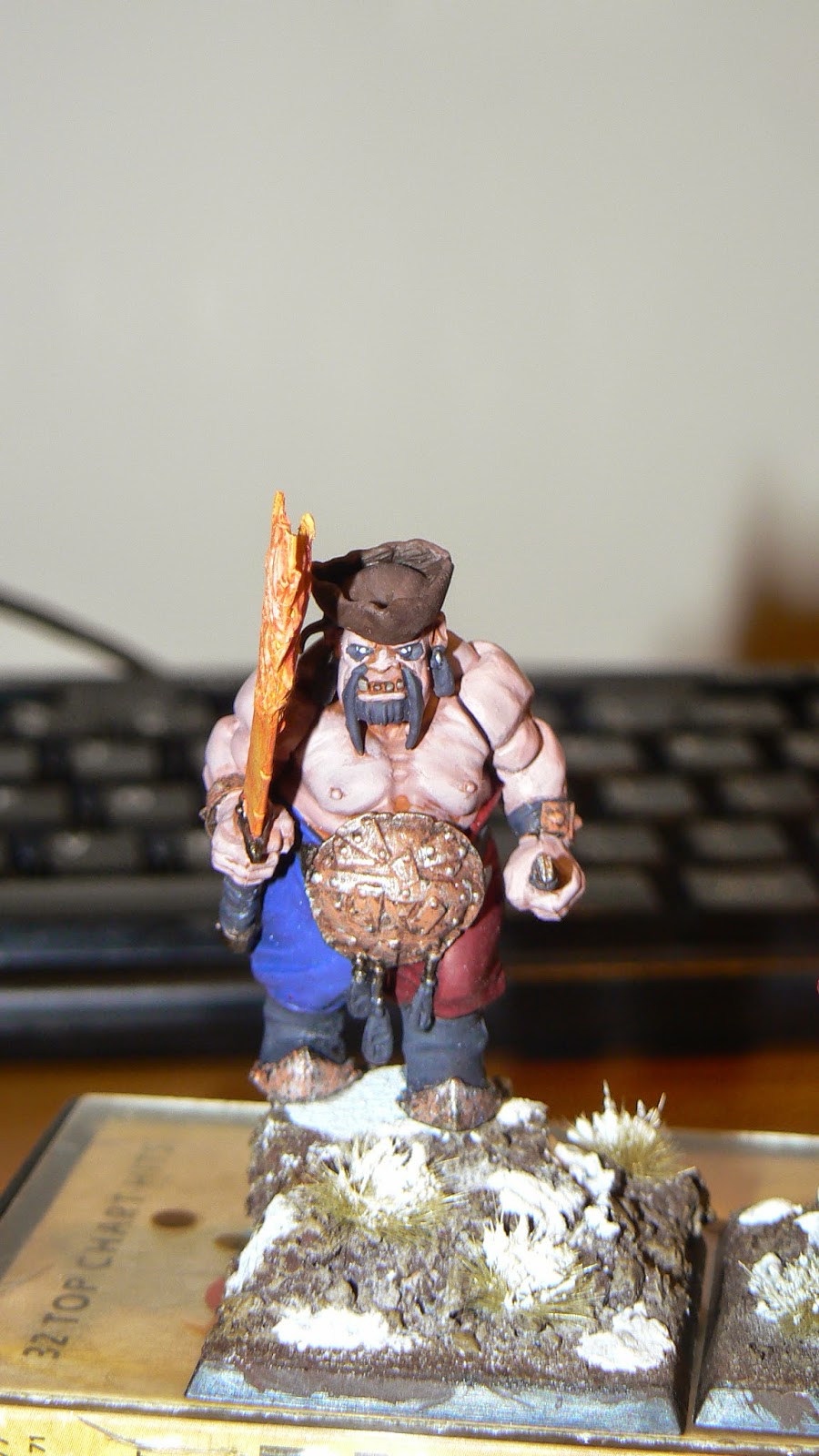 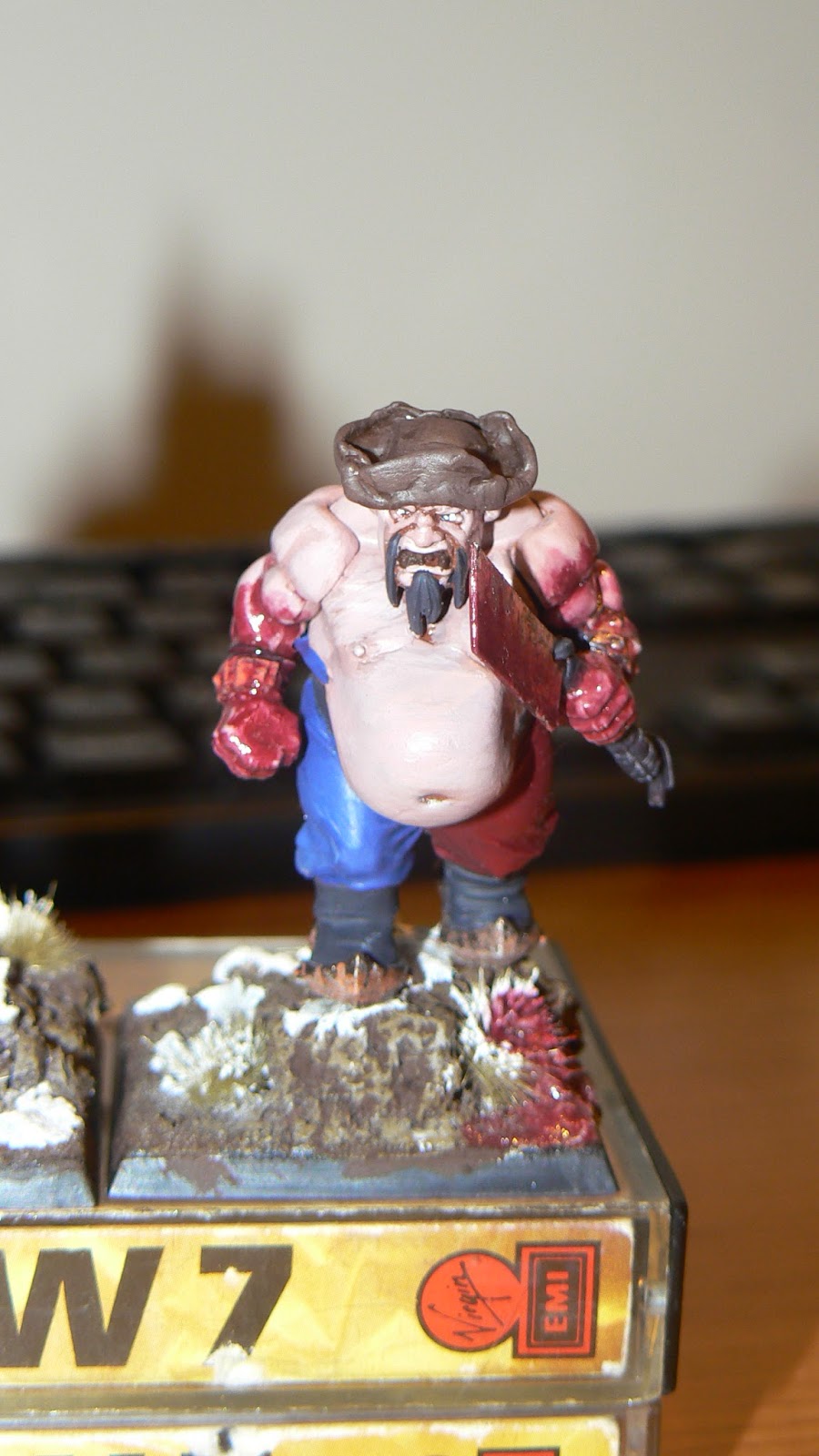 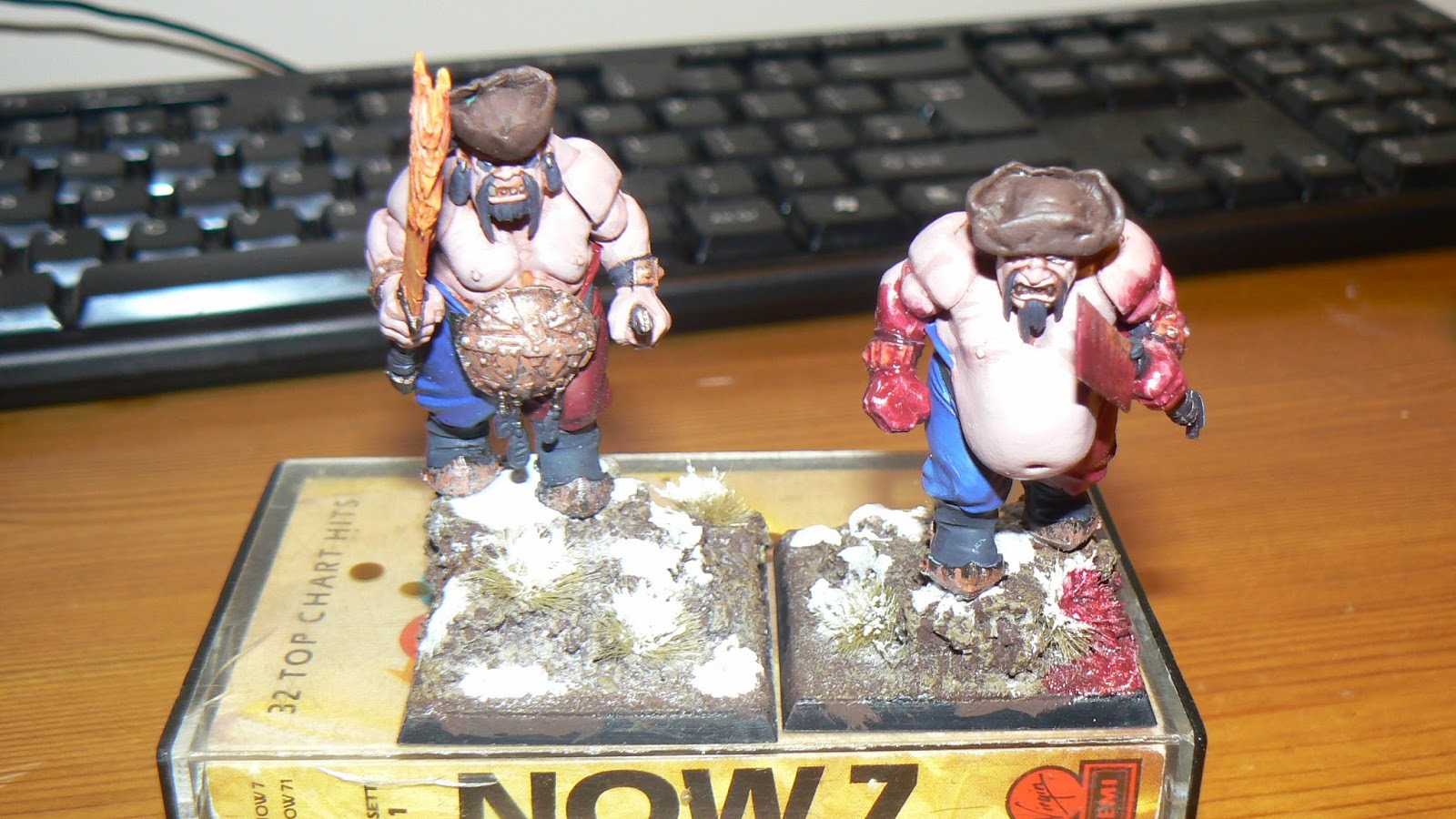 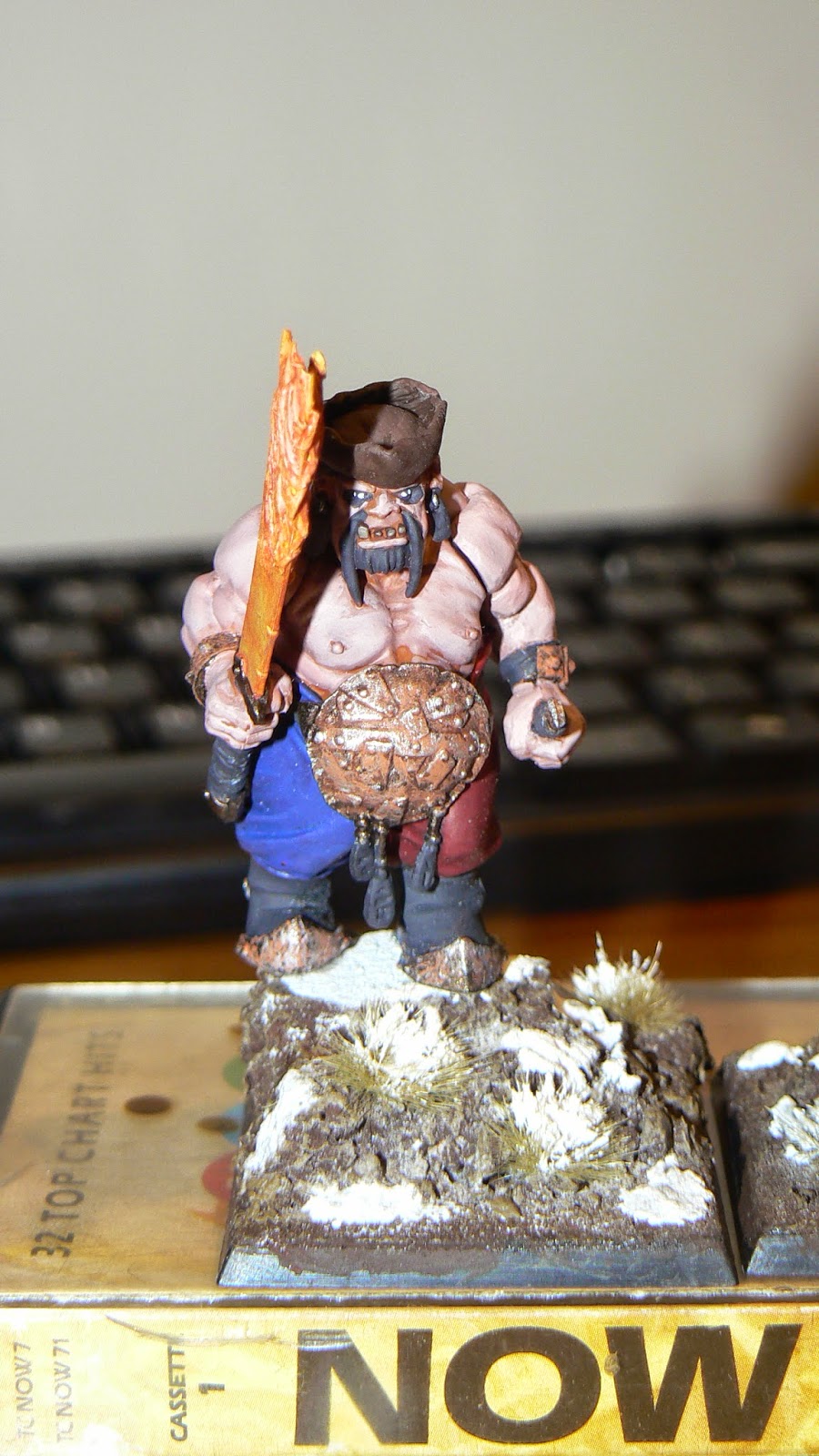 Saga on the super cheap!

So I am skint at the moment and I mean really skint!

Summer is a crappy time for toy sales at the shop before the Christmas rush, we have had a MASSIVE amount of building work done on the house and the summer was spent at several holiday camps due to the profusion of dust, builders and disruption at the house.

All this comes at a time when Jesus George introduces us all to Saga. Typical!

I want in but as you can see from this post I cannot excuse buying another load of miniatures! This has to be cheap and I mean SUPER CHEAP.

I would love to support Gripping beast on this one but there is no way I can excuse £12 for some die.

The Gripping Beast forums provide printable sheets where you can cut and stick the symbols on but I found these tend to fall off mid - game ("of course I rolled 6 rares! Honest Guv."), which is far from ideal.

In the end I pull out the brushes and 15 min later, voila!


The hardest thing about this is not painting extra "rare" symbols on to give my self an unfair advantage. One spray of varnish and their all done.

I was loving the league, lots of players in attendance, the games are fast and furious and the swap around times were minimal as no one could spent 45 minutes perusing over a huge stack of cards thinking about what they were going to field next (you know who you are!)

10th of October the official start of the Armoury Journey man league witnessed a full house at 51 Station Rd and a cracking set of fast paced games to boot.

As soon as I saw Anthony was in attendance I know who I wanted my first opponent to be!

It's Thursday and I have two choices; Playing Space Hulk with Al or watching England Vs San Marino!

So its ORCTOBER a celebration of all thats green and good!

It starts innocently enough. If I have a bloodbowl team, I need some bloodbowl fans, Right!

It also gives me the chance to buy any miniatures I find interesting which I would not have an excuse to buy otherwise.

Barn Dance anyone? 30 points of Warmachine


After a long hiatus Al and I finally get to lock horns again via Warmachine.

Rebel vs Traitor the eternal struggle between Al and I

White Dwarf - Have you lost weight?

During the summer I picked up a load of old White Dwarfs for 50p each at a hobby shop in Clacton on Sea.


All this old skool goodness for £6. RESULT!

I also acquired a recent issue of White Dwarf (which thankfully I did not have to pay for).

I know it's now a weekly, but seriously, I flicked through several times  but it reminds me of a lot of the women I dated in my 20's; slim and pretty but not much going on upstairs.