introducing the first signing of "Her Majesty's Gentlemen of the Realm Bloodbowl Team" God bless the Queen.

First shots of the colour scheme for the all new "Gentlemen of the realm", 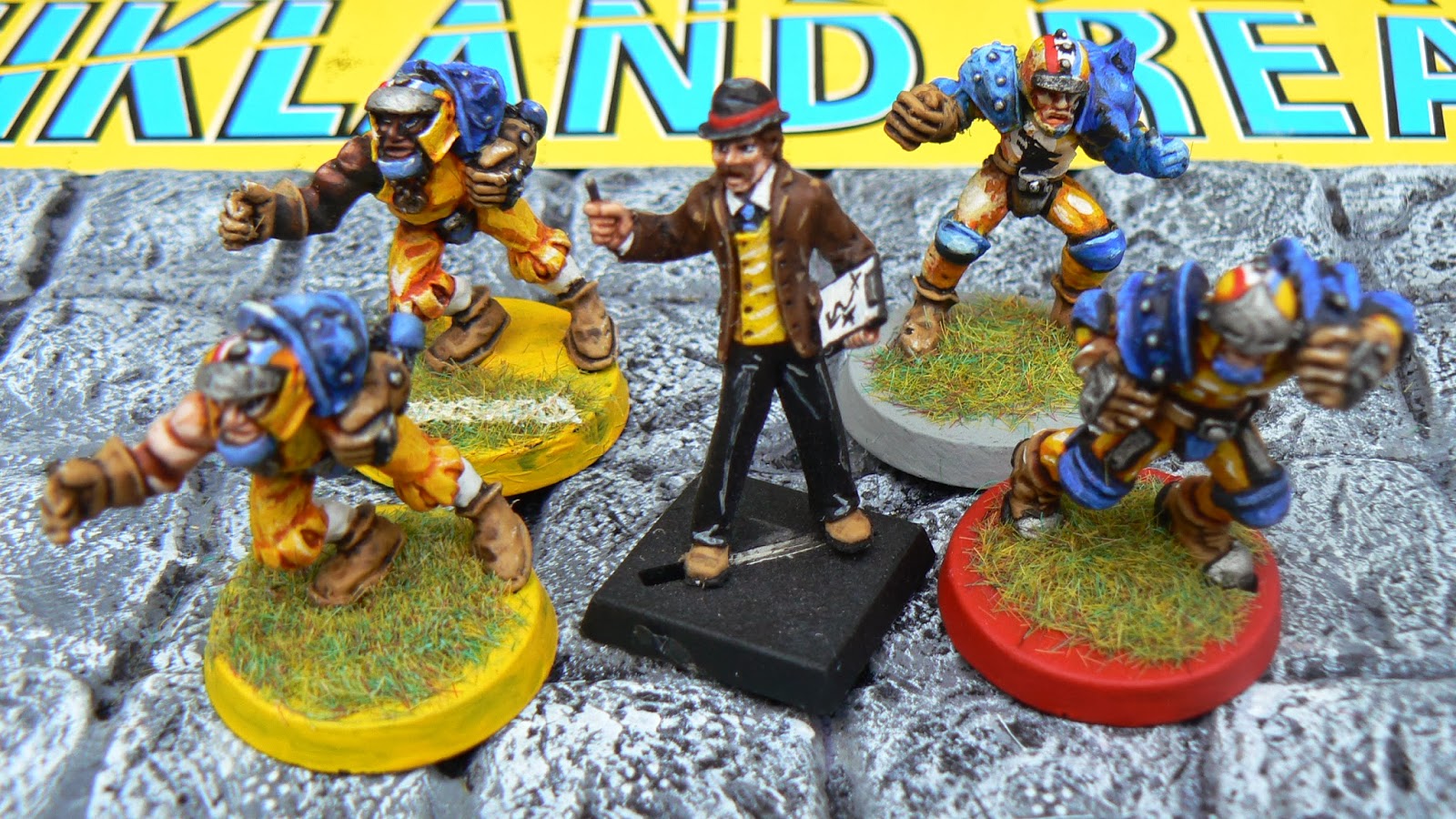 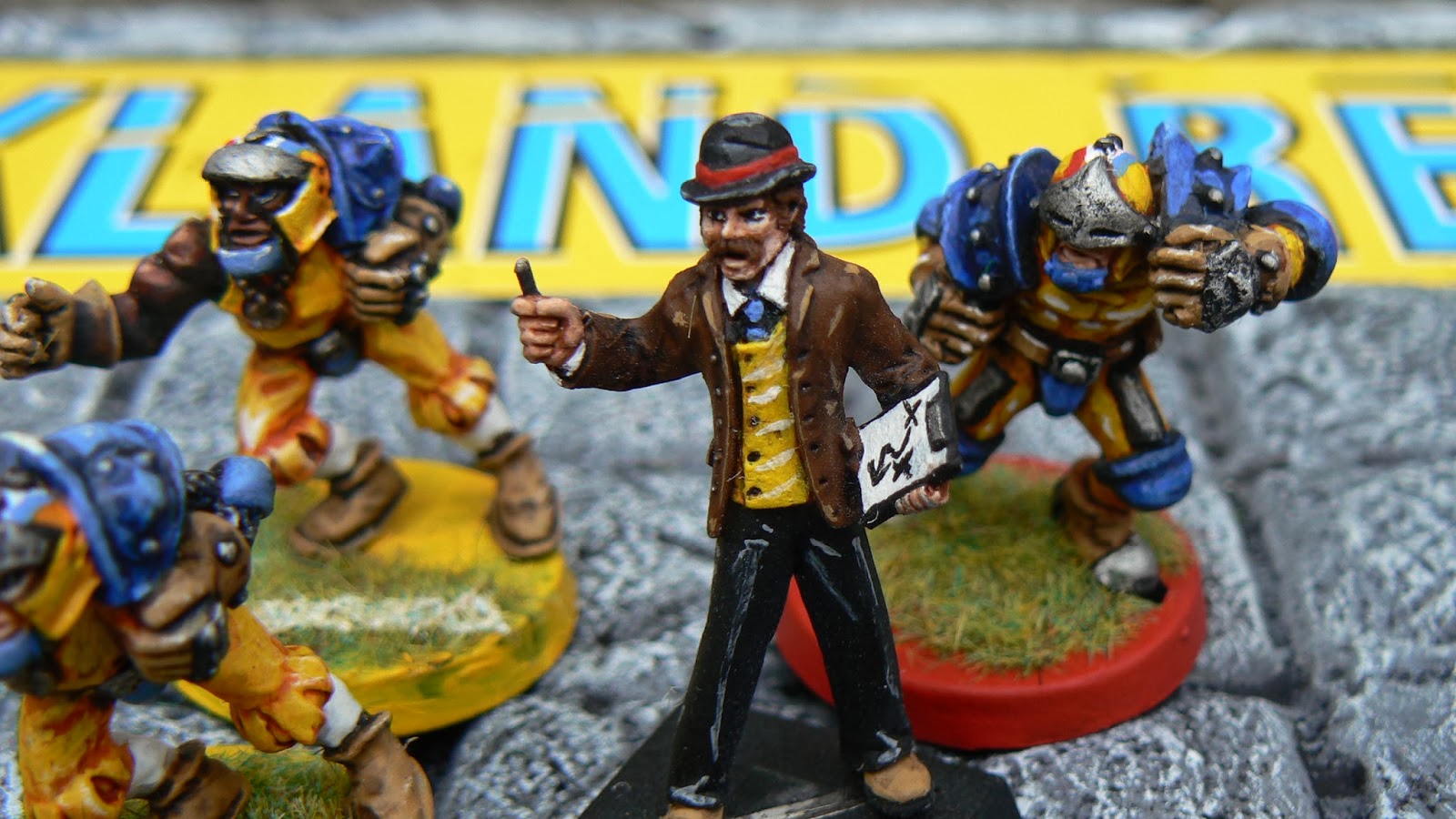 The yellow and blue is from the Reikland Reavers human team uniform team and is one my brother wanted to keep as he has always played as the Reavers.
Truth be told it is a great choice as the colours really compliment each other and really make the minis stand out against the astro granite.
The red white and blue stripes on the helmets tie in with the union flag.

We have decided to go with the victorian theme as it is a period he loves and with the sci fi fiction of the time it could give us some interesting choices with star players. It also allows us to add in players from all over the world. I already have my eye on a Reaper mini which would look great as a Kicker and would be from the victorain colony of Hong Kong, the link is here
Posted by riot ville at 06:01 1 comment:

So here is is Sam "the colonial crippler" MacHorn. Coach of my Human Bloodbowl Team 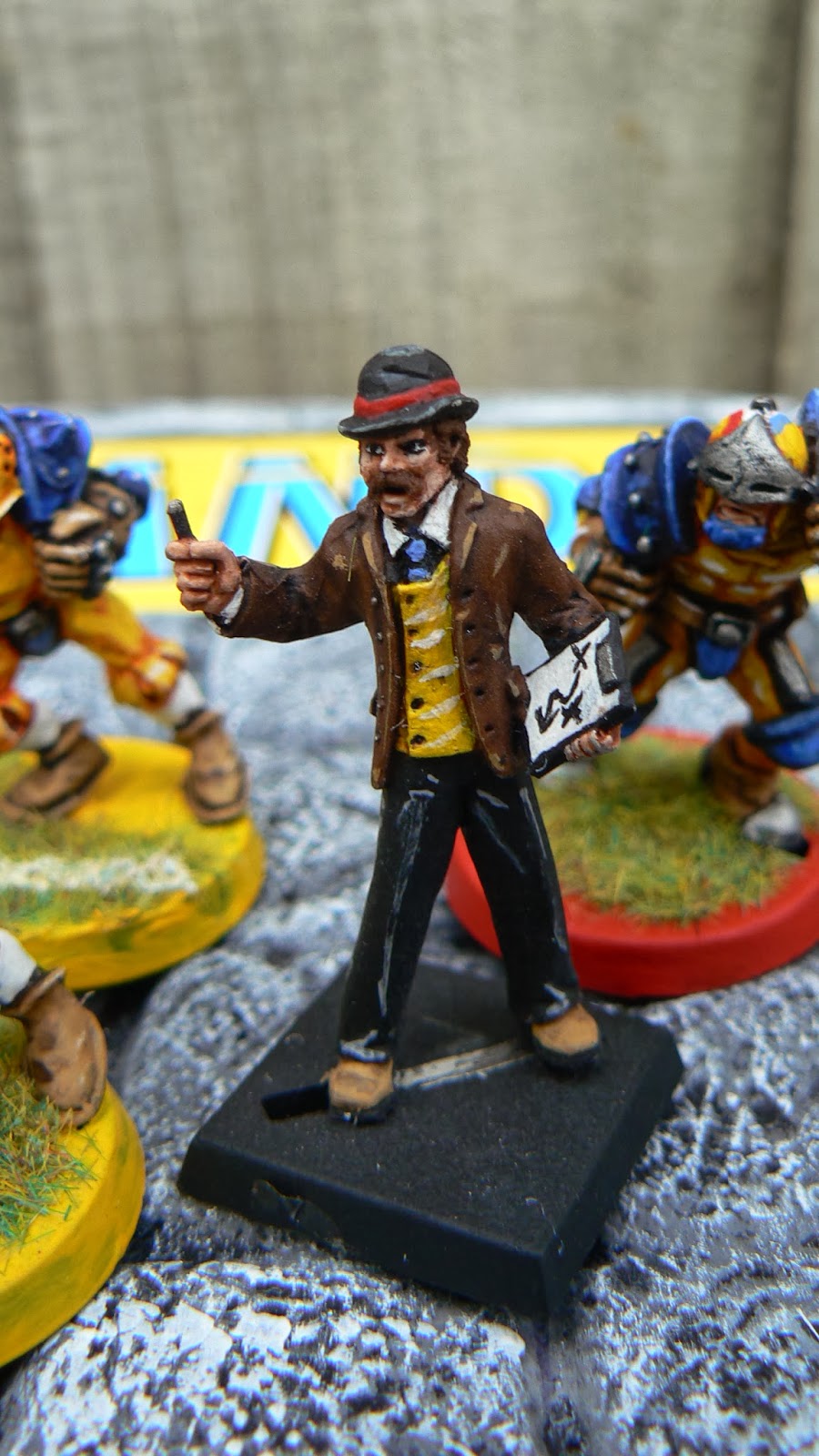 "Originally from Her Majestry's former colony of the United States of America. After making his name in the Colonial League as a Chucker of renown he was Transfered to London for a Record breaking amount of £10 sterling.

Now retired, he has taken the helm of Her Majestys Gentlemen (some would say by the scruff of the neck!), and reforged them in his own image. Only time will tell if entrusting the Jewel of her Majestry's Realm in the hands of an uncouth colonial will bear fruit".

So here is is the mini which has proved the inspiration for my entire Human blood bowl team.

He is a reaper mini I spotted on my original visit to the miniature empire Gants Hill. My brother is obsessed with Regency bare knuckle boxing and is often seen "chapped up" in a 3 piece suit. As soon as he saw this fella he knew this was his proxy!

His blue tie and yellow waist coat are in keeping with the team colours.

Here is the original reaper miniature

Here is the reaper homepage and I can not recommend these miniatures enough
http://www.reapermini.com/

And if you do want a Reaper mini please check out Carlos' ebay shop. He is the owner of the Mini empire gaming shop and he is a top bloke and his ebay feedback speaks for itself

Another good week of light so cracked on with the painting.
This week it is 2 loft finds. They are the same figure but are the only version of the human catchers I like which are in keeping with the theme of the team I am trying to create (more on that next week).

Have always found the simplest way the make the minis look different is to paint them in different skin tones, especially within a force which wear simular outfits or armour (like space marines).

So here they are 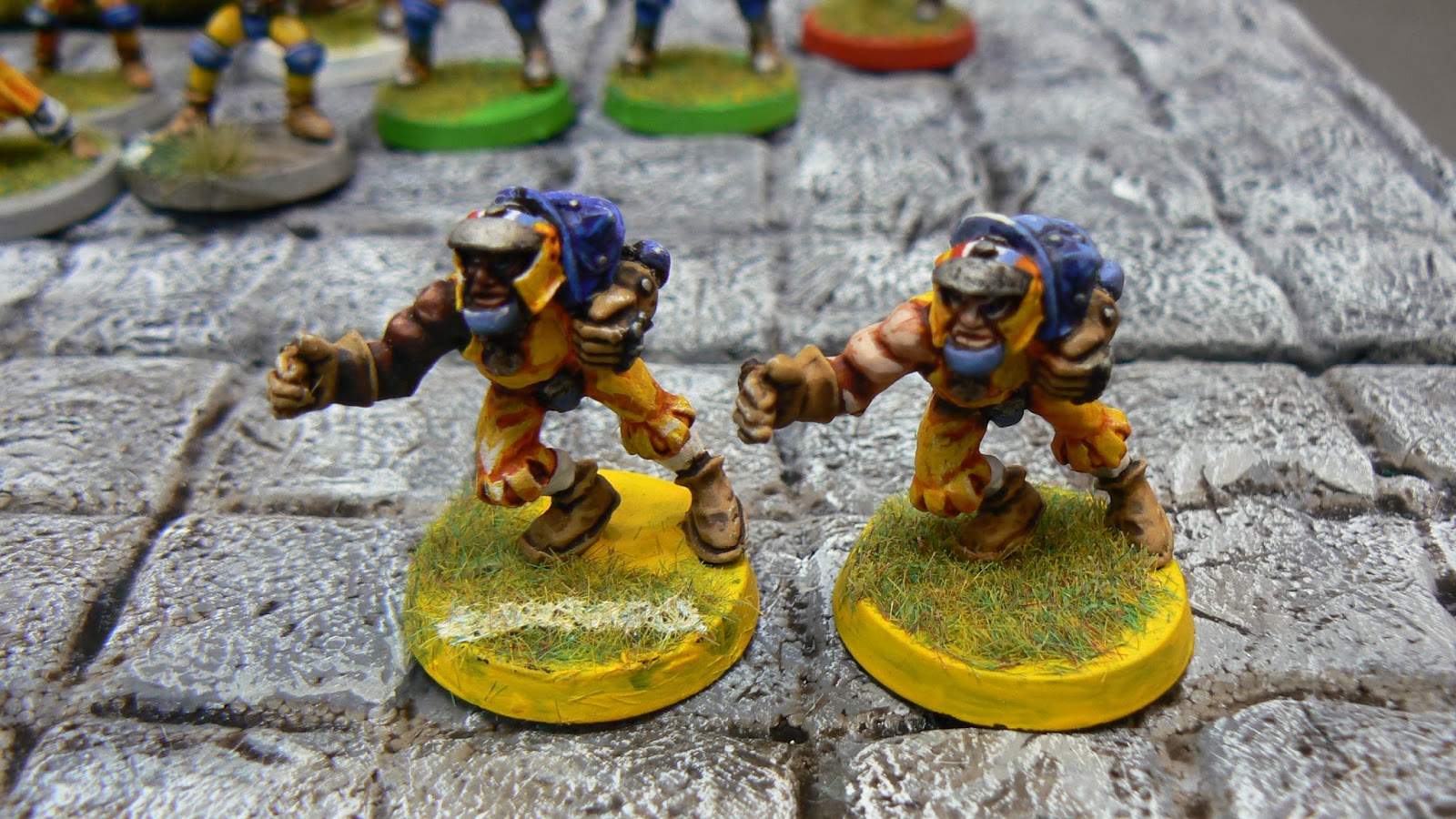 To be honest growing up in London I have never agreed with the homogenised society which is often promoted by fantasy / future wargaming, and again it is a theme which will run through the human team.

Email ThisBlogThis!Share to TwitterShare to FacebookShare to Pinterest
Labels: blood bowl, Gentlemen of the Realm, Painting

Impact Miniatures, Goblin Referee, well the orcs should be able to cheat as well!

Received the first of my Ebay purchases this Friday. The light was perfect for painting today so I decided to crack out the paints.

Really happy with the way it turned out and the two do look good together. 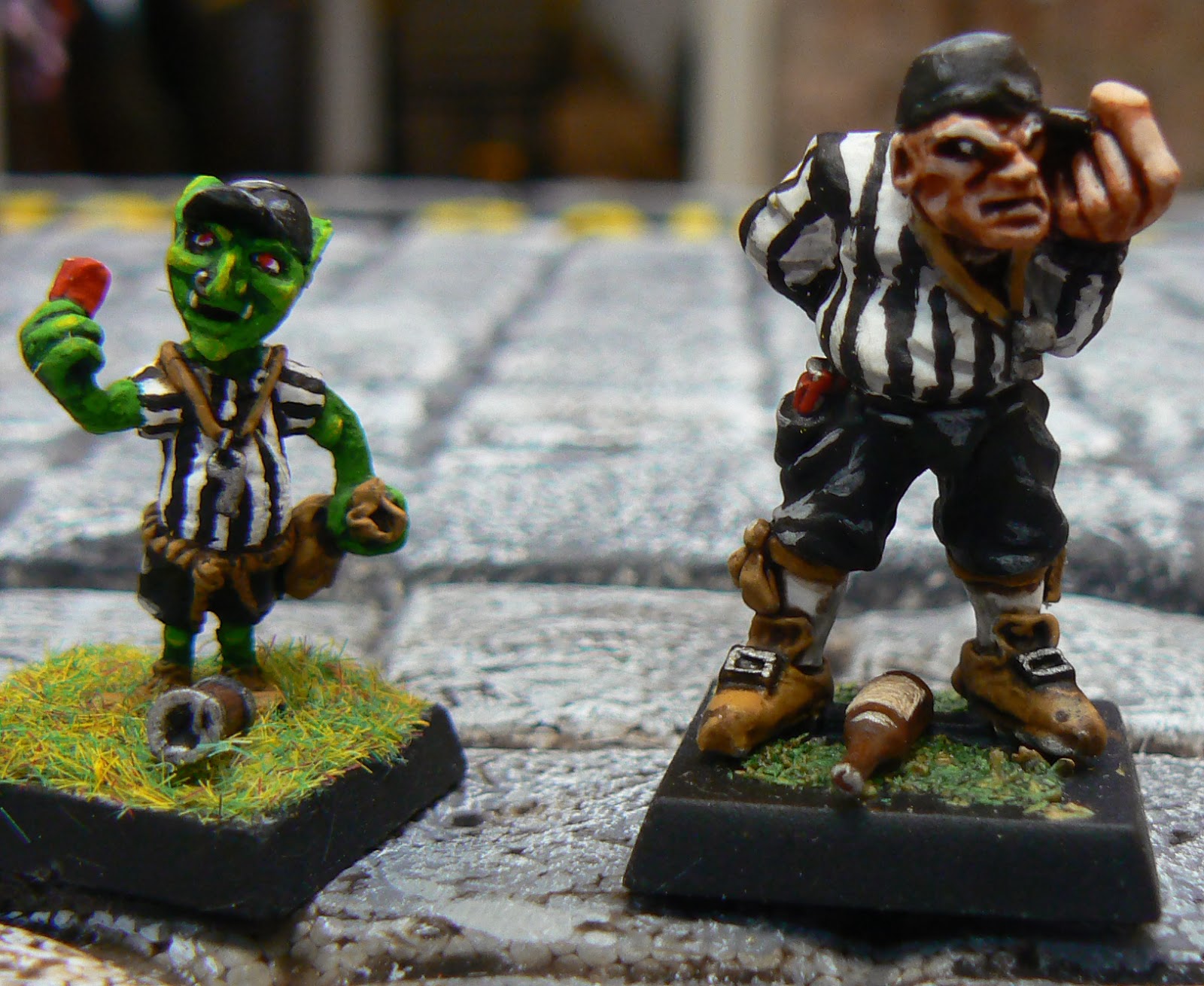 Like the casting of the Impact mini, I do not know how big a company they are but it is a really nice miniature to paint with lovely clean lines and detail. A joy to paint.

Much happier with the white eyes and red pupils and think I will run with that theme through the Orcs.
Painted him looking up, as I figured he will mostly be looking much bigger players in the eye when he issues his red cards.

Stuck the tankard on the base to tie the two minis together. It is from a set Reaper miniatures produce.
Posted by riot ville at 15:04 No comments:

I know it seems like the wrong place to start with an Orc team but I figured I will get the catchers out the way first as they will spend the least amount of time on the astro granite and therefore they are the best mini's to start with as I can make the most mistakes.

Here are the lads together, have not figured names for them yet but that will come later.
The Orc catcher was first painted yellow and then blended up to white. I then Gave him a couple of washes of green ink (Citadel Biel - Tan green ink [still getting used to the names]). I feel it gives it a cool look and adds a much needed variation I need amoungst the players. 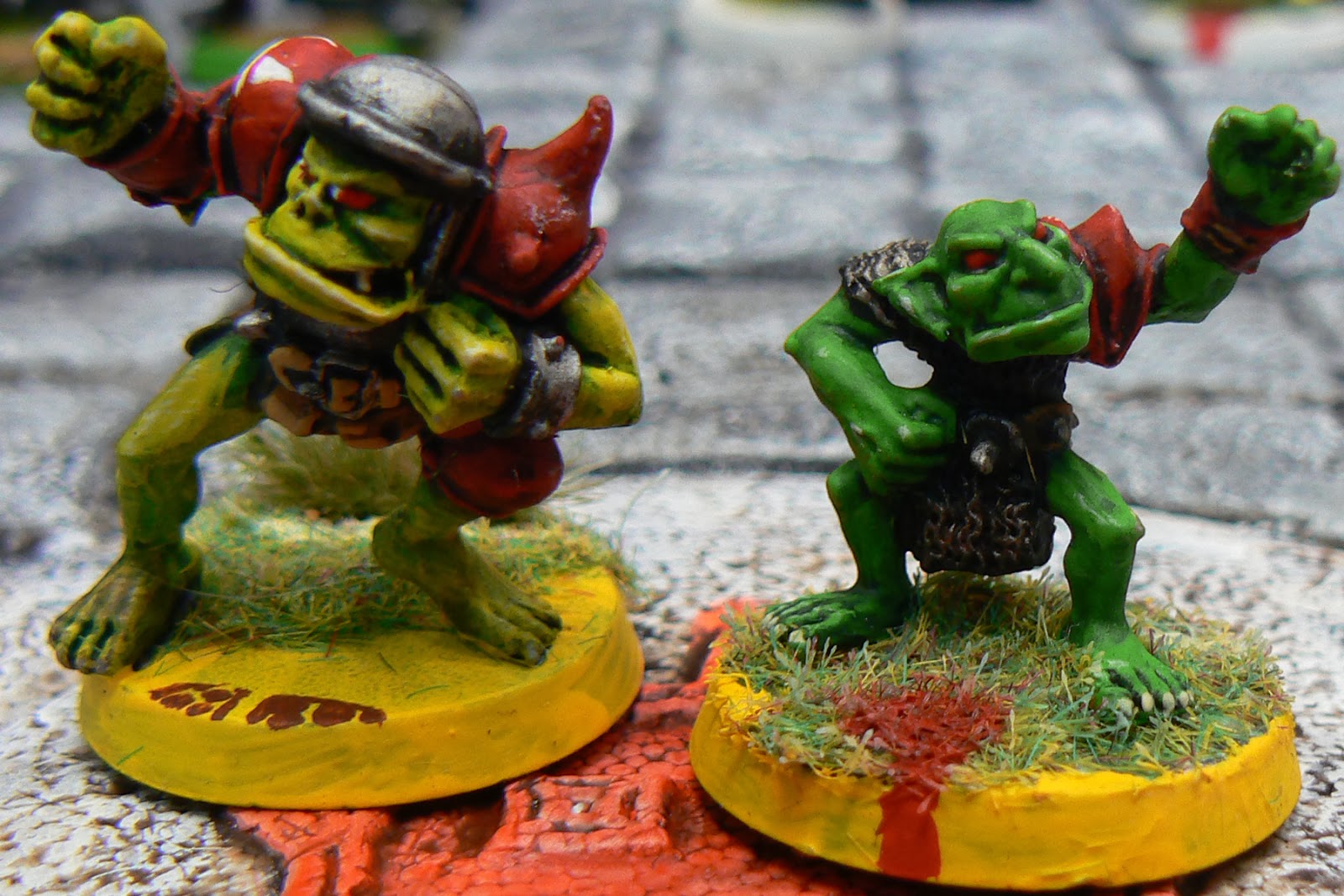 Not completely happy with the red eye / white pupil combo but kind of ties in with the albino look.
Added the muddy boot print to the front of the base to give some variety.

Also finished up an Orc Thrower I started 15 years ago and found up in the loft. Much prefer this one to the later edition models 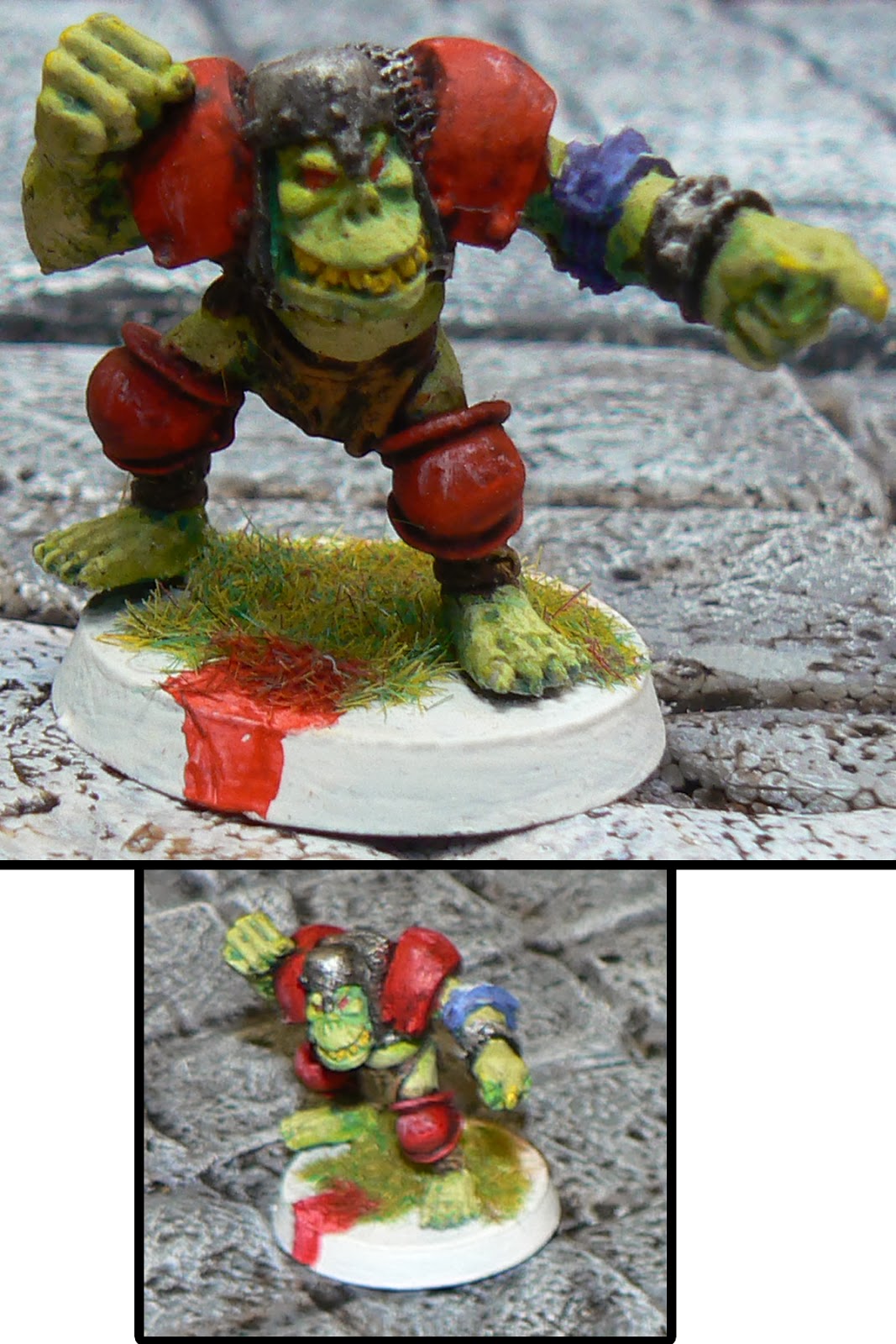 With this one I just decided to tidy up previous mistakes and use the new Tan leather colour on the cloth. The skin tone is from an old citadel paint and I decided to keep it to add variety rather then liking the job I did way back when.

Blood bowl 2nd edition Human referee, controlling the chaos with a whistle and some coloured cards!!

Had a right result on ebay today, just sold off a load of old Mithril, Lord of the Rings miniatures I bought in Hamleys years ago. The female ranger alone has just been sold to Italy for over eighty quid so I should have more then enough to get me started on these teams....ebay here we come.

Another online store which is really impressive is impact miniatures
http://www.impactminiatures.net/index.php?option=home

They are based in Oz so postage could prove expensive but if nothing else give you a good idea of what is out there, have an eye on a few of the minis as I am not too impressed with the new lines of bloodbowl mini's GW brought out for the 3rd edition, especially the human minis. 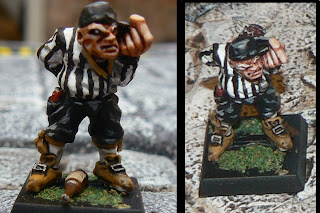 The flesh and leather are P3 paints from priverteer press which I really like and are new to me as a painter.

The bottle on the base is made with green stuff which I just rolled between my fingers until it looked a bit bottle shaped. I figure the ref has either been drinking on the job (and who would blame him) or it was "donated" by a spectator after a particually poor decision.

Need to work on my shading of black cloth but other then that not a bad first effort for flesh tones.

Finished the first of my Orc team players which ironically is a goblin.

Pulled out the Goblin catcher first as it is a simple miniature to paint with clean lines and it is small so it is easier to cover any mistakes.

Gone for the classic red armour as it contrasts well with the green skin. The rest of the colour scheme will be a standard tan leather and chain mail, this is because;
1) it reduces the number of paints I need and
2) I think it is in keeping with the feel if the Orcs. 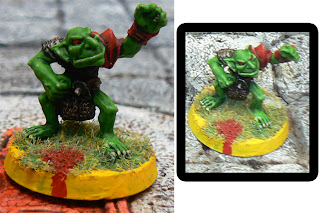 I think I might be a little too subtle with the blending when looking at him close up but like the look of it at arms length ( [the smaller photo] which is the distance you really look at a miniature anyway). Painted the base yellow as that was the catcher indicator in the original game and I thought the blood slatter on the grass helped it pop, but will use it sparingly.

Before hitting the Bloodbowl mini's I thought it would be a good idea to get my eye back in. First victim is a Space marine terminator from the original version of Space Hulk (another old game that gets an airing every now and then).

Its only a 3 coat effort and everything got a coat of brown ink, a simple affair but it was a fun, if crap first effort 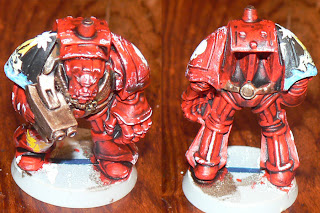 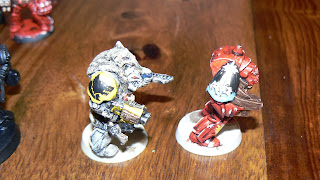 The shoulder pad is from my original chapter called the Bastions of the Emperor, I still like it but the fellas at Miniature empire where good enough to give me some free transfers so I think I will use transfers for the rest


One thing I have noticed is how Terminators have grown since the original versions (I mean in size not use),
Below is a picture of a Space Hulk original, a mid 90's space wolf terminator (a loft find a originally painted in the mid 90's, and a modern effort I picked up to practice on). 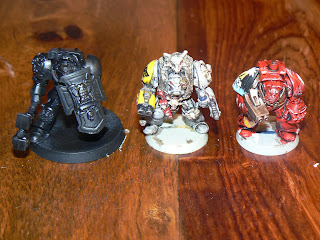 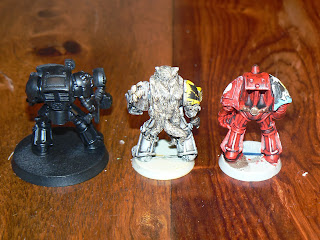 Got to be honest the new resin models are looking really nice....... Blood bowl focus on Blood bowl!!