Just a quick one before a proper post tomorrow.

Another cracking session on Wednesday. One of the lads turned up with his own painted miniature. I had to smile when I saw he had used his Dad's old enamel paints!

Here is how the table looked. 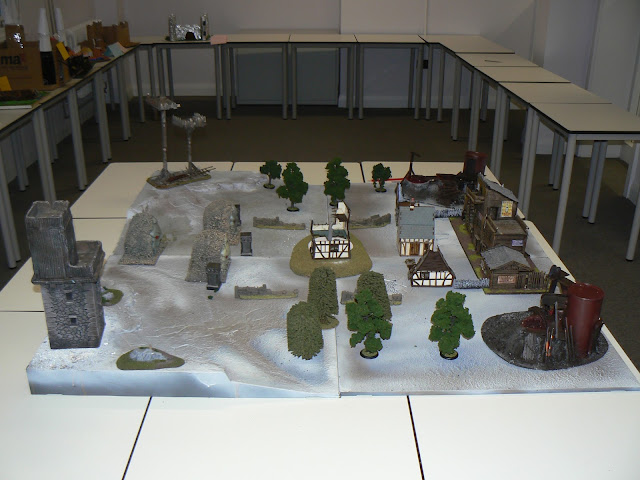 It was a standard 'treasure hunt' scenario. I gave the students some clues about where the treasure was hidden and let them go at it.

Bit surprised when they did not spot the most obvious clue.


The winning warband won enough gold to buy their own equipment and recieved their own miniature which they can stick together to represent the kit they buy.

Had to smile when I caught one of the kids reading through the equipment handout I had given him and was working out his equipment in 'prep' class when he should have been working on his additional learning tasks. Had to give the kid a detention but to be honest I would have done the same thing; work or wargaming. . . No contest really! I am supposed to be doing work right now!!
One surprise result of the enrichment club is pupils have started spontaneously turning up to school with their own scratch built castles after seeing the gaming board!

We ended up with enough entries to run a compertition!