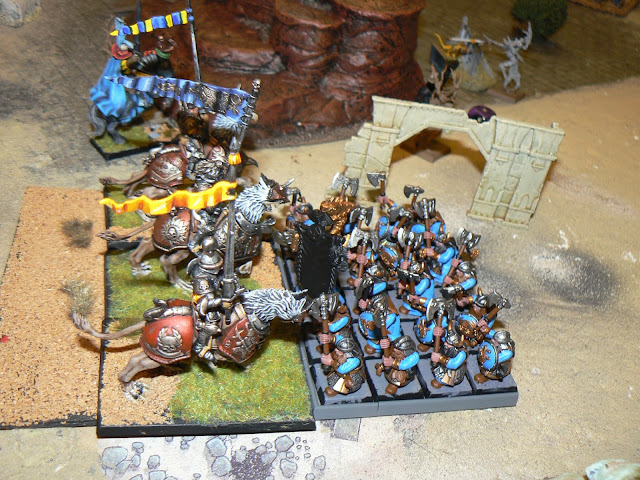 General Custoras bloody hated spiders! He hated this particular spider even more then the tiny, sneering, green, miscreant sitting on its' back!

At least the Gobbo had learnt to fear cold, sharp, Imperial steel. Unlike the giant arachnid he was riding which had cowled his beautiful Demigryphs.

Custoras turned away from the baleful, red eyes of the Goblin General and surveyed the other participants of this parley.

The Slink Priest stood there, alien and aloof. Rags had told him that the Priest was probably following instructions laid down millennia ago by their Gods and Sigmar help anyone who tried to disrupt the wishes of their Gods.


The forth participant was a mystery to Custoras. The Dwarf General was sweating profusely from the climb up the steep hill while wearing heavy armour.

All four armies had fought each other to a stand still in this cursed isle and this truce had been called to discuss terms.

Custoras glanced over his shoulder at his personal body guard arrayed at the edge of the forest clearing, their beautifully wrought, armour glinting in the rising sun.

As he was about to turn back to his fellow protagonists, a small movement from one of the surrounding trees caught his eye. His hand had barely touched the pummel of his sword when the forest had erupted into a frenzy of shrieking, wooded demons!

"Treachery!" he had bellowed at the other Generals!

In warning or accusation no one was sure but the results were the same. His body guard of mounted knights had spurred their steeds towards their General at full tilt as the hill had erupted into a blizzard of movement.

Custoras cascaded down the hill at full gallop.

"I just have to make it to my Knights" Custoras thought "and then we will have our revenge on the treacherous cur . . . . . .WHOEVER that may be!


This Saturday night past saw four of us convene at the 'Shed of Lead' at 'Rom on the ford', with 750 point armies for the start of Neils WHF campaign.

What follows is a series of photos and a few comments as the four way battle (with Neil acting a 5th column) was pure chaos.


In the end I managed to get my General off the back table edge (which was the objective of the battle) and I suffered no permanent casualties. Result!

My main adversary, Phil got his General off the Field (mostly) intact but I had pretty much decimated his forces (I have an unreasonable hatred against unpainted miniatures. I can't help it!).

I am pretty sure Lano and Tookey lost their Generals to the Dryads and smashed each other to pieces on the opposite flank. I have no idea what their permanent casualties were.

This is how Neil wrote up the battle.

Sorry about the grey in white text. It is something to do with copying the text from the email he sent me.

There is a lot there but it's good stuff.