So it turns out games this summer are like buses. . . . . . You wait ages for one and then three come along at once!!

Sunday I get a call from my Brother wondering if a game was a possibility. 10pm he rocks up and finds the board set out thus...... 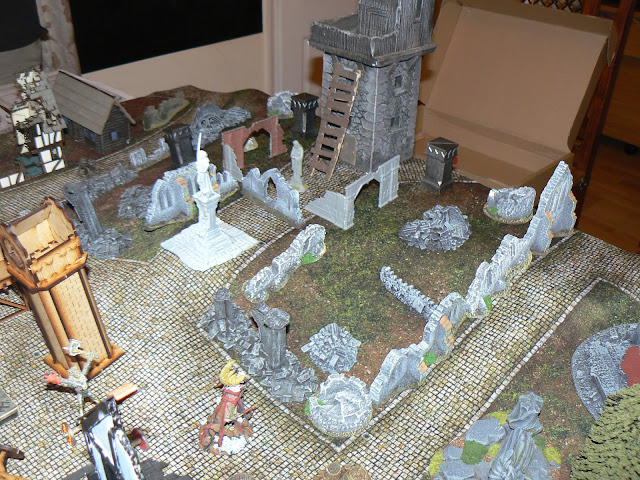 This will be a battle for the library section of the map. The set up above is supposed to represent the ruined library and the surrounding houses.

Both of us had made the effort to rewrite your warband roster sheets in order to re-orientate ourselves with our warbands. This proved to be a worthwhile task as both Kris and I rediscovered all sorts of abilities, skills and character upgrades we had forgotten about.

This would lead us to have an absolute epic, see-saw, knifed edge battle. Probably the best game of Mordheim I have ever played and that is saying something!!!

Turn one and my melee monsters rush forward to the cover of a storehouse. 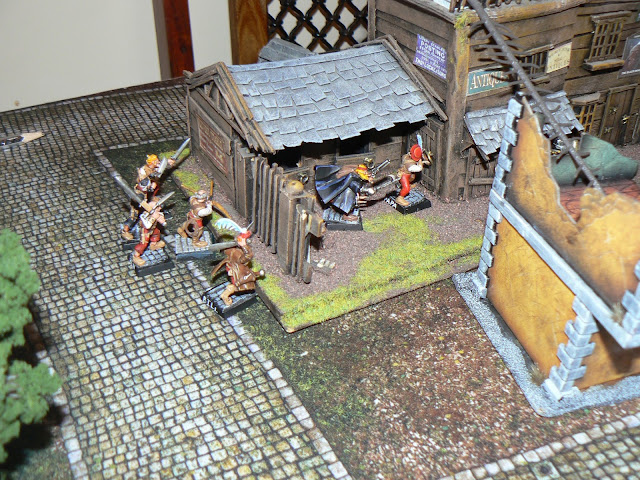 A number of my marksmen move forward to cover the centre of the board. 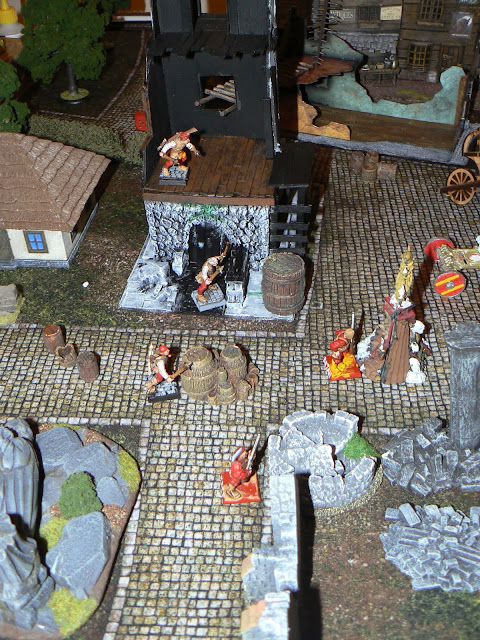 On the opposite side of the board Kris splits his warband into three kill teams and moves forward aggressively. I wonder if my Marksmen will have the volume of fire to drop all these attackers? 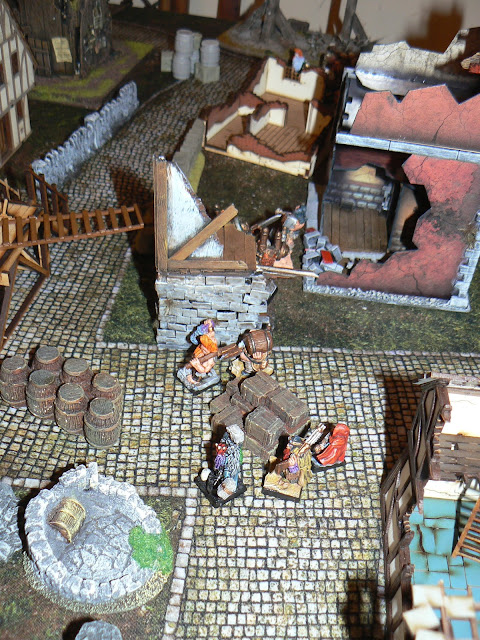 On Kris' right flank he sends forward a small force to contest the store house. 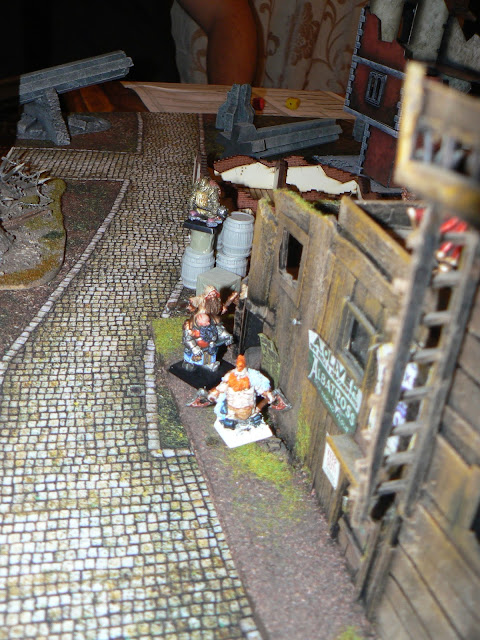 I use the Reiklanders speed to occupy the ground floor while 'Papa' takes to the roof to open a field of fire. 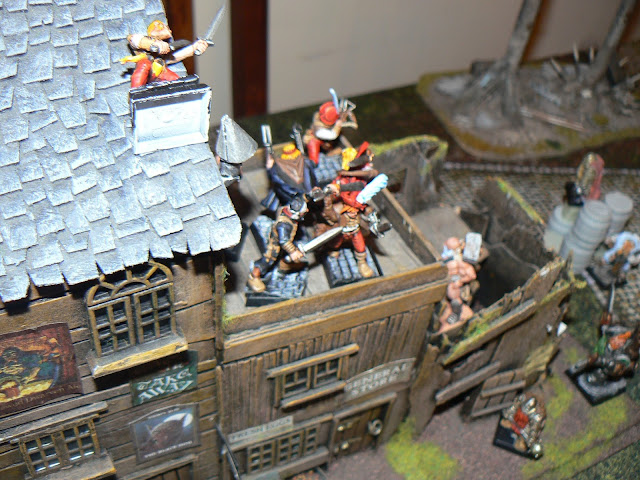 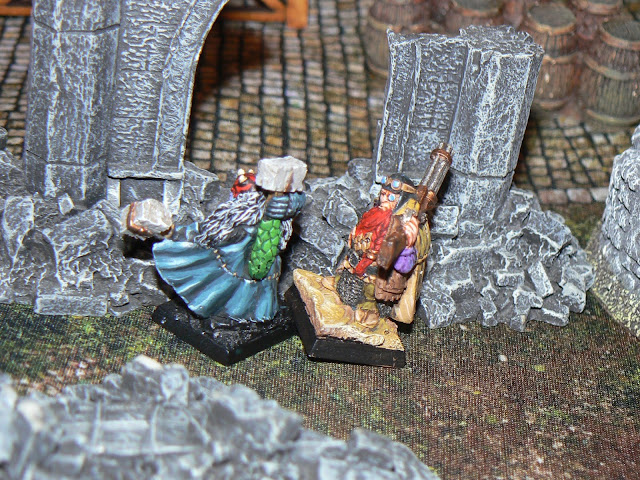 In a surprise move Kris rushes his central forces into the ruined end of the store house. It now looks like we are having a town meeting but Kris has managed to kettle the majority of my Warband and left my Marksmen dangerously exposed! 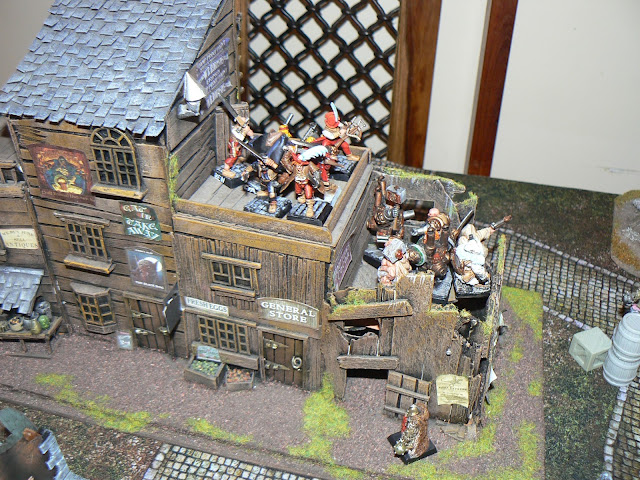 Kris moves his toughness FIVE Slayer up to cover the door of the General store and I decide to make my break. A cannoncade of pistol fire though the open door gives me enough of a window to break out of the building!

Ben manages to catch the knocked down Slayer and only needs to roll a 3+ on two die to take the Slayer out of action . . . . . Yep rolls a one and a two!! 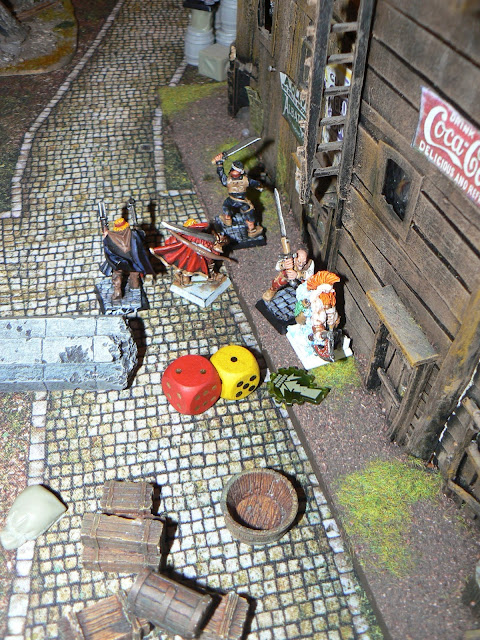 I then move this breakout force forward and have them blast away into the barn with their pistols. This forces Kris' hand and the Dwarves surge out to grapple with my flanking force. 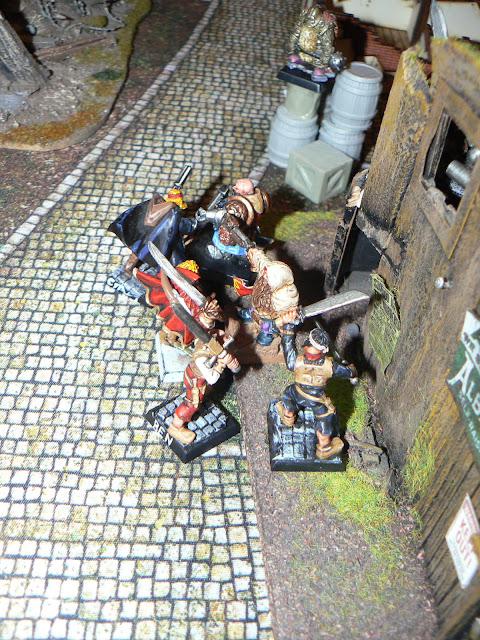 In the centre Bill and Guapo Joe get to grips with Kris' Pit fighter. A protracted brawl ensues! 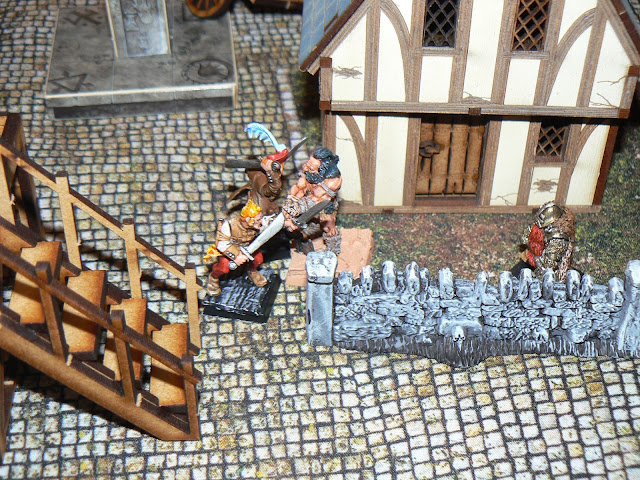 By the ruined barn the melee continues. Due to the position of the Reiklanders neither the Dwarf Noble or Engineer (who are both nails!) are unable to enter the conflict and break the stale mate! 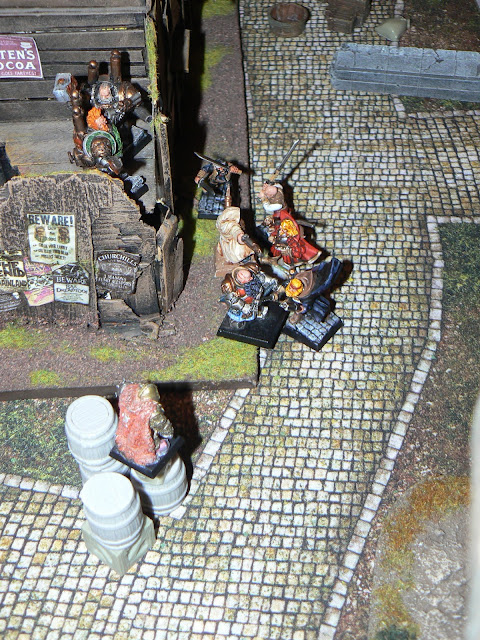 With a lack of viable targets due to the rise in casualties and melees breaking out across the battlefield 'Spook' and the rest of the Marksmen charge up my right flank. A lucky series of high rolls sees them clear the Dwarf flanking force facing them.

In the centre the knife work continues. Despite the number of hits neither side manages to break the deadlock! The Dwarf Engineer runs out of the barn in an attempt to tip the balance 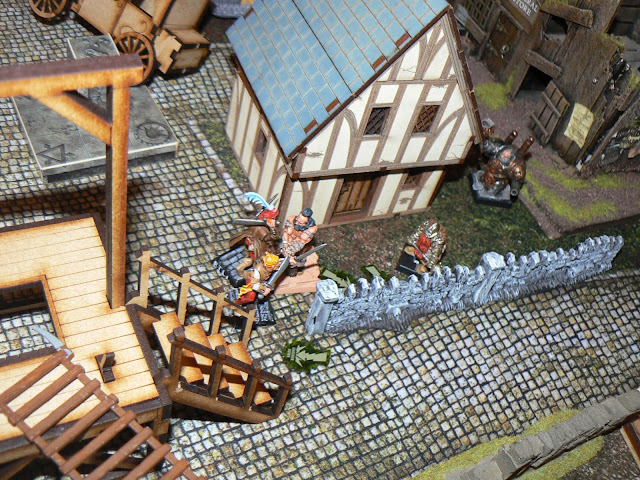 The pulling down of a Dwarf henchman outside the barn allows the Dwarf Noble to finally get to grips with Crashart. These two leaders have waited FOURTEEN games to get to grips with each other. The battle is suitably cinematic!!!! 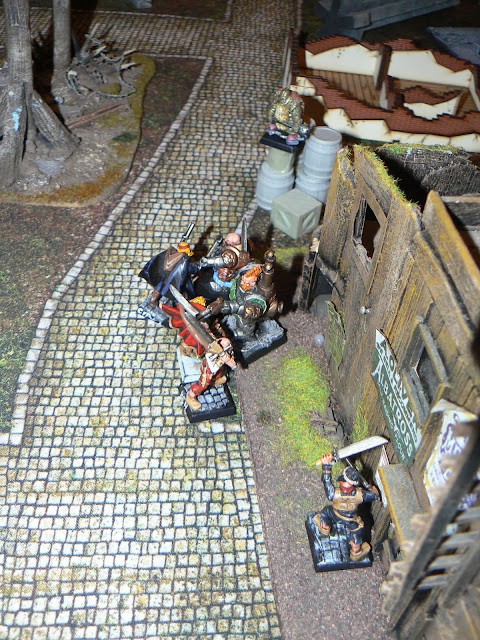 Kris' other Pit fighter had managed to quietly scale the outside of the store house and had been patiently sneaking his way towards Archie on the balcony. Kris has had his eye set on this fella since early in the campaign!!

Sitting on balistic skill six he would be a real scalp to claim this late in the campaign!

Kris deems the time to strike is now and the Pitfighter surges through the building to trap Archie on the balcony with no escape!

Archie is tossed over the balcony and falls foul of the drop. Will he survive the post game injury roll????? 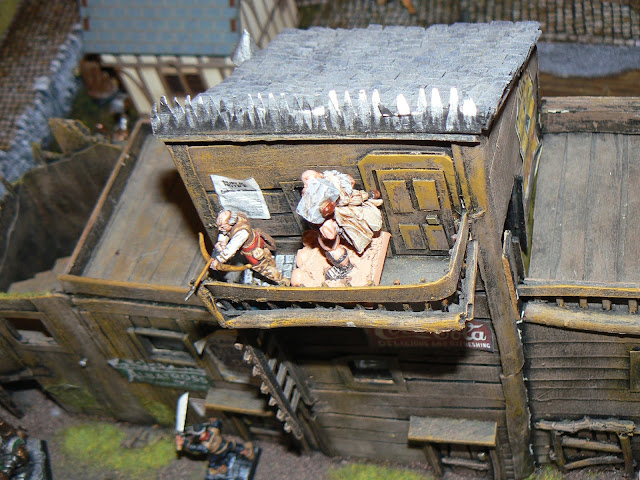 My warband pass their moral check due to the surge in casualties but I have a hard decision to make. I still have the majority of my heros active and in fairly good positons. How willing am I to scarifice them in order to take the multi wounds Noble and Engineer out of the game?

At least one of my heros is on the verge of being curb stomped.

How willing am I to risk a pyrrhic victory this late into the campaign? 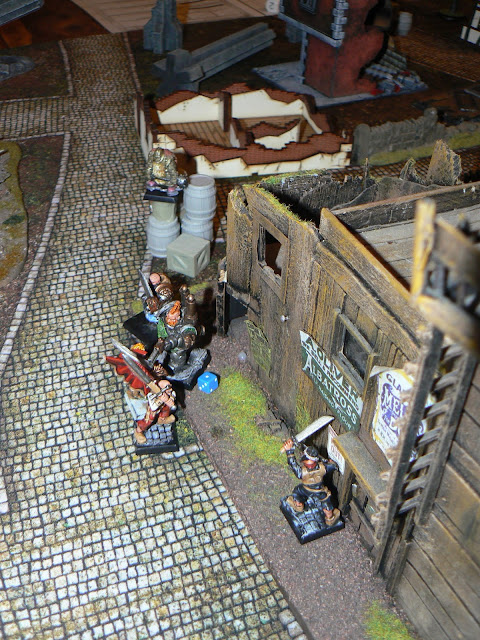 With a heavy heart I sound the retreat and leave the library in the hands of the victorious Dwarves!!

Kris loses three of his most decorated henchmen in the post game injury rolls. Despite the victory and the wealth of coin could this cost Kris in the remaining games? 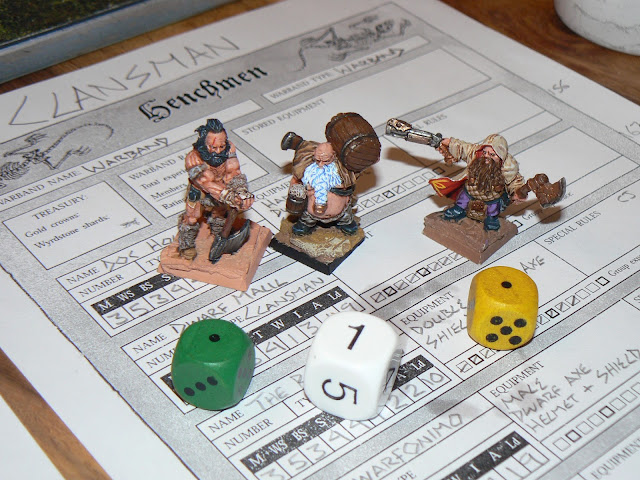 Archie managed to make a full recovery in the post game rolls! 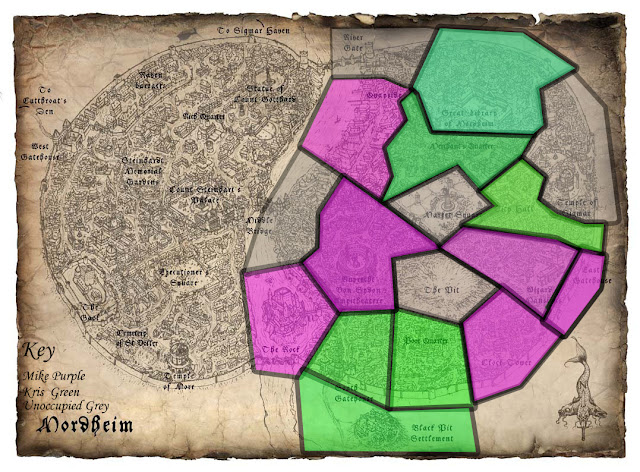