Today I got a text from my brother. Despite being the bank holiday he had just had a maths test (fingers crossed) and needed to escape into miniatures for an hour or so. Despite only having a couple of days before going back to work I am easily distracted (again) and it's another Bank Holiday El Smashico game of Bloodbowl.

No fancy commentry on this one as I really need to get back to work!

Kris is eager to give his new team a run out so it's a new classico of The Orc Team Vs the Bifrost Berserkers.

Despite the Viking look we continue to play them as 2nd Edition Humans. 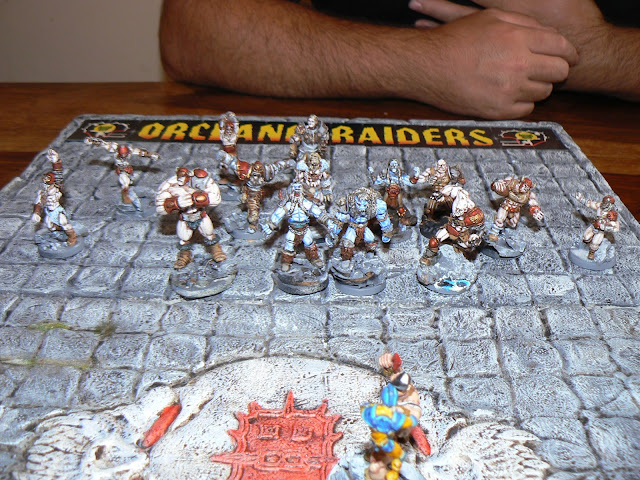 The shernanigans start early and Kris tries to field 14 players on the field. I know Orcs are poor counters but even I work out something is wrong with this picture! 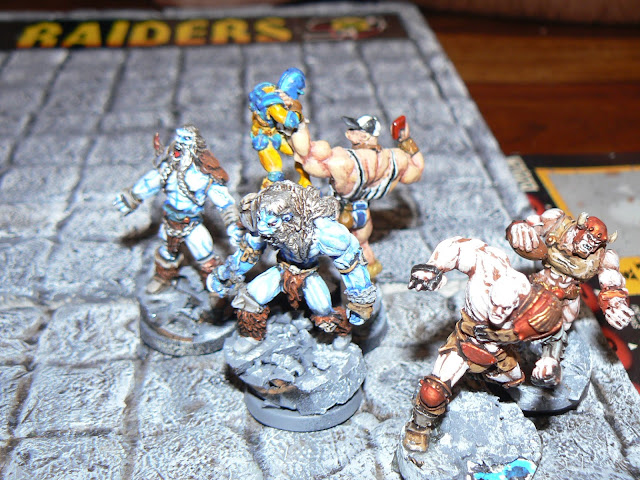 Early on the Ref (kindly donated by Russel) takes an interest in the Norse. Keep a close eye on 'em ref! 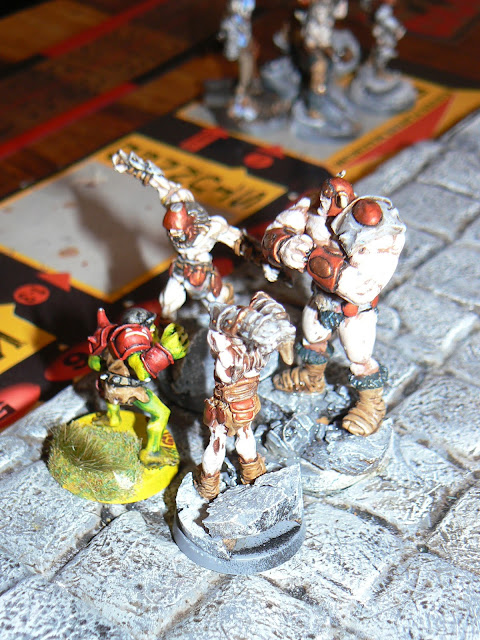 Swift Nick, my Orc Catcher looks like he's about to come unstuck on the left wing as he runs into a three man block! 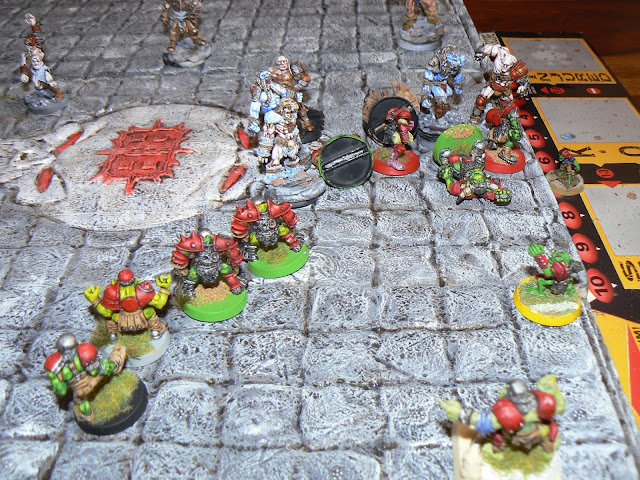 Thankfully the slippery sod manages to evade the multiple block and decides to join us on the right.
Over on the right wing I continue to make steady progress. 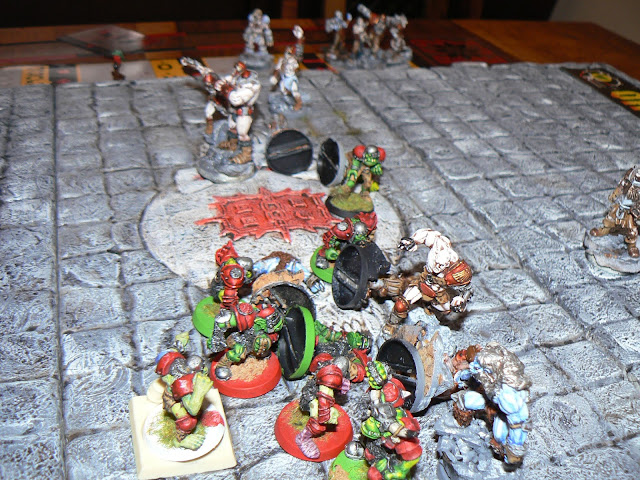 In typical 2nd edition style things get messy in the centre and my blockers 'da loose toofs' get to work! 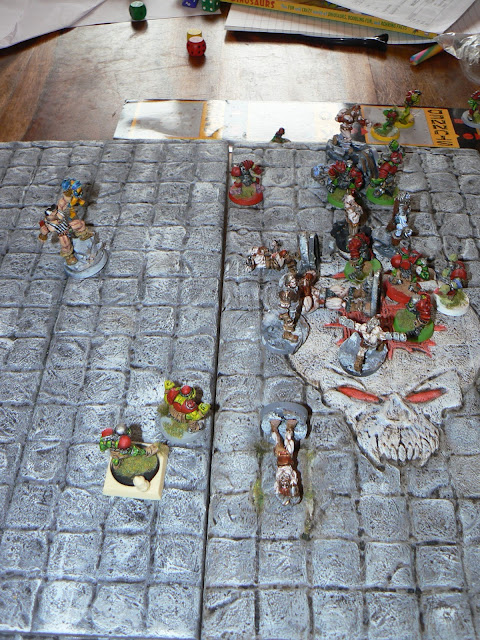 I spot an opening on the left wing and a swift chuck over the top is caught by 'Boots' my kicker. Could this be a touch down? 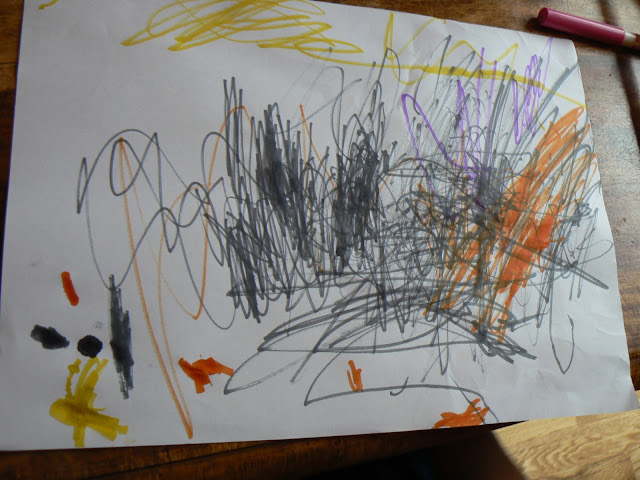 A quick interlude as Munchkin (my daughter) shows us her drawing of the game in action! I hope it shows me winning.

Now back to the action. 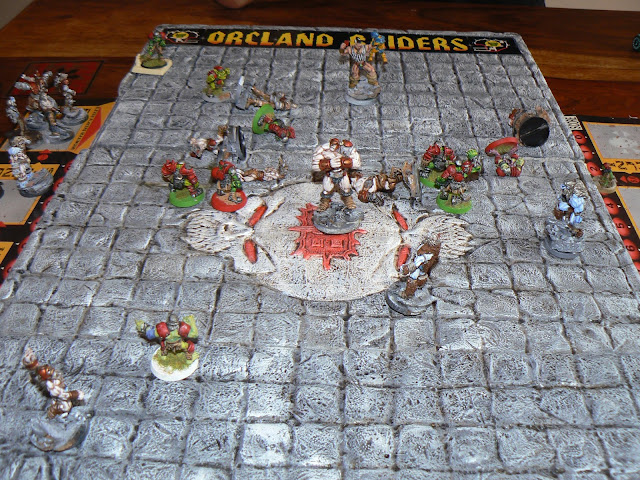 I make a bolt down the left wing and a run of well timed blocks coupled with some very lucky dice rolls sees 'Boots' continue his run towards the end zone unhindered. 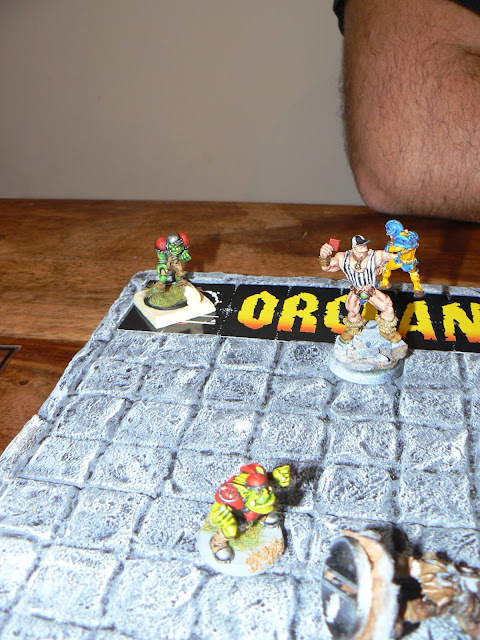 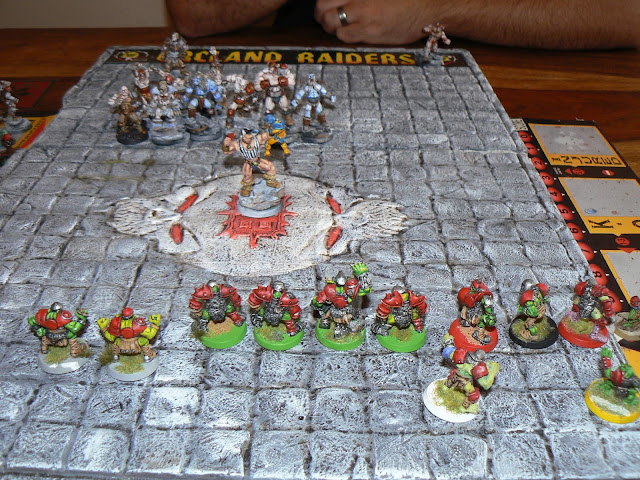 The second half sees me punt the ball as far down the field as possible. 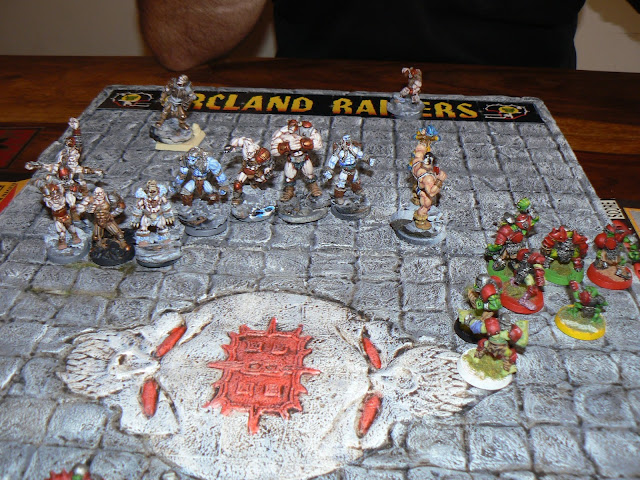 Kris make a concentrated break down his right wing.

I decide to give him enough rope to hang himself and pull back on my left to crunch any one who makes a break for it while the majority of my team try to swing in round the back and nick the ball. 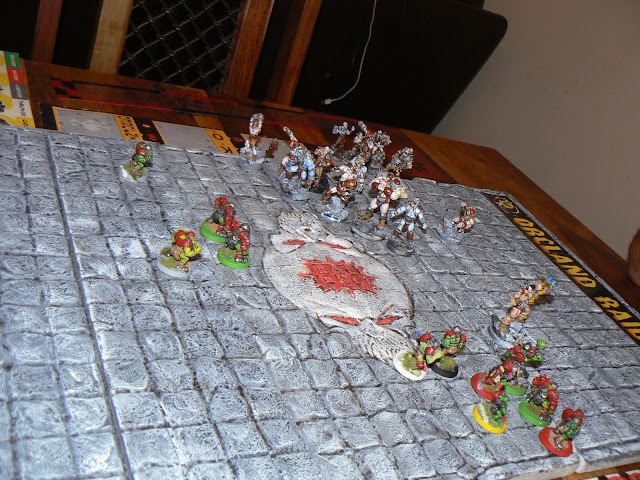 I look at the above picture and think 'Custers last stand'? 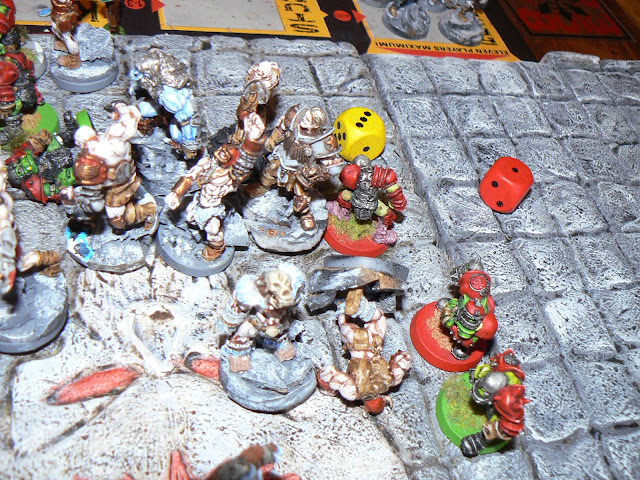 My Blitzer 'Da green streak' steams in and tries to make a 'Heroic tackle' but I fail the roll miserably and the Norse Thrower, twinkle toes his way through the tackle. 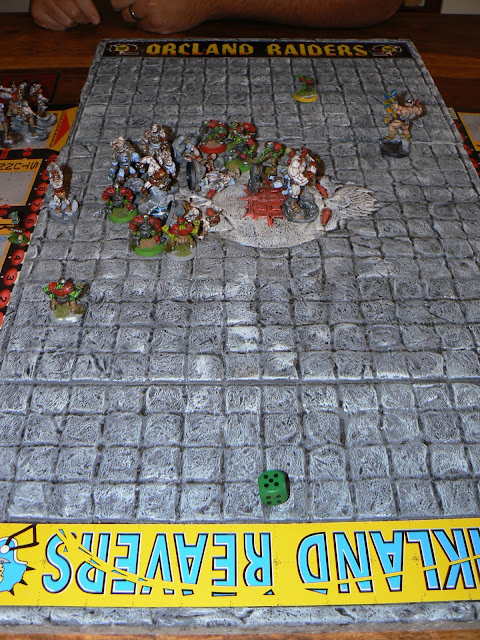 Thankfully everything else is going ok. I tighten the noose and stall out the Norse attack, while getting enough Orks round the back to cause Kris some discomfort (oo er misses!). 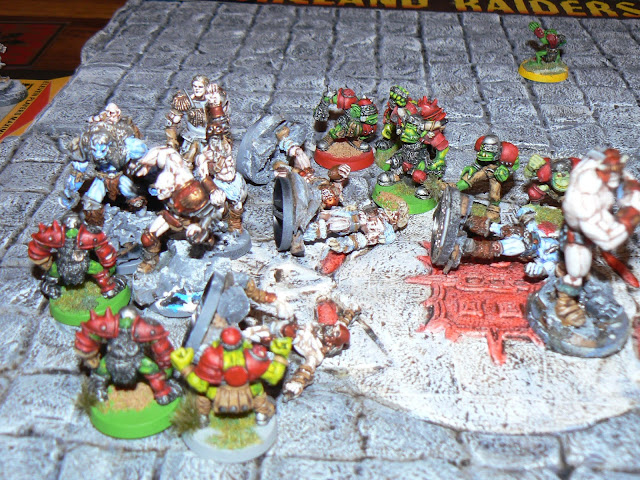 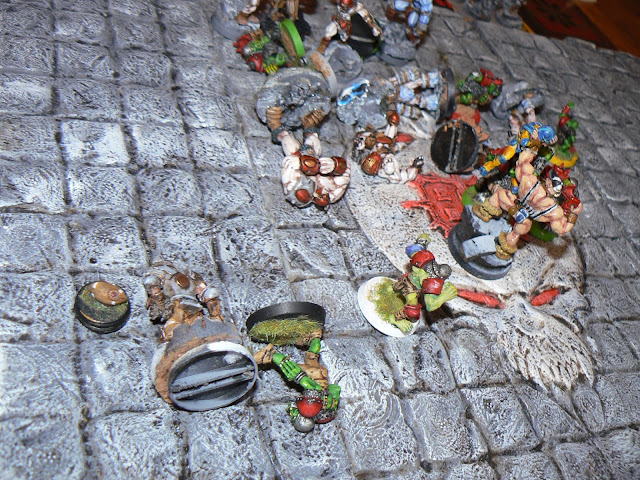 Kris lobs one over the top but 'Boots' makes the Heroic tackle and the ball bobbles free. Could a reversal be on the cards? 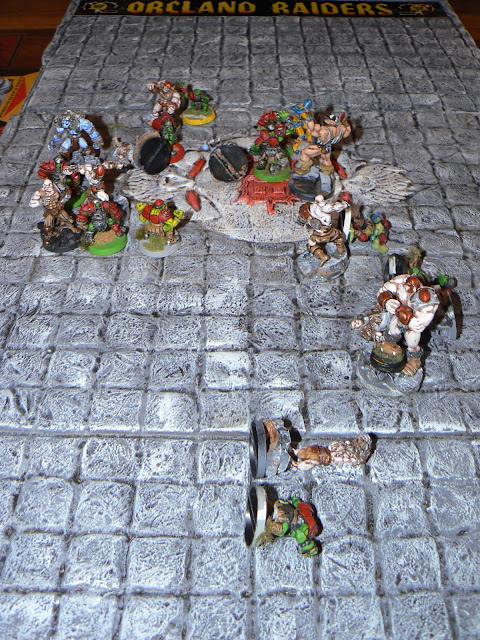 NO! The Norse Blocker manages to scoop up the ball and in looks fairly secure in his giant mitts!


On my left, Nigel my Orc blocker wishes he had listerned to his mother and gone into dentistry! 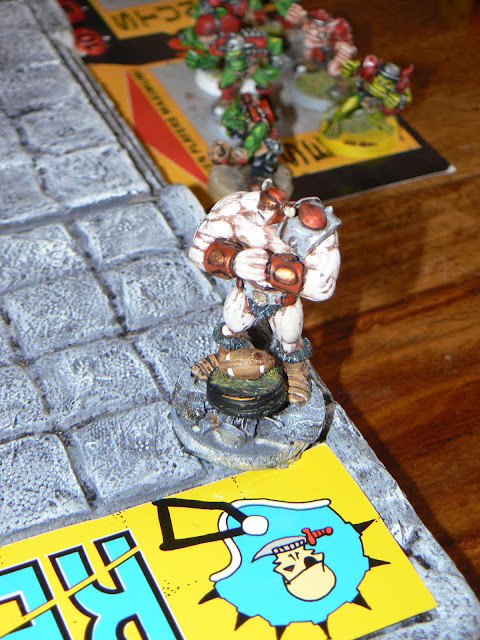 The Norse blocker continues his 'sprint' towards the Orc endzone but runs out of puff just short of the line! 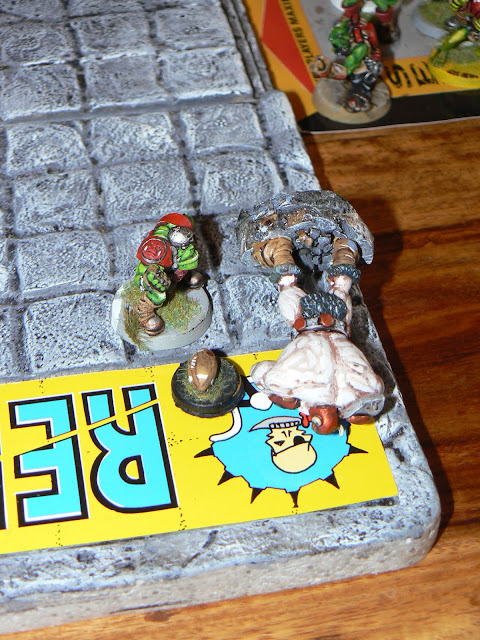 One of my 'Expendables' comes crashing in and drops the Norse with a heroic tackle. Unfortunately it does result in the Orc staying in the injury box for the rest of the game! 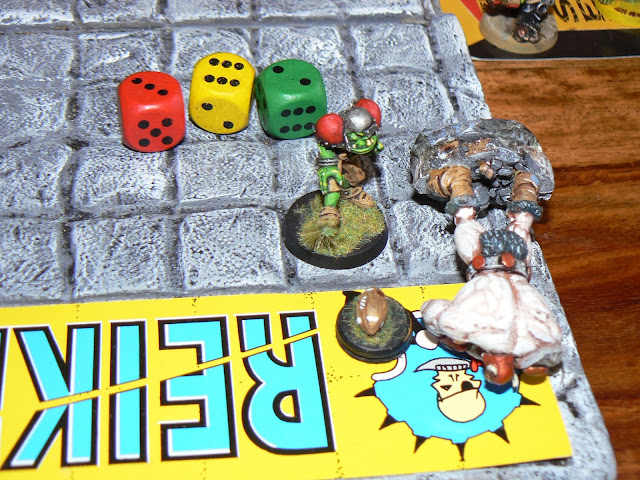 Now all 'Boots' has to do is sprint in, grab the ball and then punt it up field. . . Easy right?

Of course not! I roll a six on the sprint and Boots ends up in the injury box with 'Charleys horses'.

Kris tries to run down 'Sticky Hands Dan' my Goblin catcher just in case I do get my hands on the ball. Unfortunately his Blitzer decides to collapse to the ground and drops dead from a coronary!

Maybe more cardio was needed in the pre-season training? 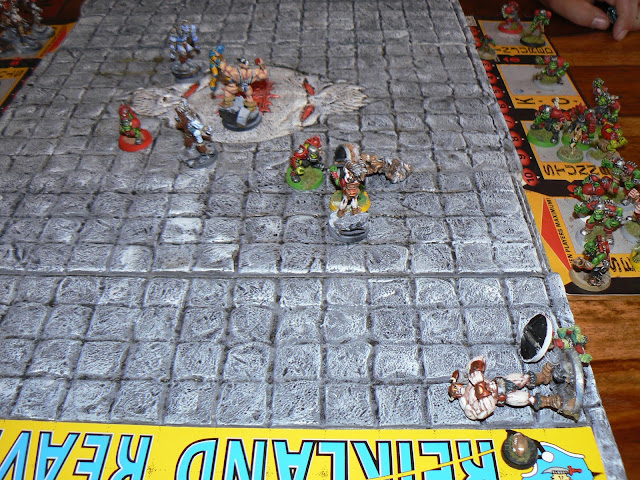 With only 2 turns left of the game, the Blocker is back on his feet but my Thrower 'Da long bomb' comes crashing in and manages to drop the bigger man with another heroic tackle!

How bloody close is this! 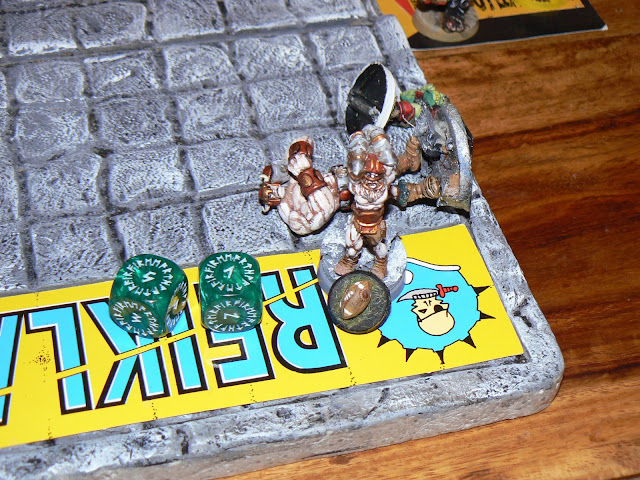 With only one turn left and a total of eight players on the pitch, we are both running out of options. Out of nowhere Kris' lineman manages to sprint into the endzone and pick up the ball to score and end the game on a one all draw in the dieing seconds of the game!

Bless him he's had a long day and I nearly got away with it.

Alls fair in love and Bloodbowl! 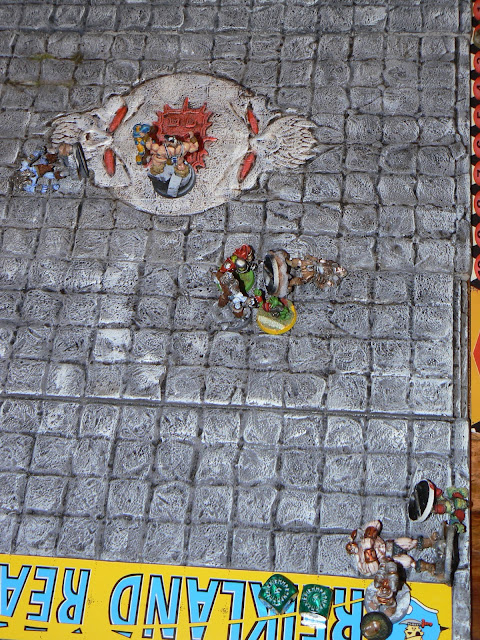 And thats the final whistle!

The shot from the blimp shows how few players are left on the field of play. Jonathan E would be proud! 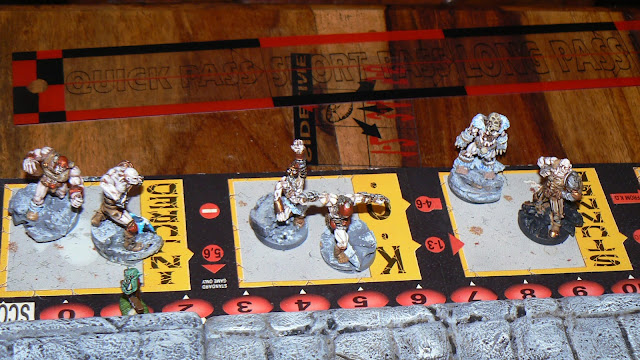 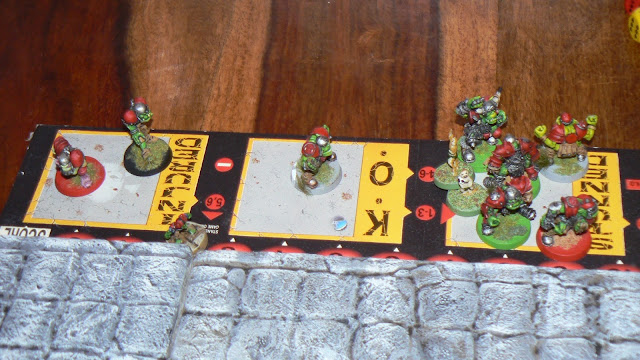 What a nail biter!

Who knows what the result would have been if my brother had not insisted in striving on with the unluckiest themed die in the world!

Is there a set of themed dice out there which are not unlucky?