In order to have a break from Shadespire we decided to have a short 'Path to Glory' Campaign I had devised with a mash up of several rule sets (mostly 8th Edition WHF) and random post game rolls. 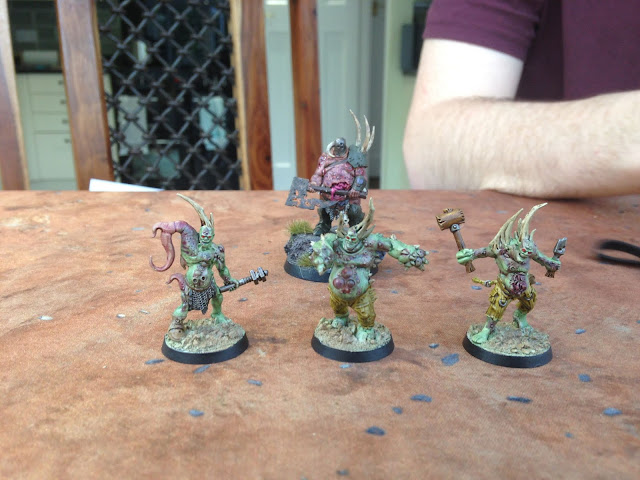 Shaggy went with Nurgle, Lee with Slannesh and I went with Khorne.

Shaggy turned up early so he and I threw down to see how the game would play. . . . . . Turned out brutally!!

Hopefully quantity would prevail over quality! 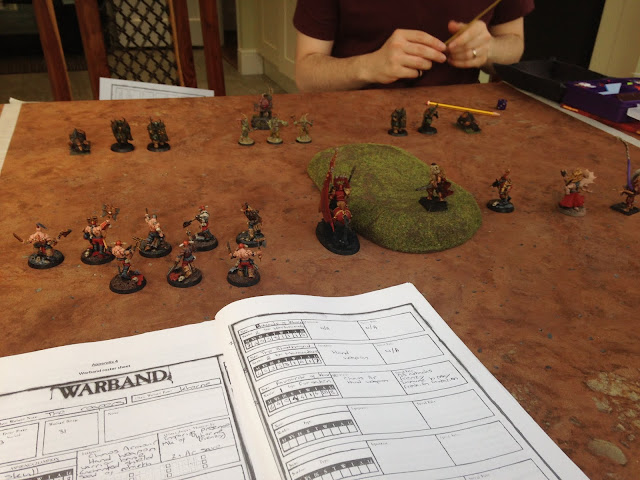 Basically I went the full Khorne and charged with everything as soon as I got the chance. . . . . .

This sees my Leader 'Skull' take out two Forsaken, 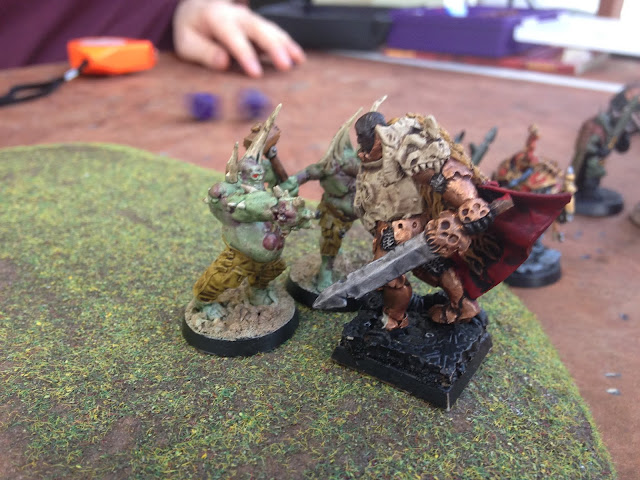 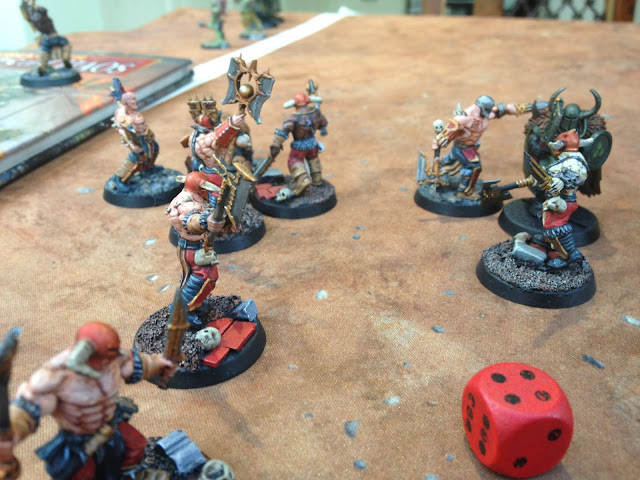 and my Hounds hunt down the Nurgle angry badger! 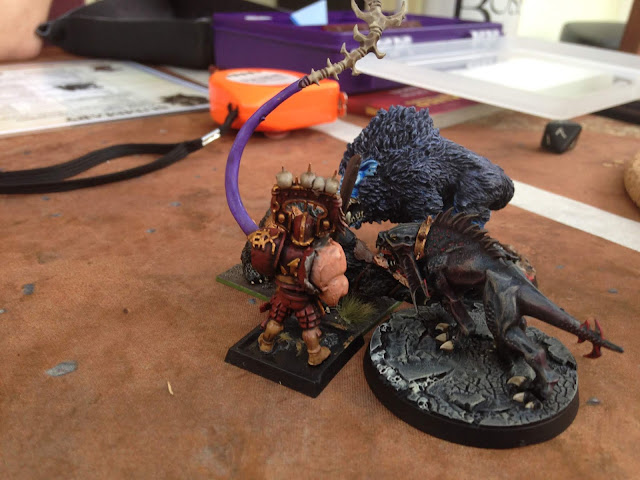 This leaves a charge lane open which I rip through to hunt down the Nurgle aspiring Champion! 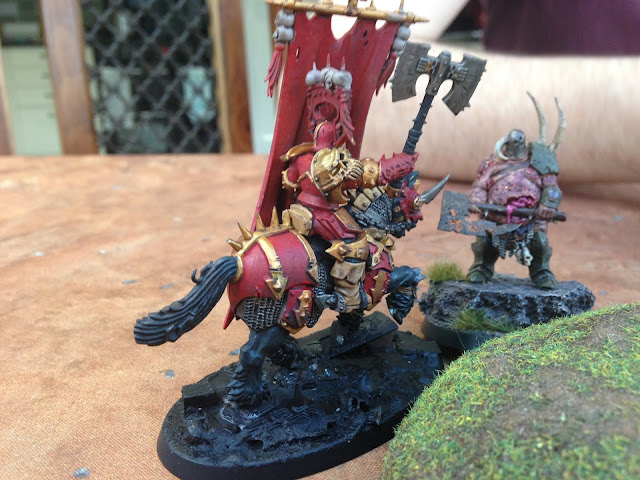 So game one was a quick and brutal affair which I have to be honest is what I wanted. I know from games like Mordheim etc the first game are always quick but grow in complexity as the warbands develop.

Game two was a three way game (Lee had turned up with his (proxy) Slaanesh.

The game is eight turns and you clock up the infamy through the game depending on the quality of the warriors you have on the hill at the end of each players turn.

This was the first real game of the campaign and I developed it to give each warband (potentially) a real kick with regards to infamy to develop their warbands for later games.

Whichever Aspiring Champion is standing on the focal point at the end of the game gets an extra bonus.


Despite the focus of the game being the hill in the middle Lee and I just charge each other! 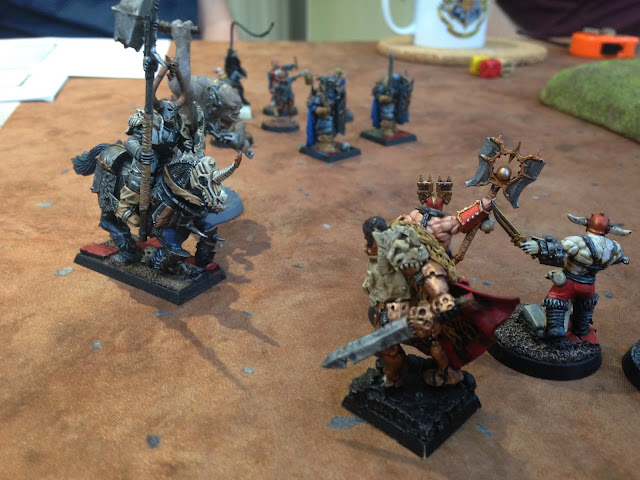 But Lee has given his champion the 'Alure of Slaanesh' mutation (each champion is allowed 20 points of free magical items or mutations at their inception).

This sees half my warband distracted by Lee's nipples and they just stand there drooling! 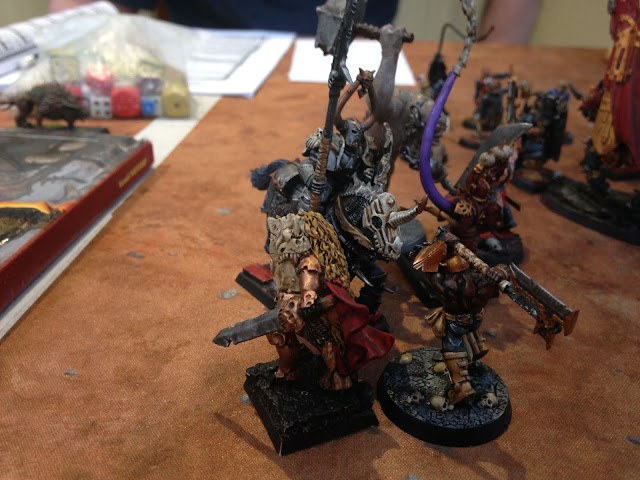 Thankfully the other half of my warband charge for the hill and start racking up infamy. 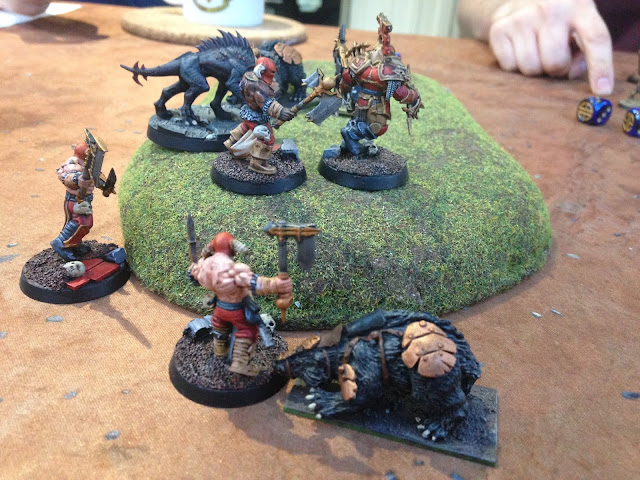 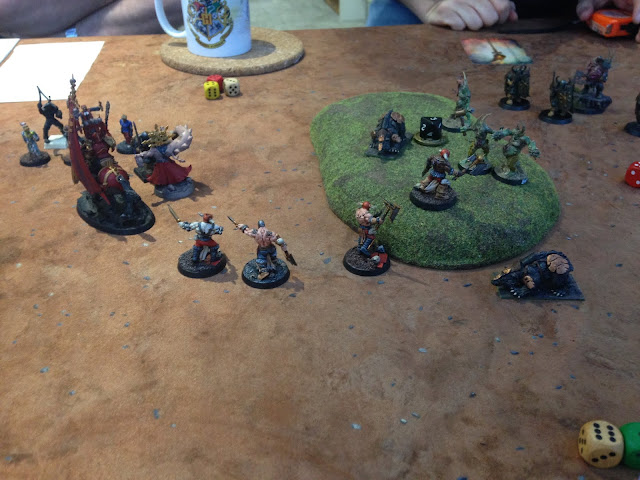 Then Shaggy arrives and massacres anyone I have holding the hill.

This sees Shaggy camp on the hill with both Lee and my warbands too decimated to dislodge him! 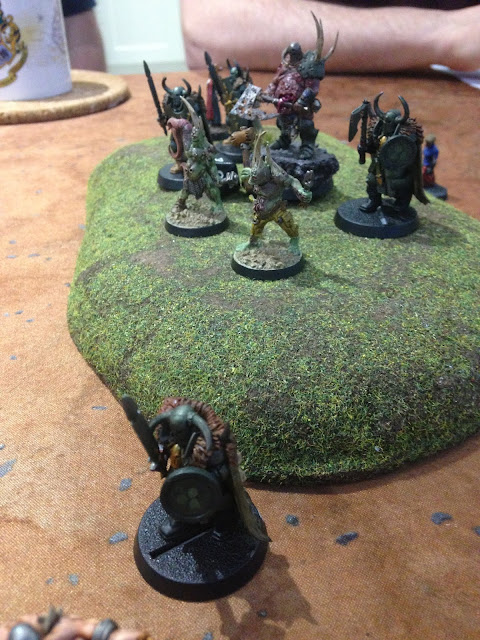 This sees Shaggy walk away the easy winner. 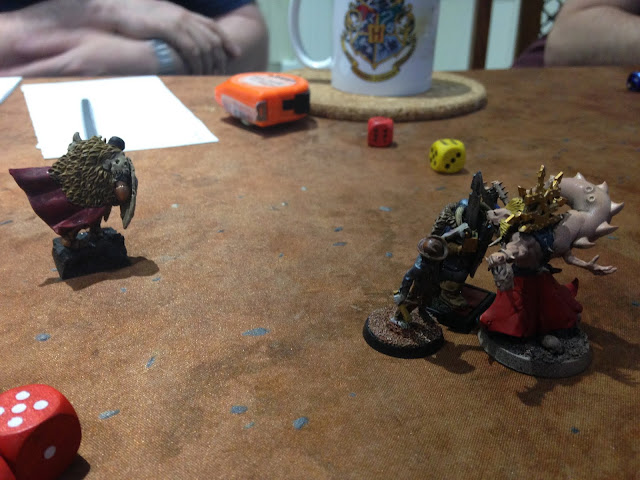 Game three would be another three way game with 5 treasure hoards scattered around the board.

Warbands would gain infamy for holding the treasure chests at the end. 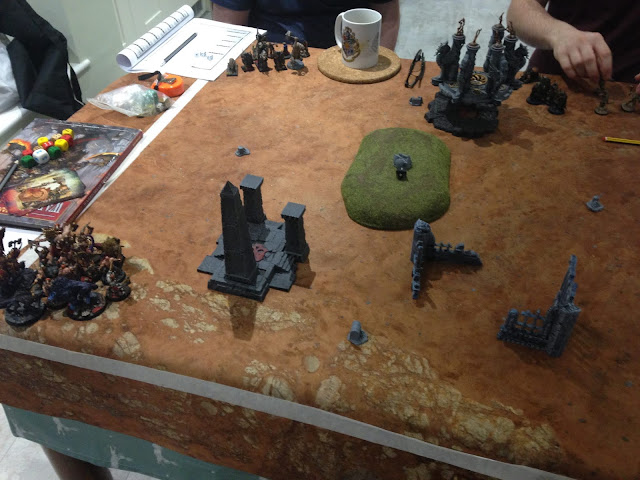 Desperate to regain the favour of Khorne I once again charge Lee and his alluring nipples! 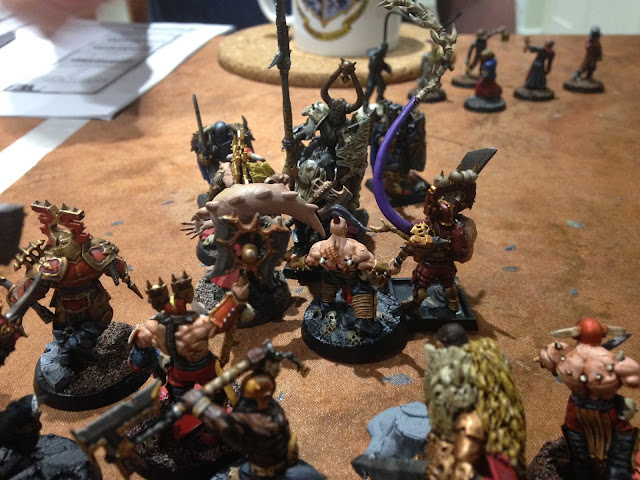 Yep I get distracted by the nipples again! 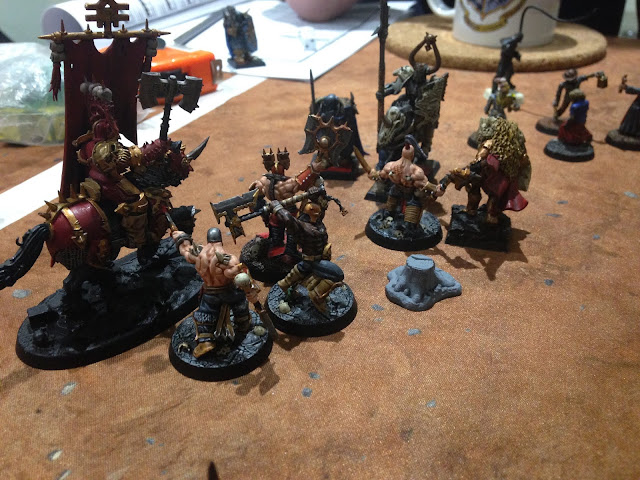 Shaggy and I also contest the central treasure hoard 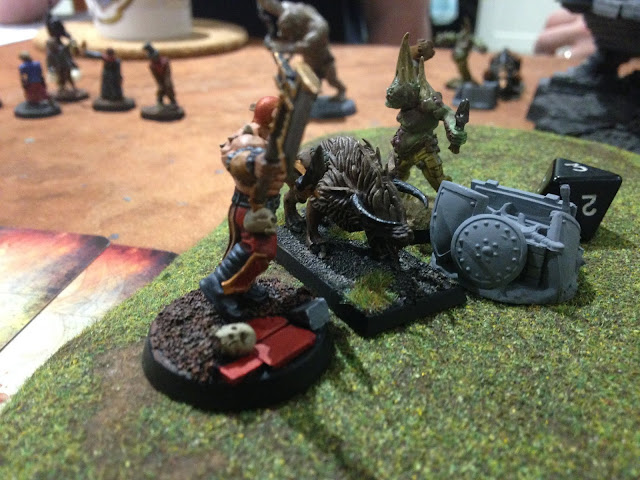 While Shaggy desperately searches his nearest hoard (every figure within 3" not fighting can roll to discover a treasure on a 6). 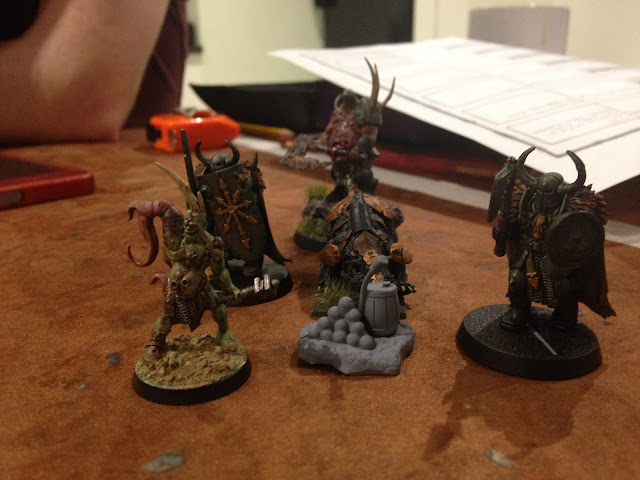 My Aspiring Champion is blindsided by Lee's troll!

Thankfully despite being vomited on 4 times I escape injury (but will need to visit the dry cleaners). 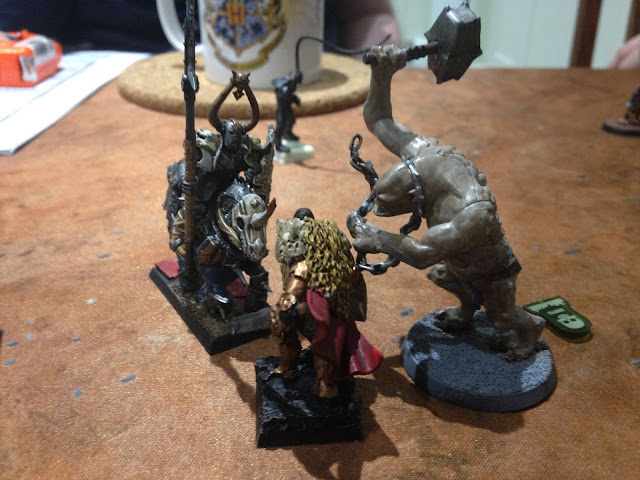 Lee and I continue to hack each others warbands to pieces. 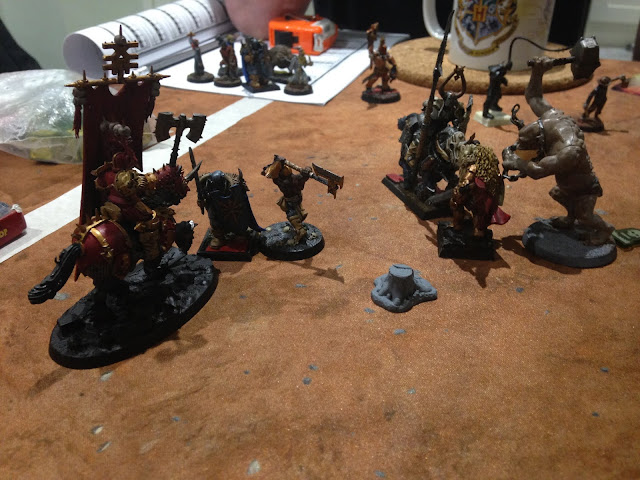 The game once again see Shaggy walk away the easy winner and the post game rolls see's him gain an extra 2 or 3 wounds as well as extra toughness.

I am forced to use any gained 'infamy' to save any killed members as well as stopping my leader being turned into a Spawn!

So all in all a cracking evening of gaming.