Blood bowl, Jervis what have you done?

With the MEGC Blood bowl league kicking off this Friday I figured I had better get some practise in with the 3rd edition rules. Basically I was pulling this face most of the way through..... 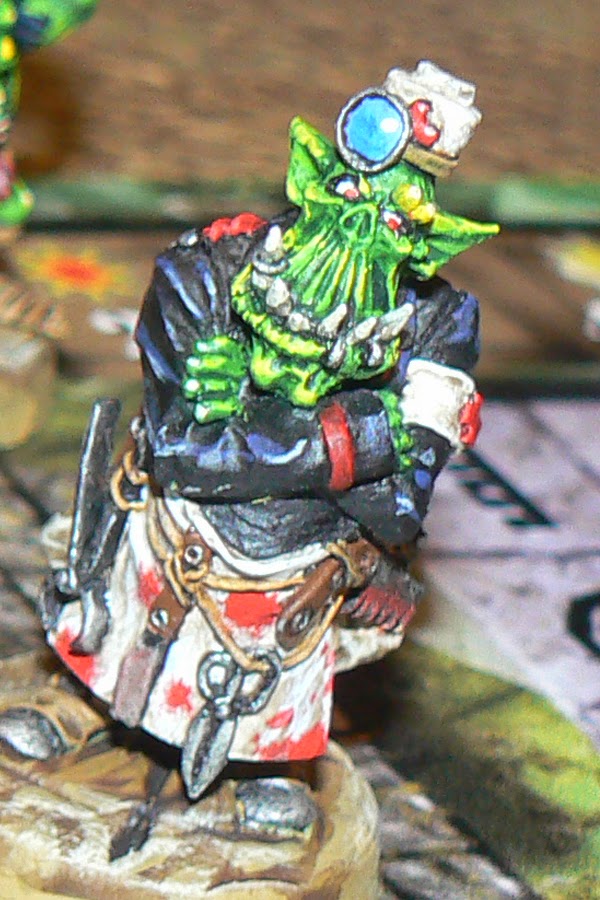 I might be in the minority but I really do not like the 3rd edition version. If this is the version I had to play as a kid I really do not think I would still be playing 20 odd years later!

First off I get my million gold coins and pick my squad plus various other bit and pieces (i will give a full break down next post). Then we toss for kick off and I choose to receive the ball. 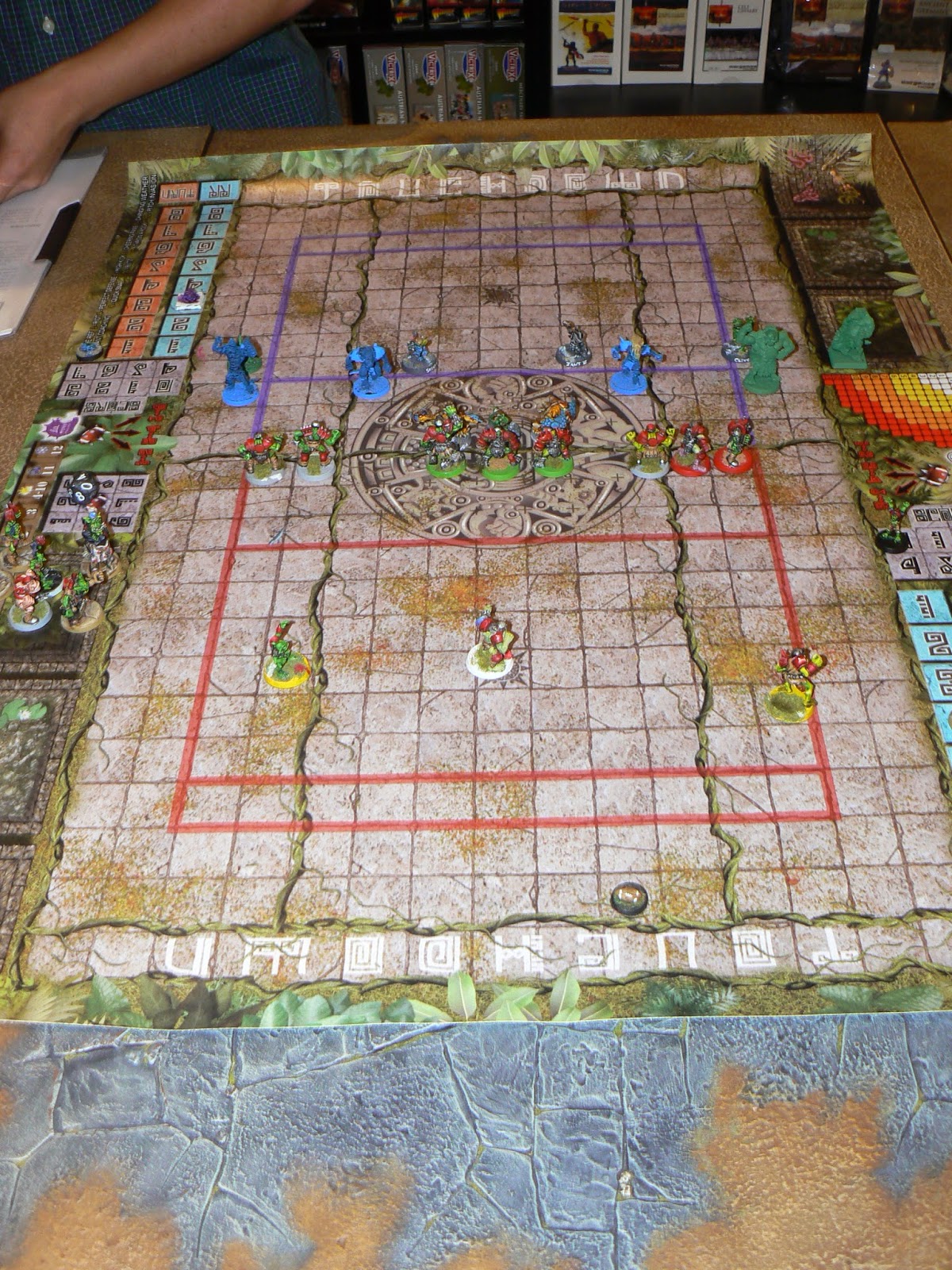 Straight away I feel frustrated by the lack of movement on the pitch as you can only blitz once per turn, other wise you have to start next to the opponent you wish to block. This seems to result in me staring at the board for 10 min before I move 3 players!

A couple of the Orcs get stuck in and floor a Lizard but most of the blocks result in pushing each other about. I played rugby for years before moving on to MMA and I wish I had been this hard to knock over! 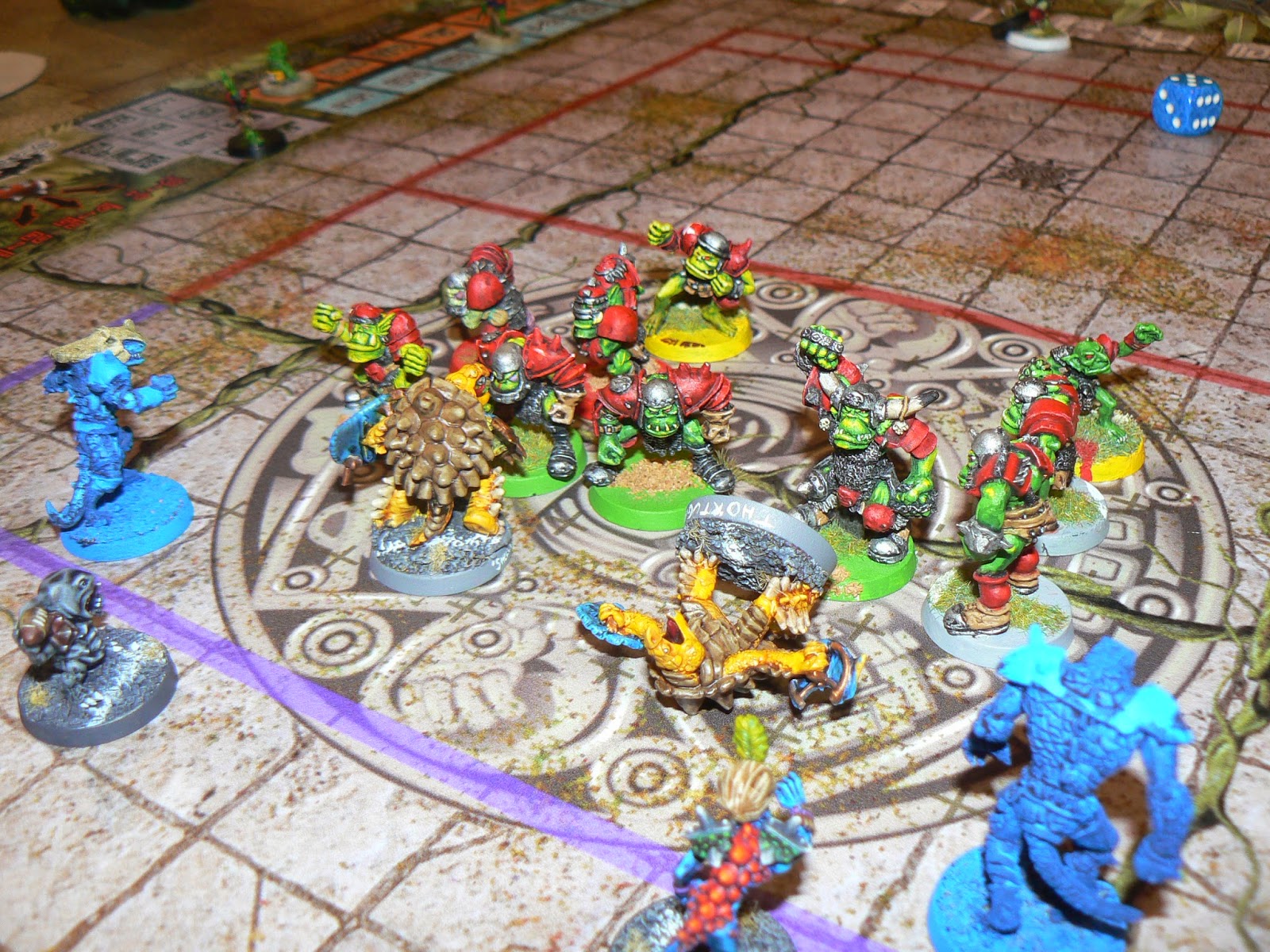 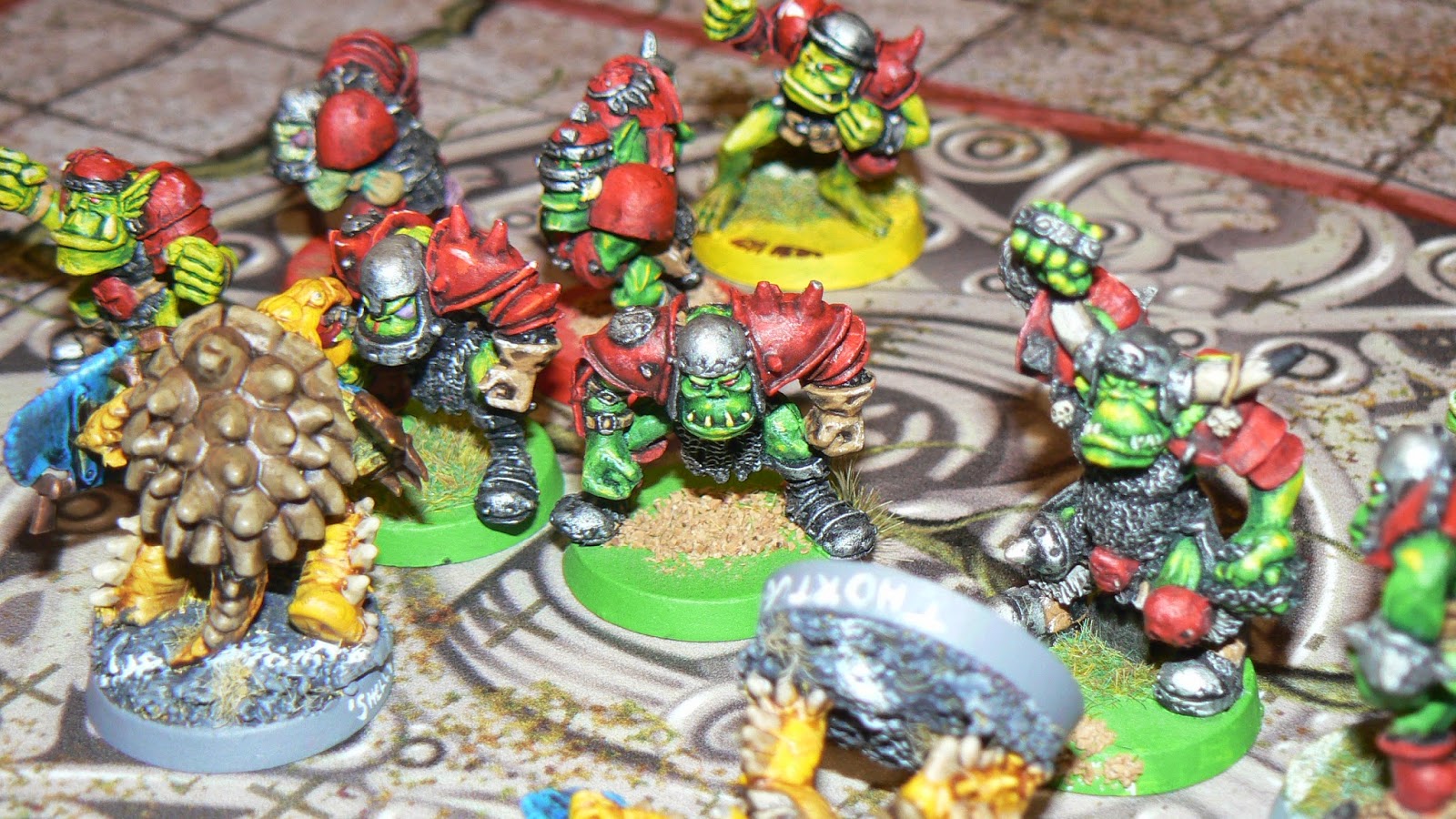 One of my "Green streaks" get stuck in but the result could mean an early finish to my turn, I use a reroll (interesting addition), but the gods of Nuffle have spoken and I roll exactly the same result! 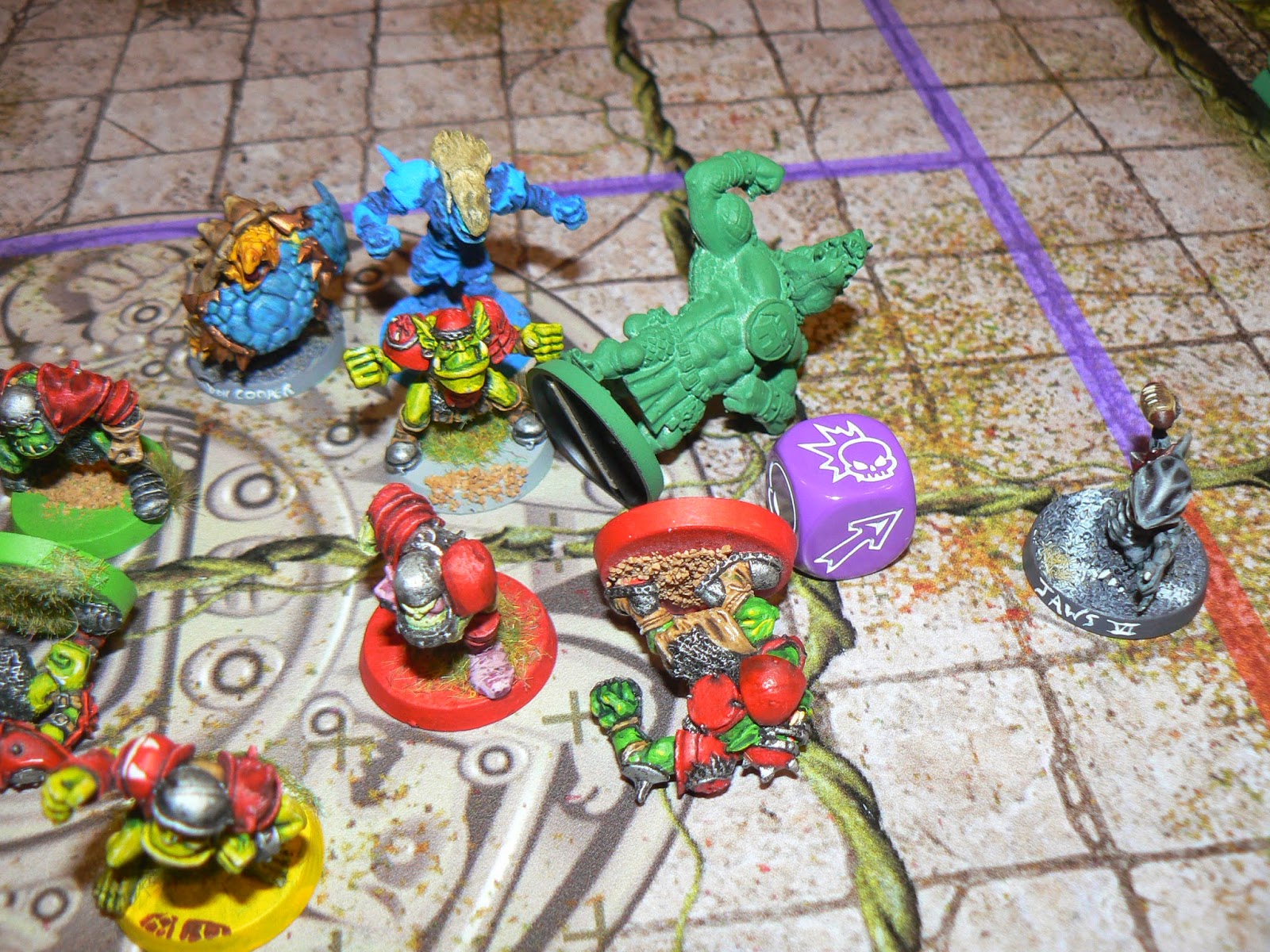 Lano makes a great play for the gaps I have left in my defence and mobs my thrower on my own Touch down line. 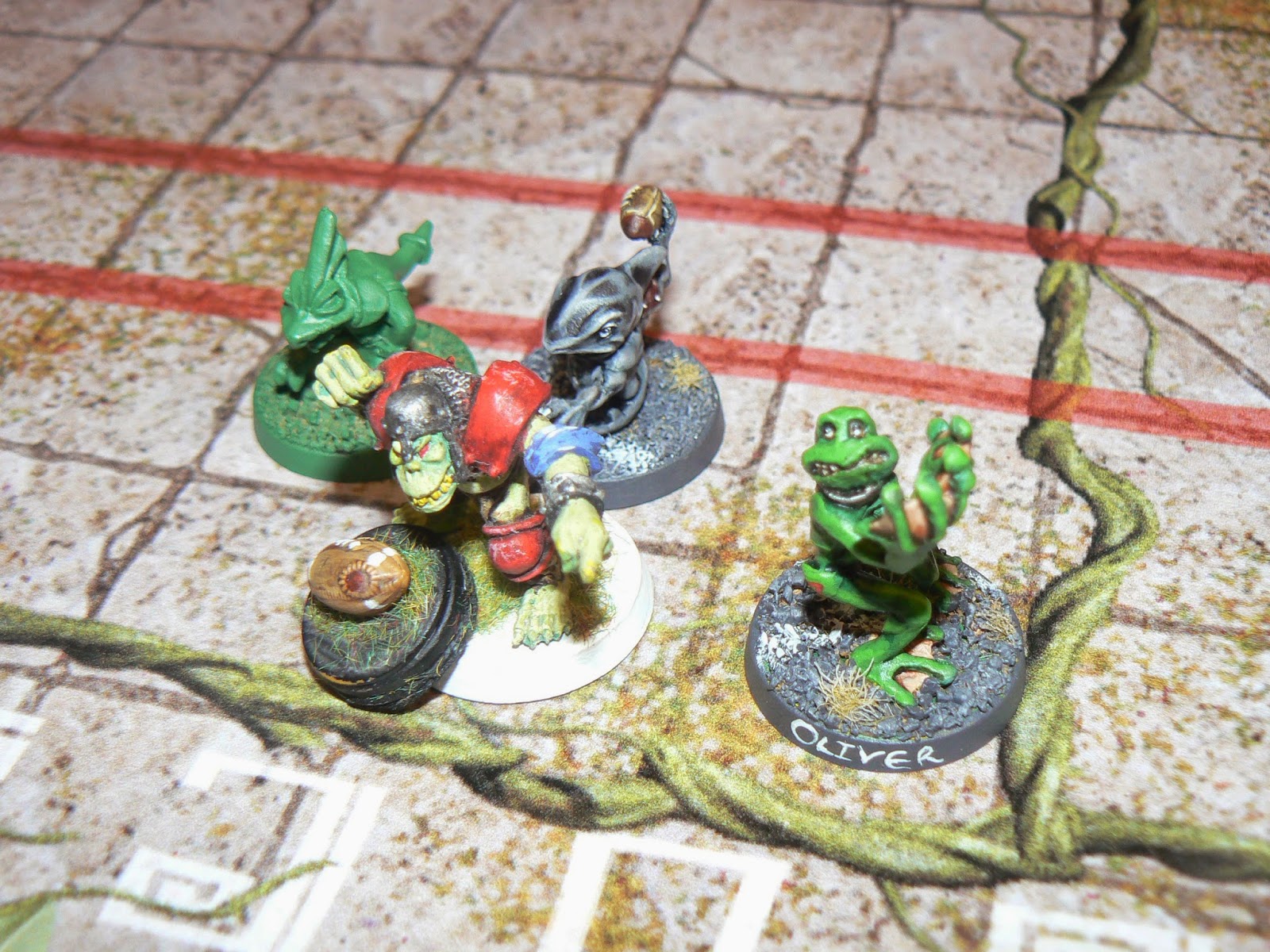 No more multiple blocks BOOOOOOOO! but with the assist system the skinks push the thrower over the TD line and then he falls over and drops the ball which in run in by Skink Ali. 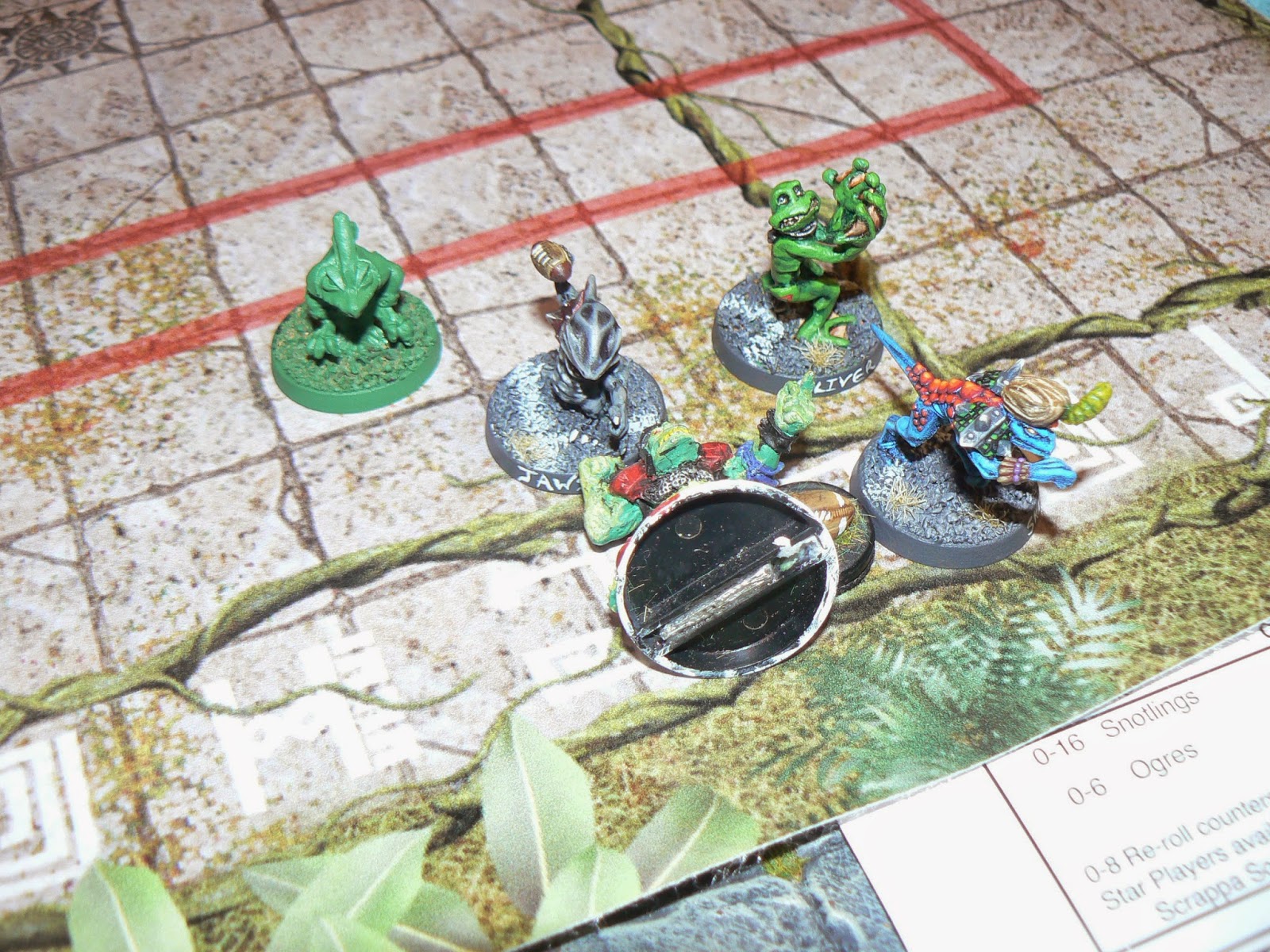 1 - Nil to the lizards and the mood in the Orc camp is rather glum. Restart and another brutal lesson in how the game has changed as I fail my first block despite the reroll and thats turn over. Well done you! 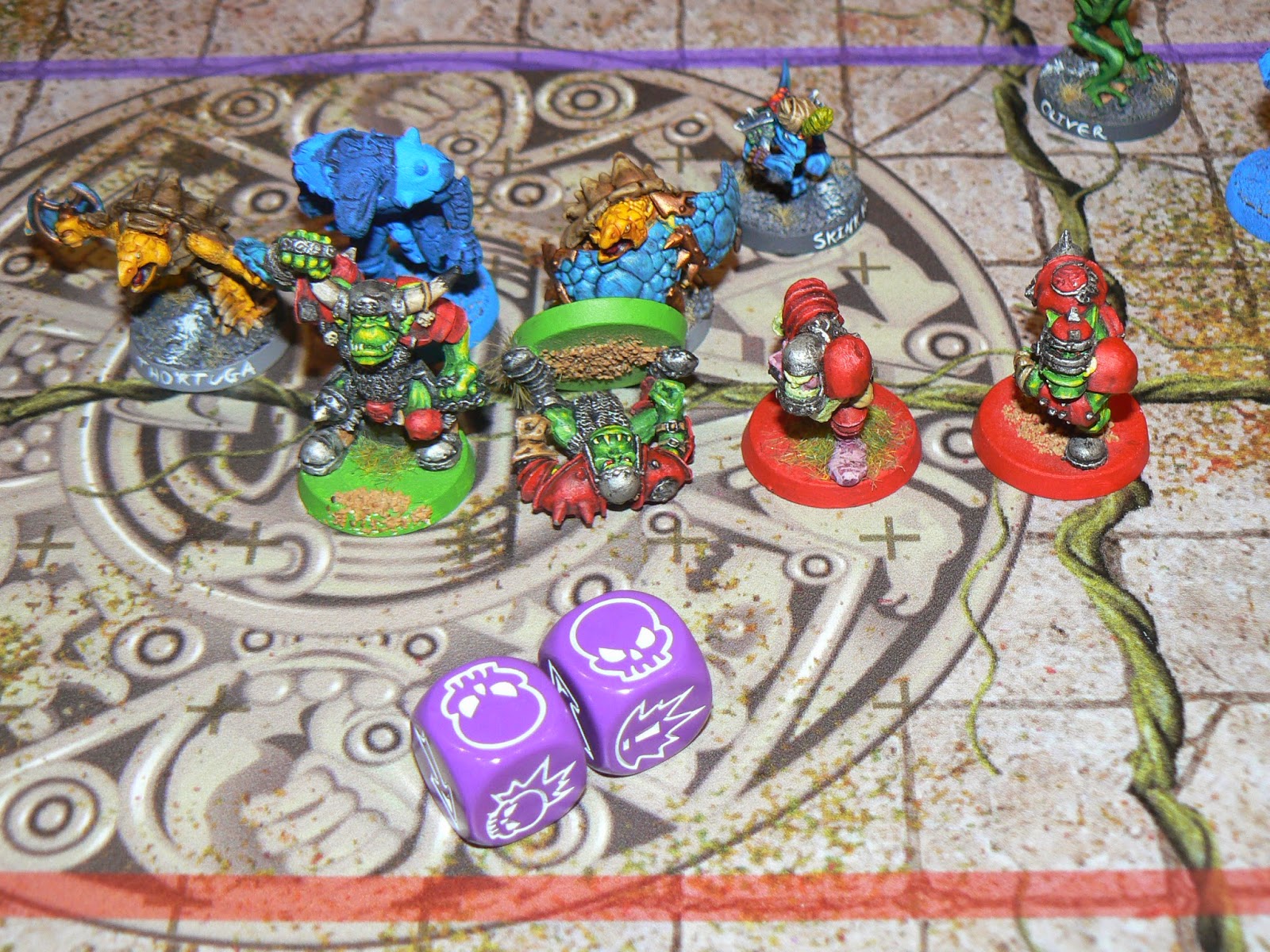 Once again Lano exploits the gaps I have been unable to plug. Guess what my thrower is standing by? 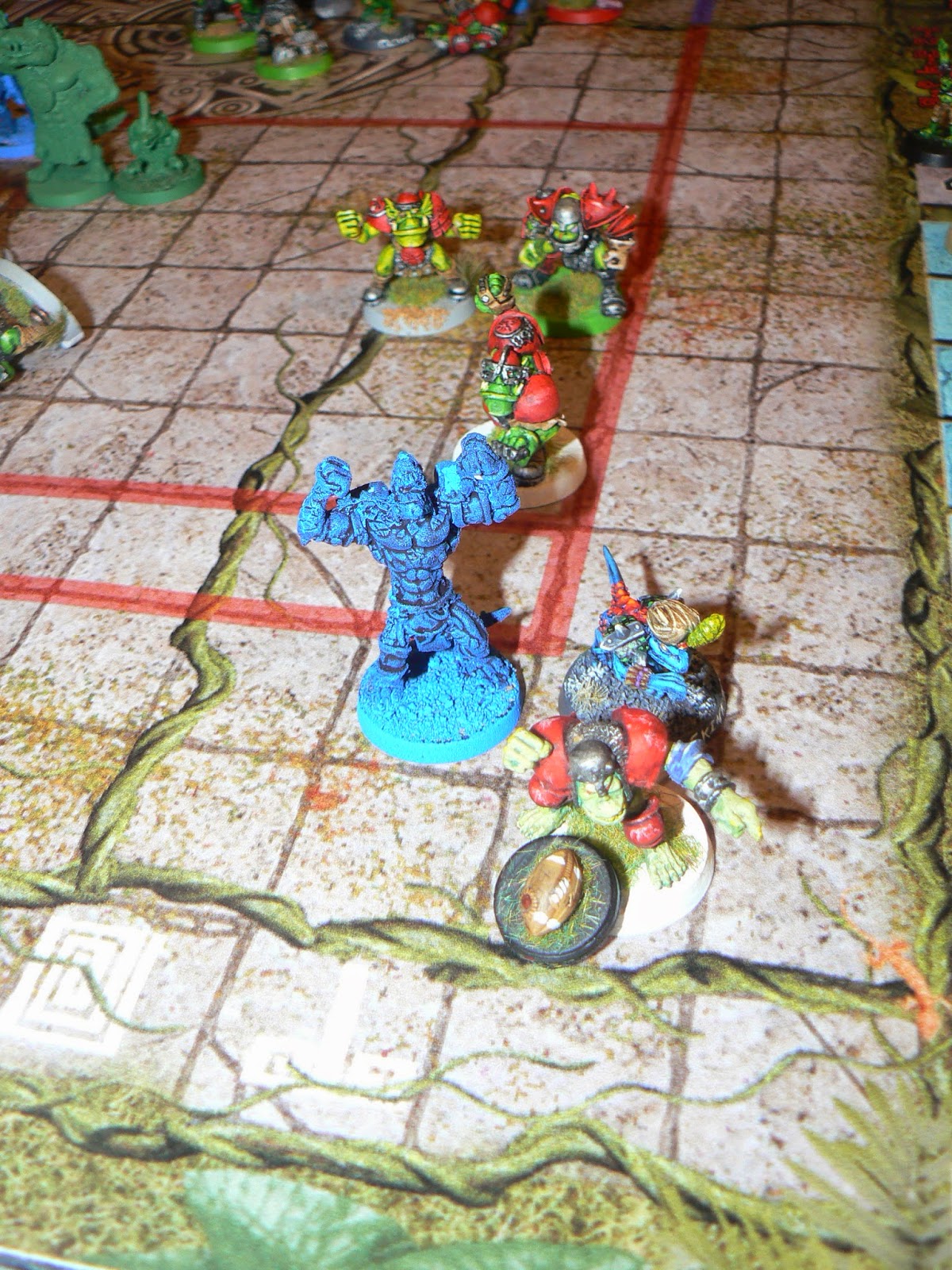 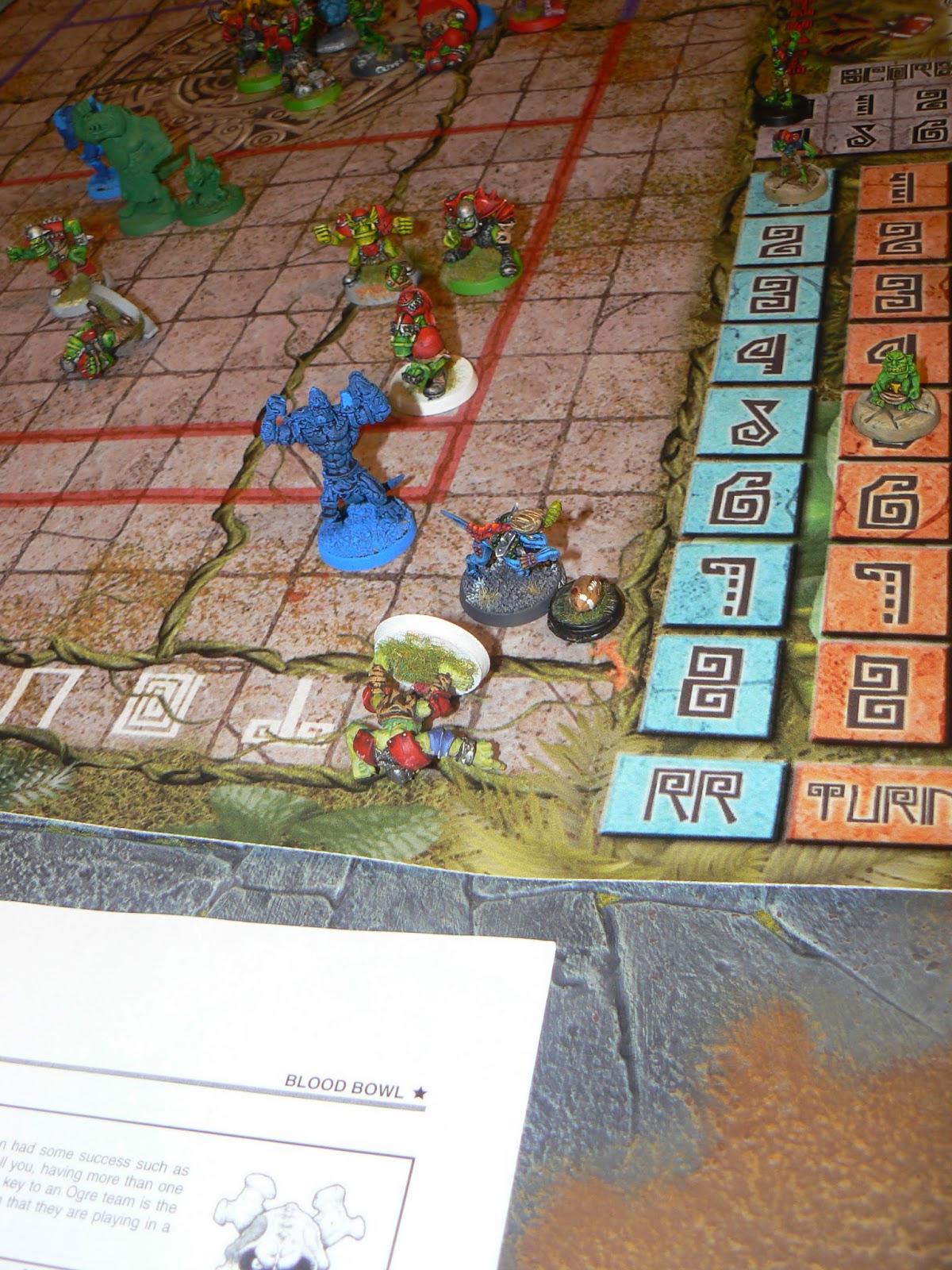 I'm not having this again and pull down the Skink and finally get to injure someone. About bloody time!

I pull back and regroup around my Thrower. The plan is to make a charge down the right side of the field and see if I can get one back. 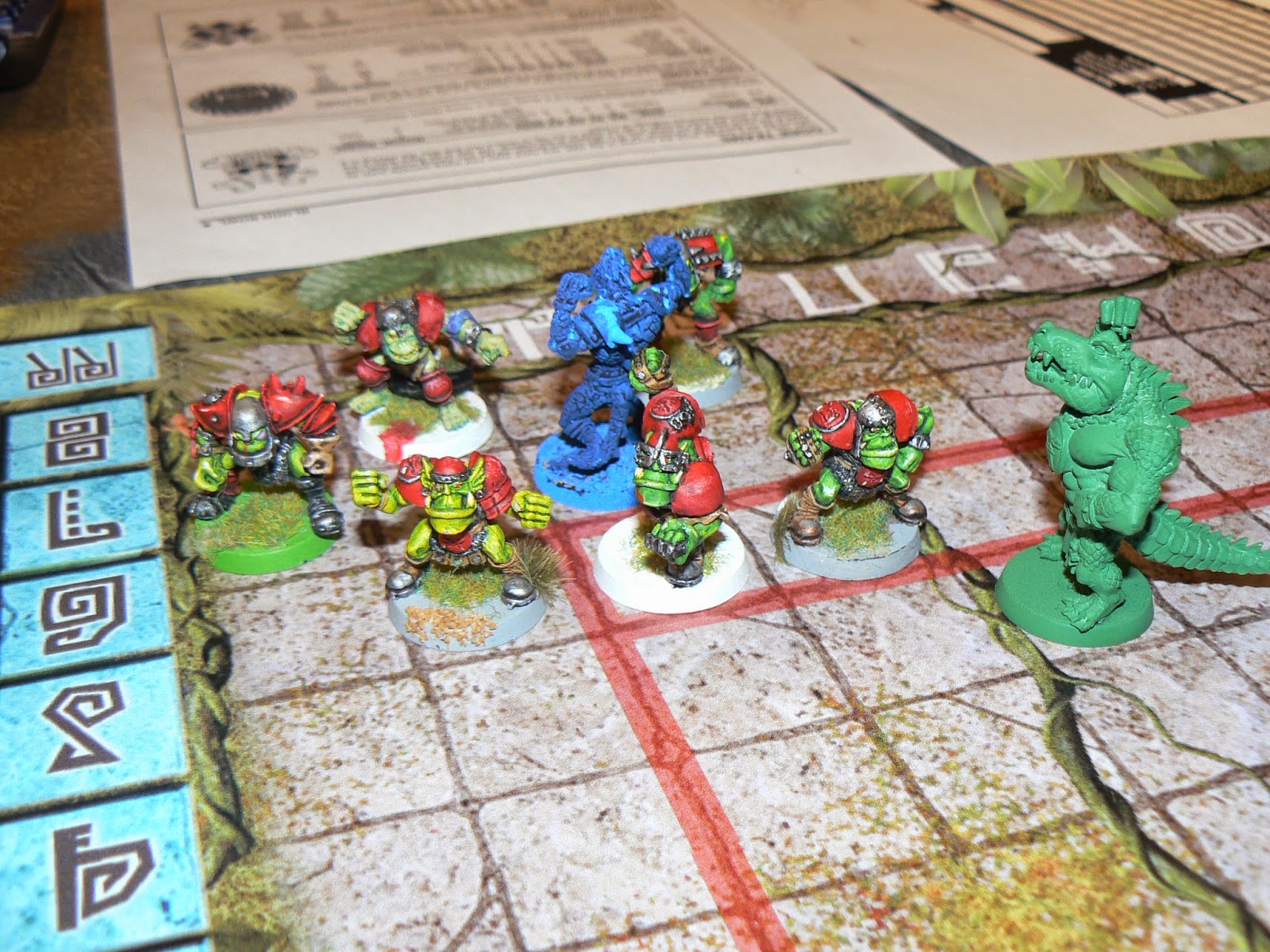 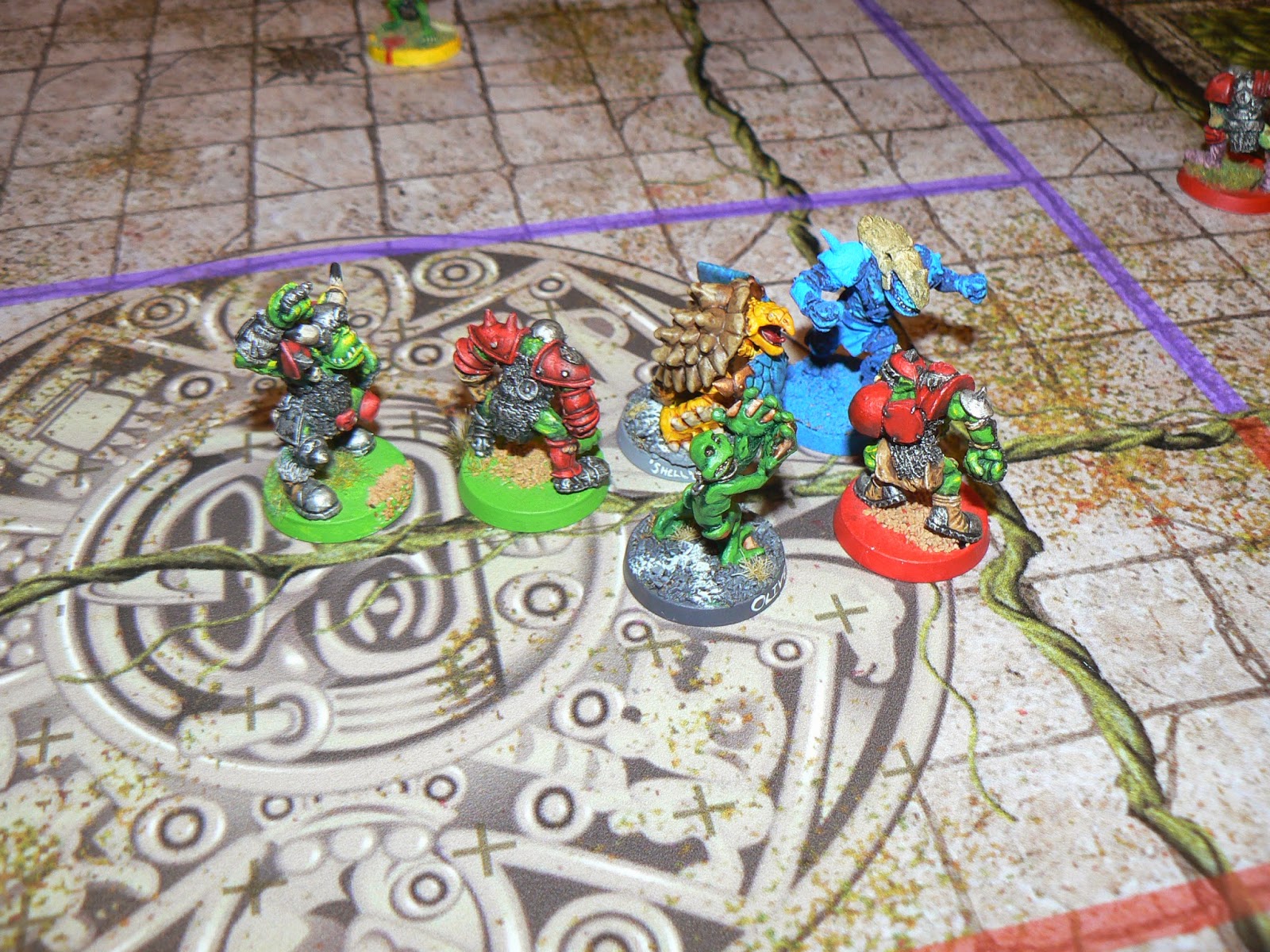 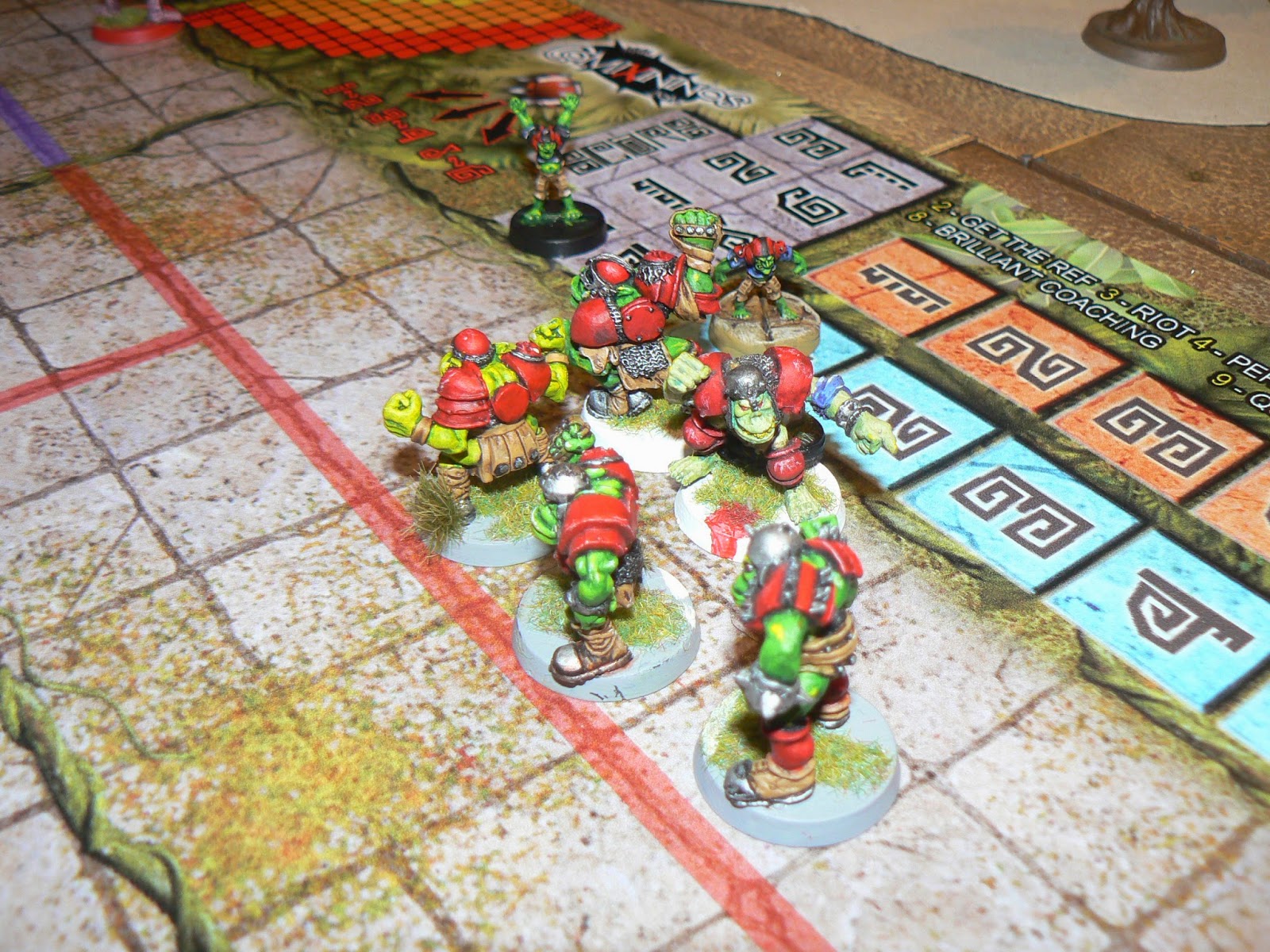 Lano jams out my catchers and pushes my blitzer into the crowd which now results in going straight to an injury roll. 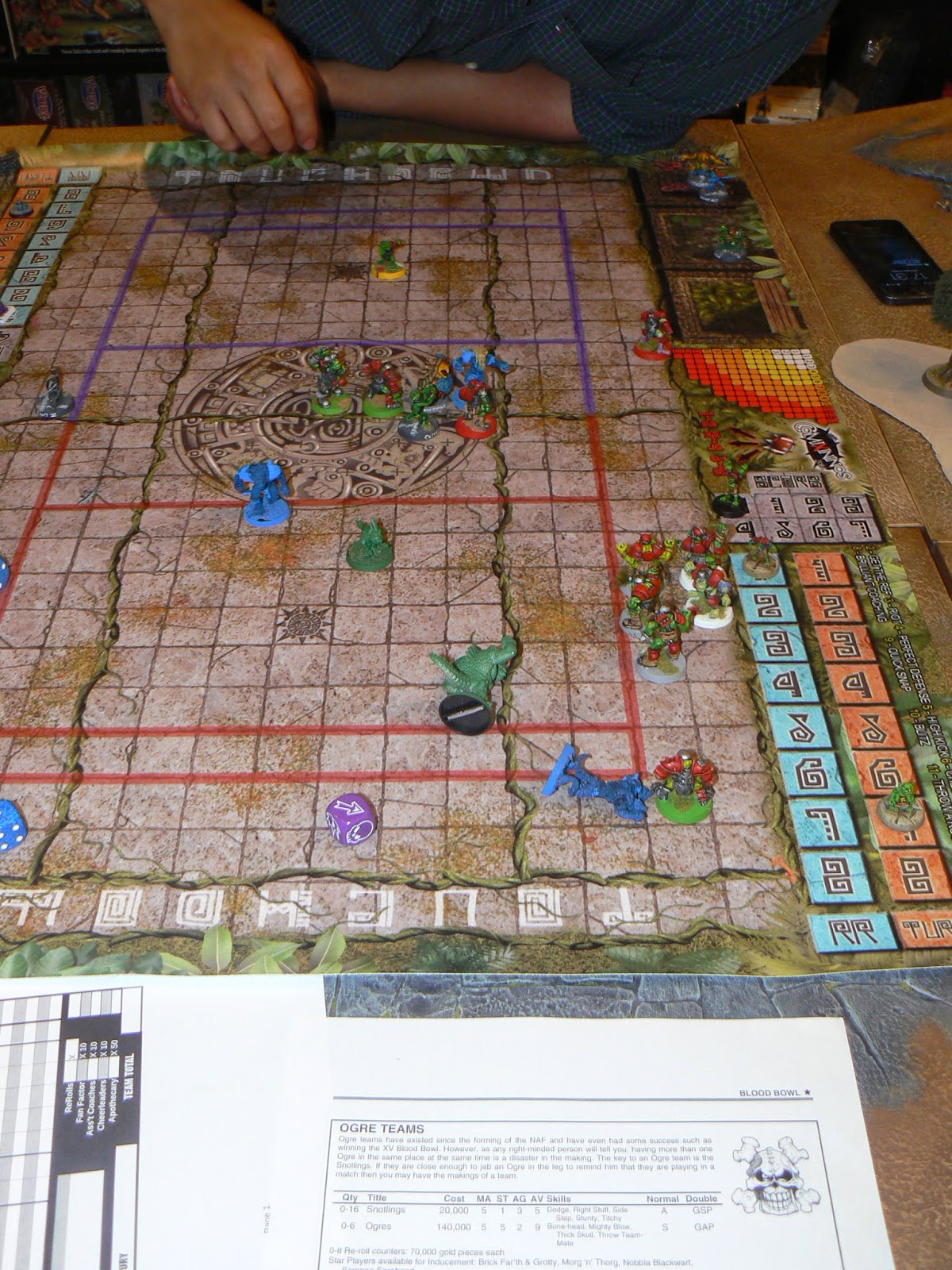 And thats the half. I have to bail out early to get home to pick the kids up and to be honest I'm glad as I'm not sure I could muster the enthusiasm for another half.

I never thought I would get bored during a game of Bloodbowl..... Jervis what have you done?

We have the Spike cup kicking off this Friday and its a knock out so I will give it a go and see how the league works out from there.
Posted by riot ville at 13:36