Top night at the 'Essex Legion'!

Despite the two losses! 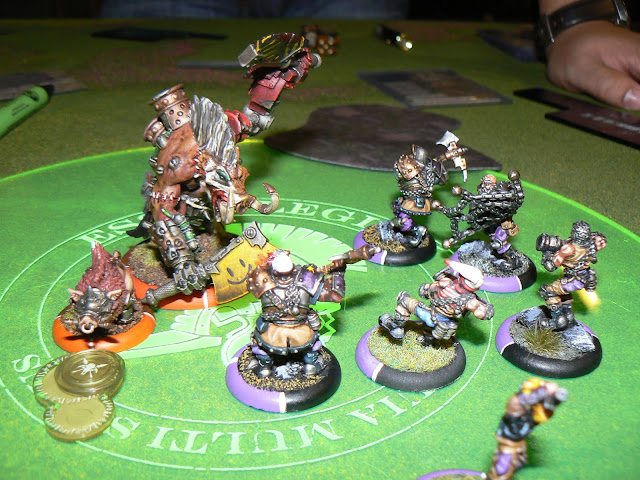 With the School Holidays begun and me absolutely hanging by the end, I was allowed to skip the Kids Swimming and Bed time and get down the Legion for the full 5 hours!

I knew it was going to be a big night when I turned up bang on 5pm and the Car park was already chock a block.

First up I had a 35 point of Warmachine with Lano as a homage to the blinder we played last year.


First Lano sets up his 35 points of Piggy goodness. 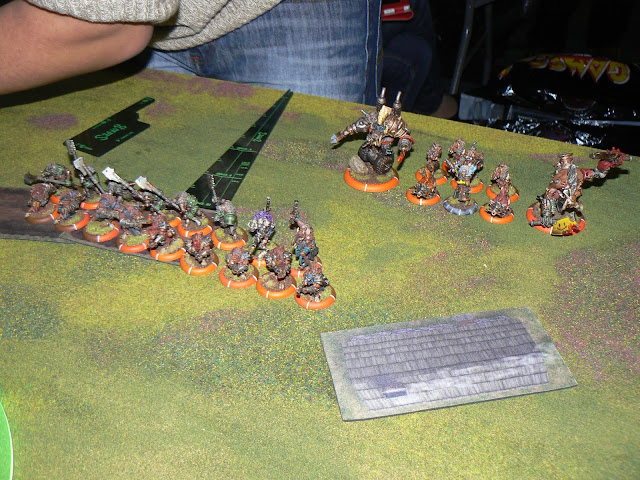 I go with Magnus and a force of 3 Jacks and a full unit of Gunners as well as other bits. 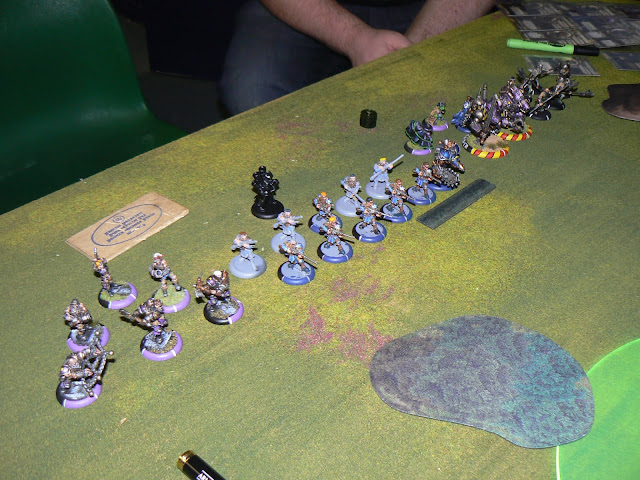 No surprise round one. Everyone legs it into the middle. I fluff my spell casting. 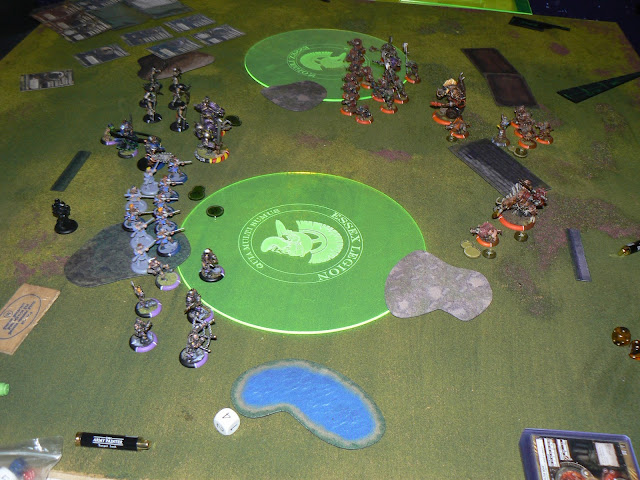 I take one 'Control zone' Lano takes the other. 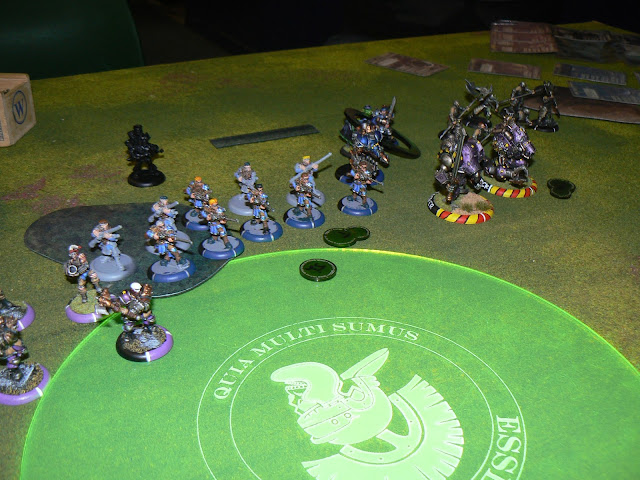 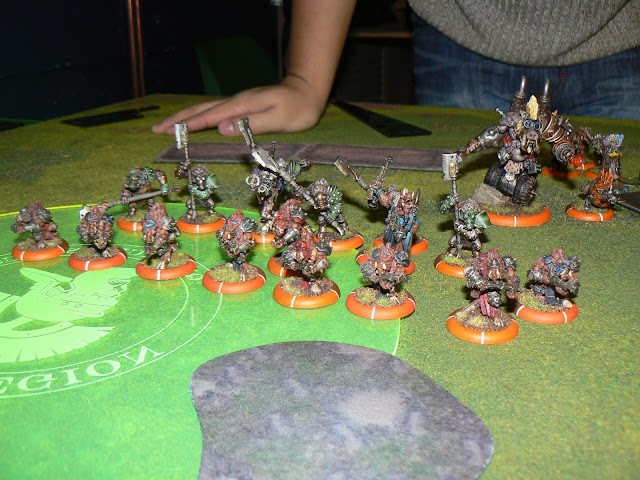 And now the shernanigans begin. First Lano offers up one of his Piggies. . . . 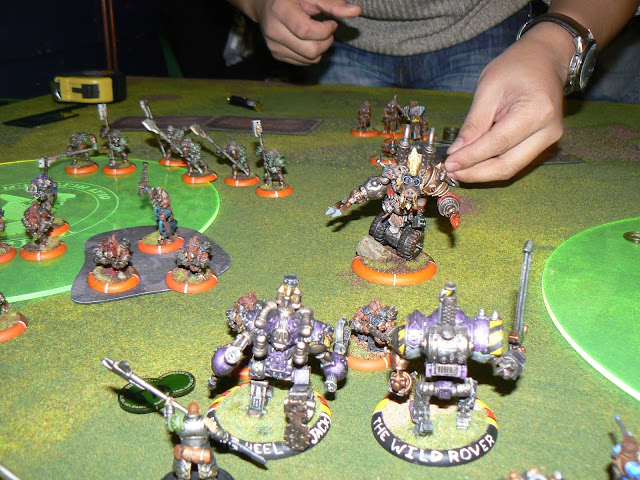 and then flames it to get in on Magnus! 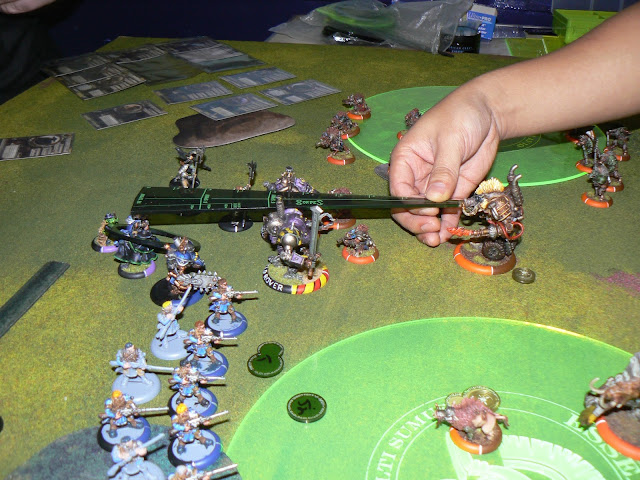 As is the nature of this game, milimeters count and one of his Piggies is just out! 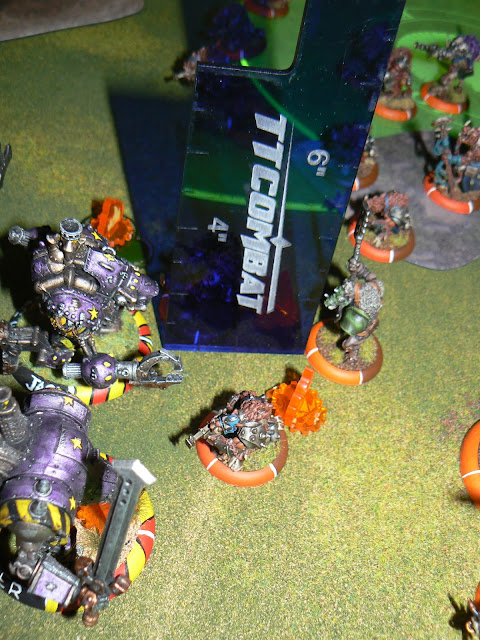 On my right, my Long Gunners blast away with a power 20 CRA and blow lumps off the Warbeast before the Devil Dogs charge in to finish it off.

In the centre my Freebooter sends the other Warbeast for a flying lesson! 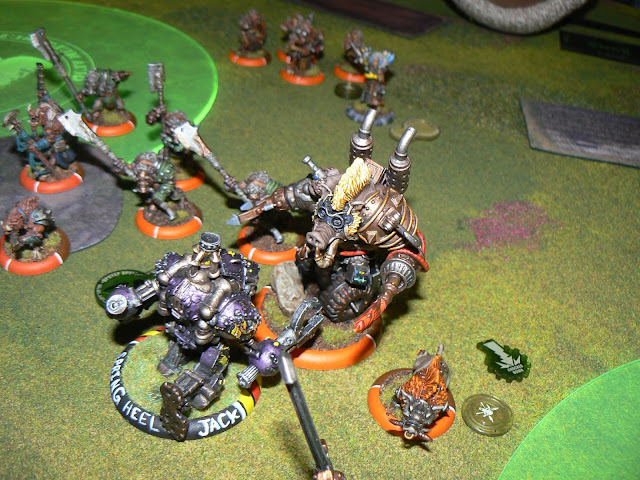 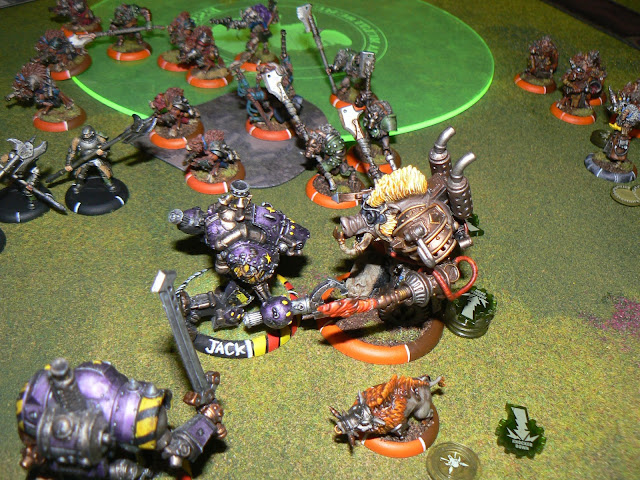 I then pop my 'feat' but fluff this and run Magnus and his Jacks in the wrong direction. This means Lano will dominate the control zone. 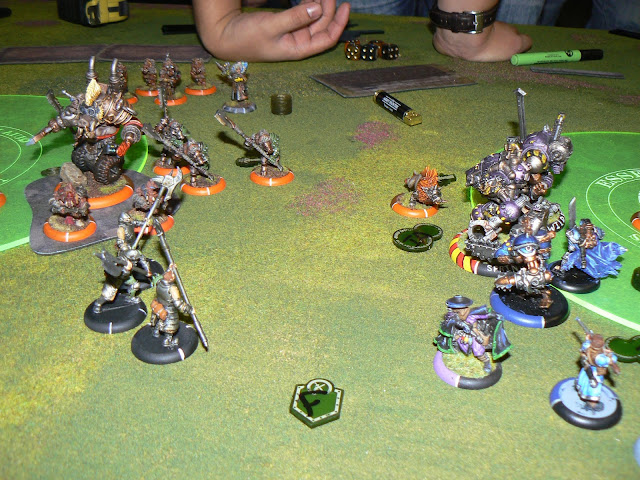 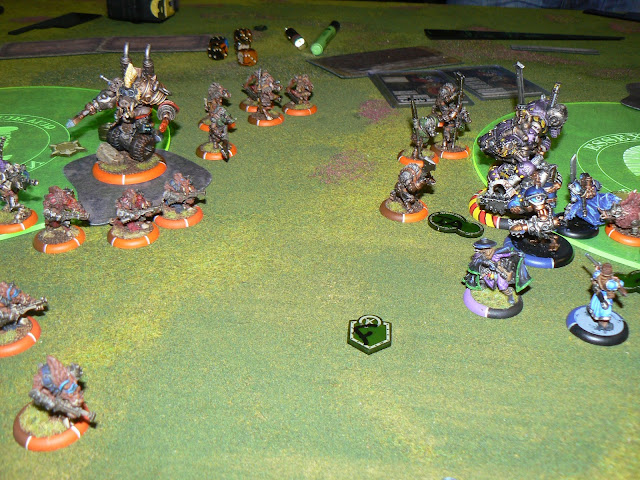 I need to get something into the opposite zone or Lano will score the points needed to win the game.

I try to trample in my Nomad. 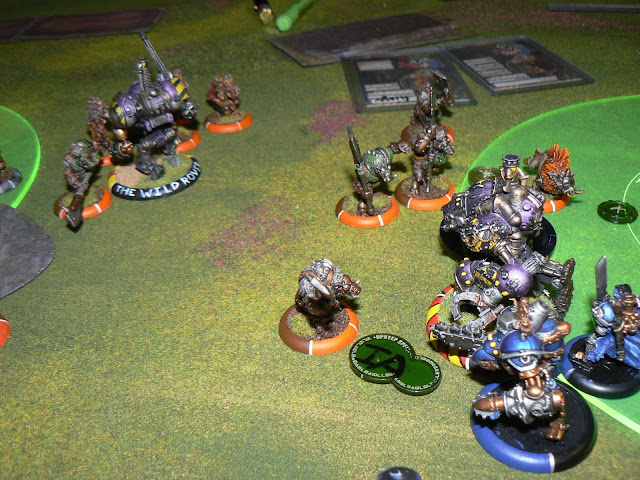 My plan was to then charge my Freebooter into the back of the Nomad and then lob it into the opposing control zone.

Unfortunately I had lost it's movement and I was unable to charge it in.

This cost me the game!

Truth is it was a long shot at best and legging Magnus in the wrong direction really cost me the game! 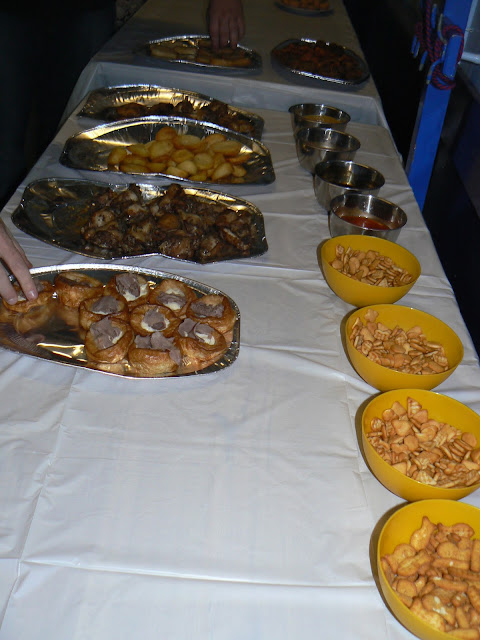 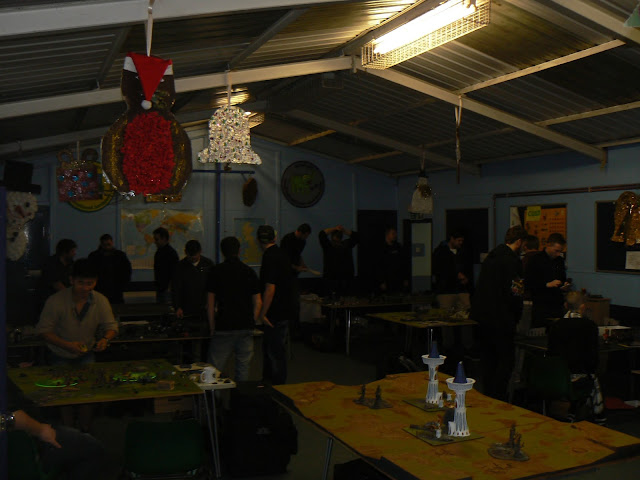 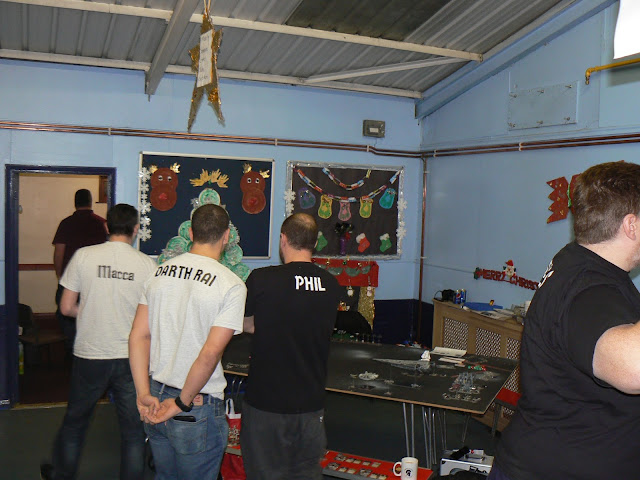 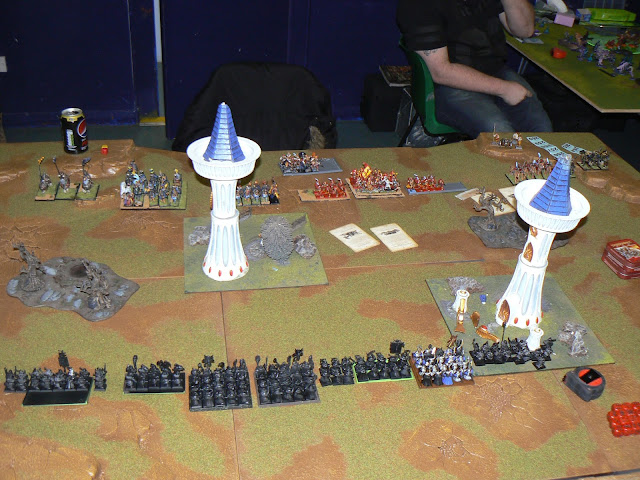 This is the first time I have ever seen my entire painted army set out! Almost brought a tear to my eye. . . . . almost! 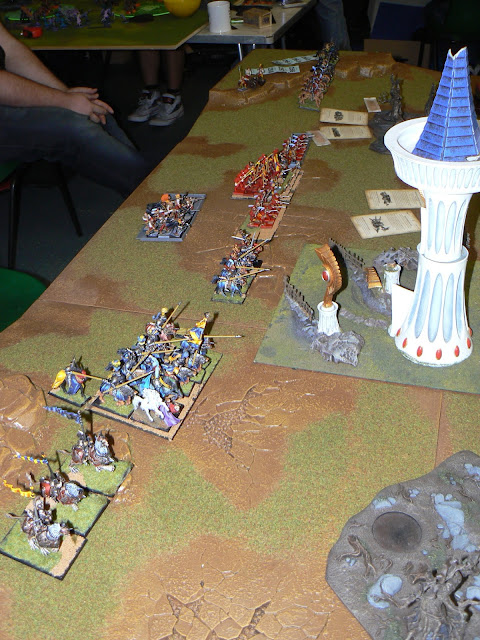 First turn and despite needing a six to hit and a five to wound, my Sniper plugs a wound off the Dwarf King! 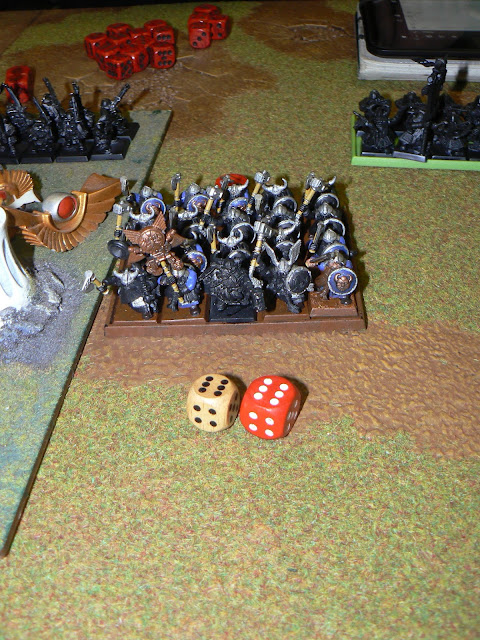 Both armies surge forward. I need to get stuck in sooner rather then later as his shooty units are nails! 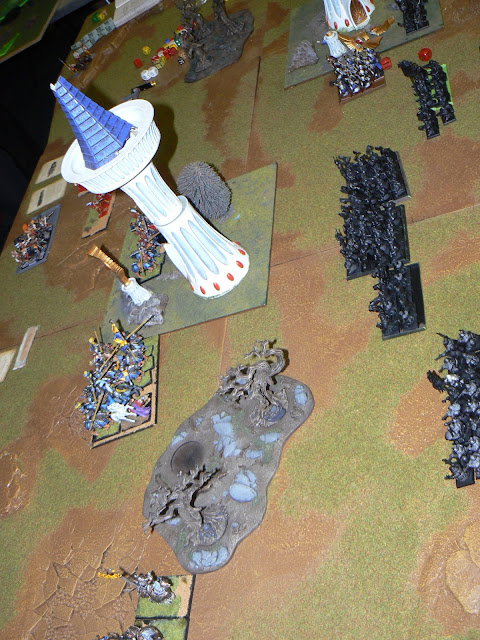 My Gryphs charge in but completely fluff their lines and only 1 Dwarf falls. 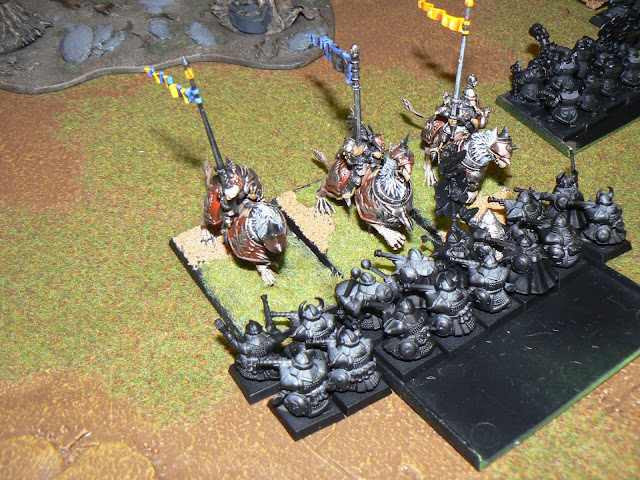 Then my General charges in but manages to miss with ALL four attacks! As is the norm the Horses kill more enemy then the Knights! 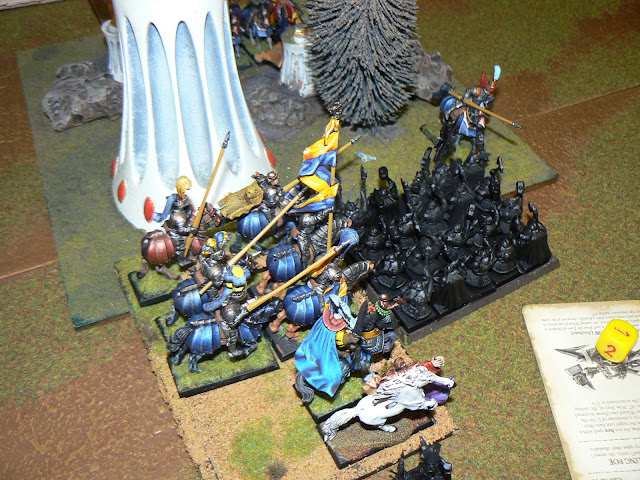 Failing to break the unit despite the two pronged attack, my General is open to a massive counter attack! 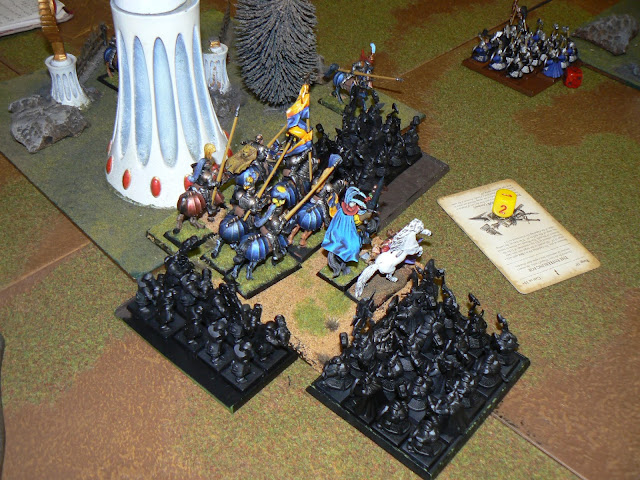 Thankfully my Gryphs finish off their opponents and run down the Stunties as they break. 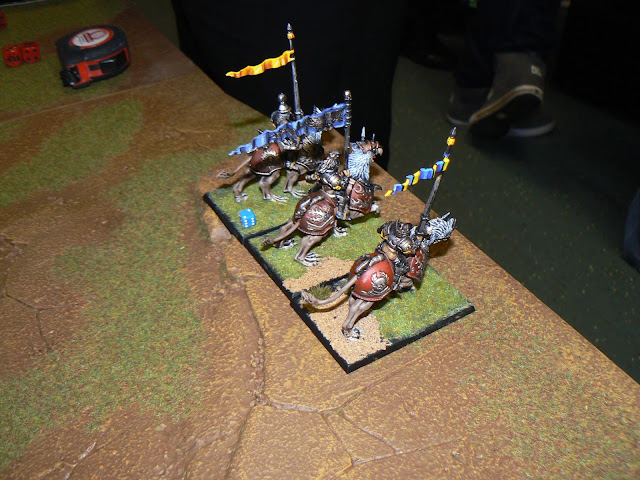 With it all going wrong in the centre I have one last chance to pull it out of the bag. If I can hit the Dwarf General with the 'Pit of Shades' most of the unit will be decimated and I might even bag the General!

In desperation I charge in my Pistolliers. My Outriders have already been blasted off the field. 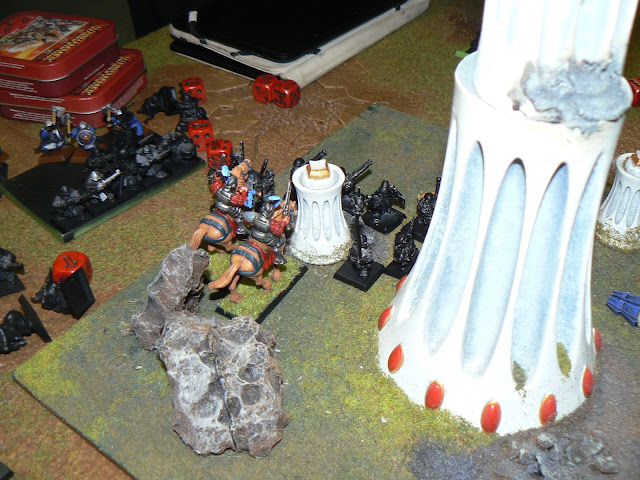 With my General running for his life, the rest of my units engaged in grinding combats they cannot win and the enemy General bearing down on my Spears I declare! 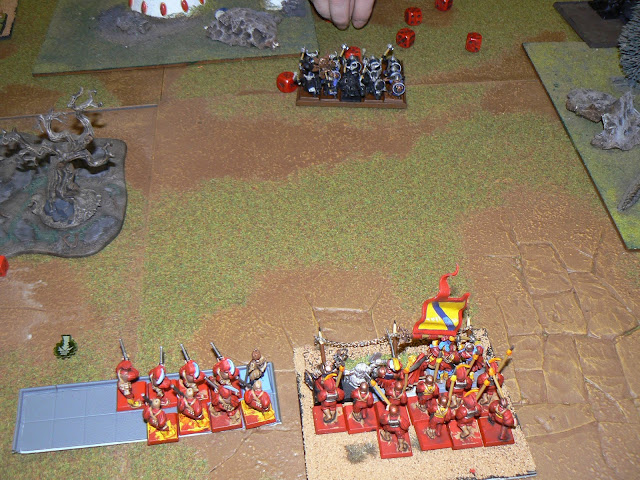 Want to thank all the fellas at the Legion for a top night!!
Posted by riot ville at 01:50