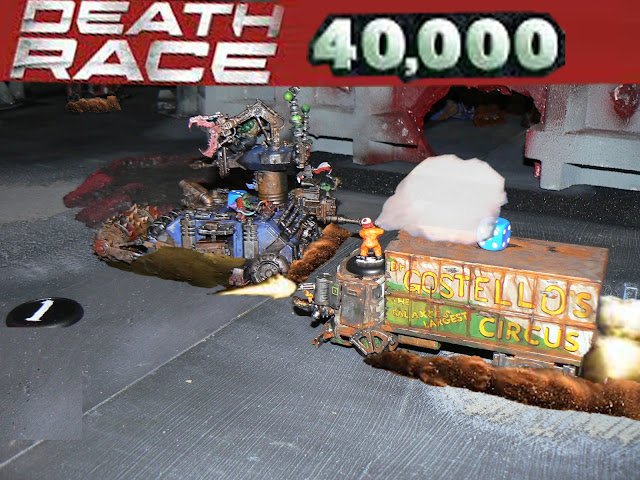 Once again with the kids in bed I race to the car and start my own version of the race by trying to get the the Legion without getting flashed by speed cameras.

I am tempted to field Keels on Wheelz but decide to give Dr. Gostellos jalopy a run out instead.

Gentlemen (and Lady), start your engines!

I'm into the first corner and decide to meet the neighbours as soon as possible and try to put some new dents into the great looking Trukk in front of me. 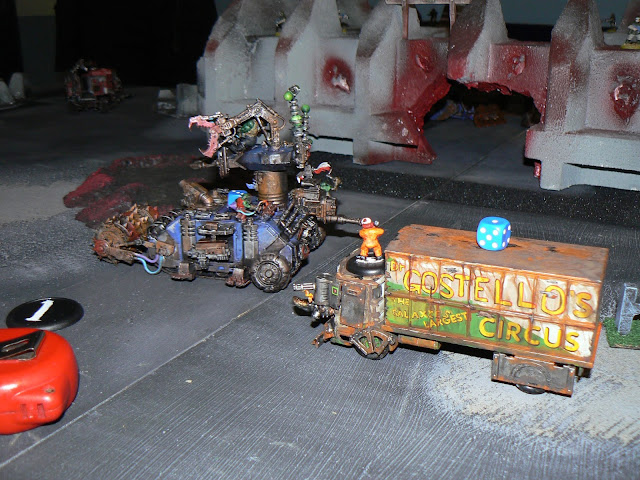 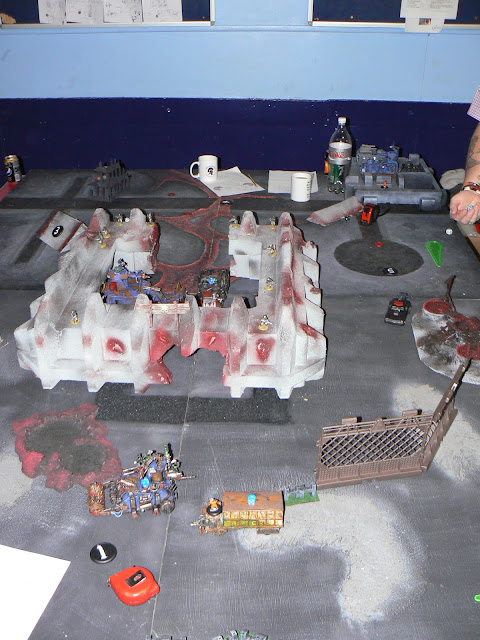 Yep there are people in the pits already. It must be Death race! 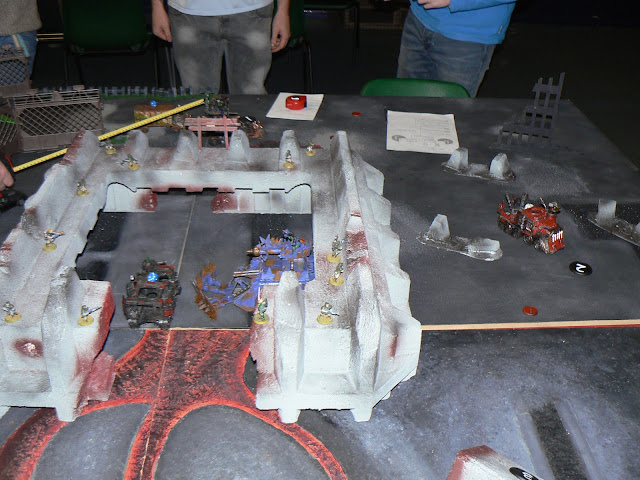 The 'Black Death' comes careering round the corner and T-bones my Jalopy. 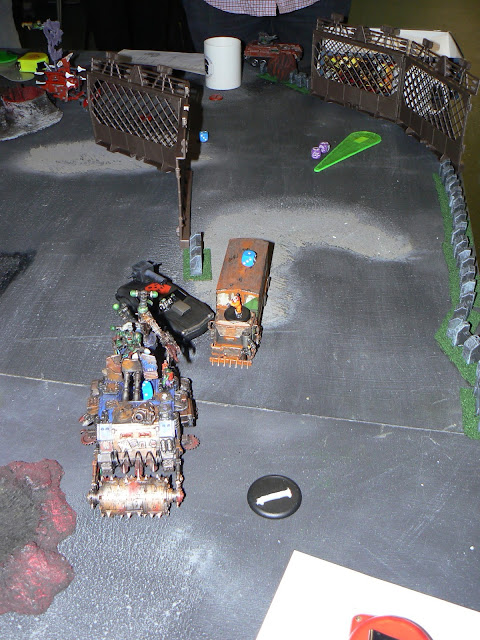 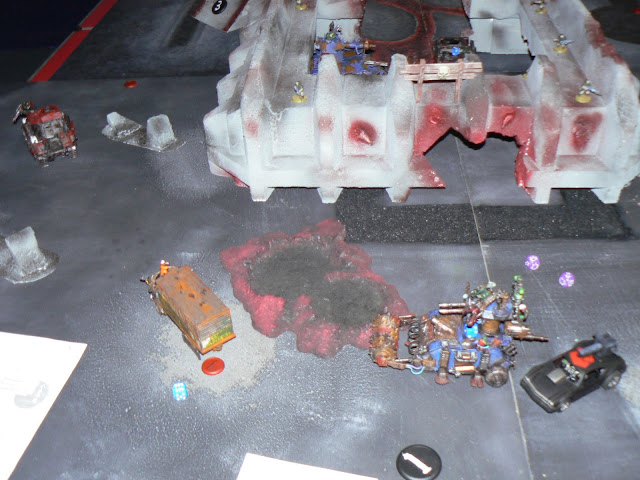 It would be rude not to say hello . . . . with high caliber weaponry! 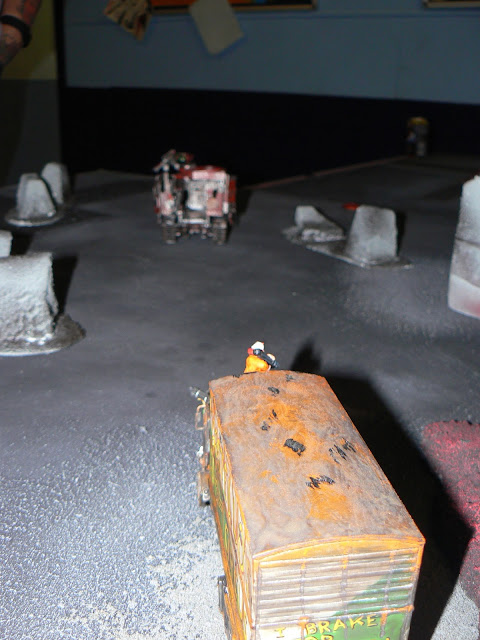 The track gets a bit stacked behind me as the other drivers take great pains to kick lumps out of each other!

My experience from BOYL 15 teaches me 'In order to finish first - First you have to finish!'

I decide to race ahead and leave the young un's to it. 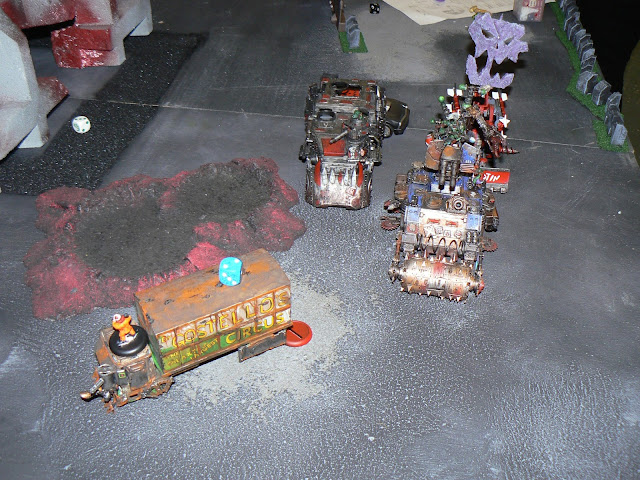 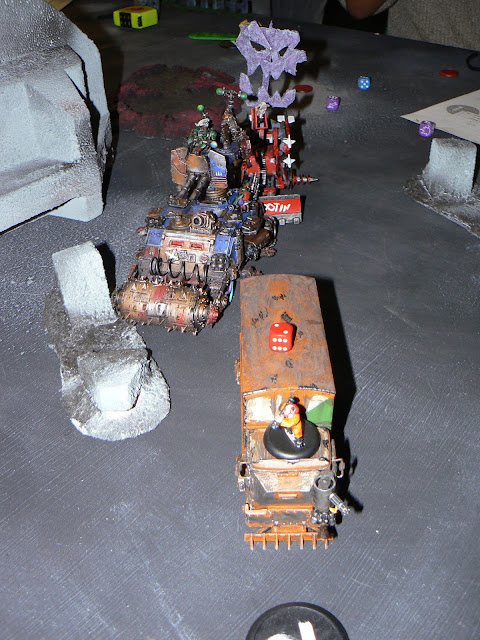 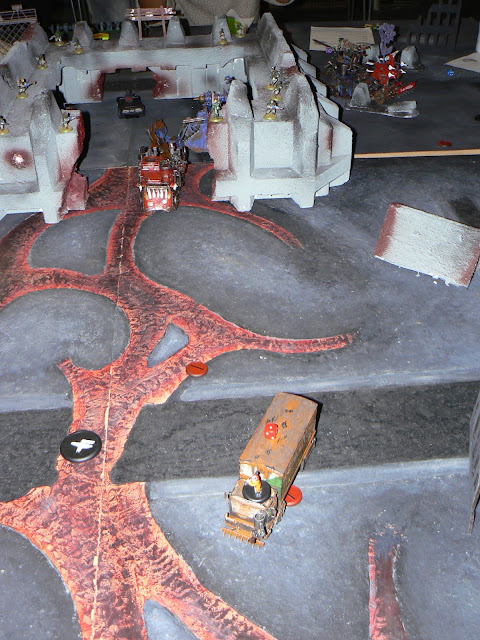 Except the 'Red roller' coming storming out of the pits and blind siding me! 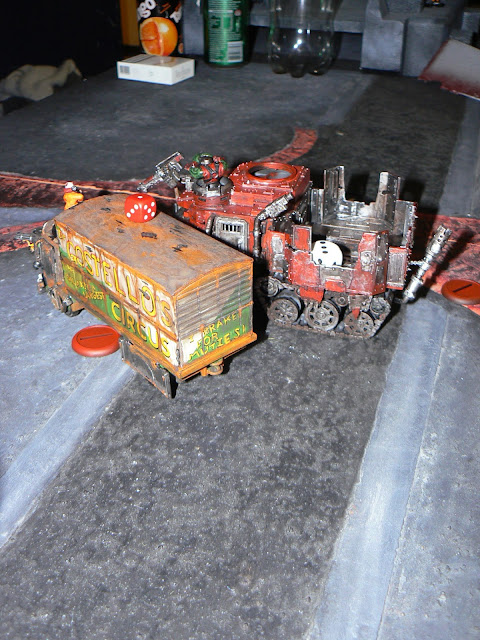 I decide to use the momentum from the shunt and double back on the trailing pack as I am VERY aware of the amount of heavy artillery pointing at my rear!

I target the bloke with the big missles and 'Ram, gun, shunt' in a nice combined attack to put him out of commission. 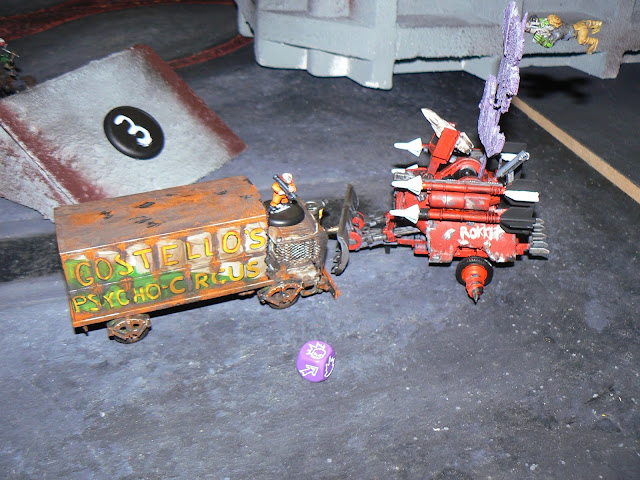 Truly this one had been blessed by both Gork and Mork! 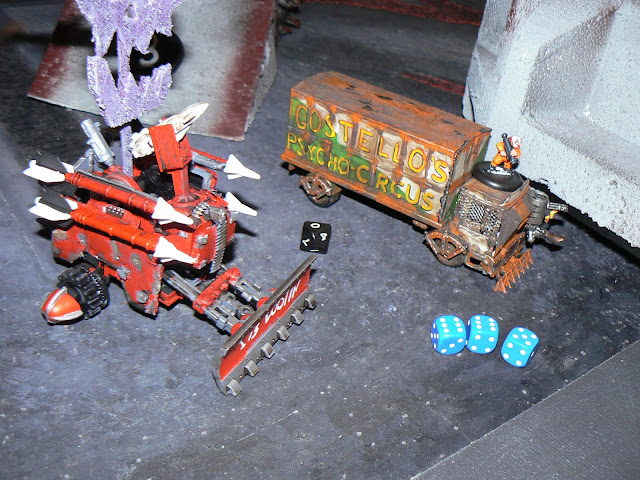 Not surprisingly this winds everybody up and soon everyone is testing his new ability to make EVERY SINGLE SAVING THROW!!!!!!!!!! 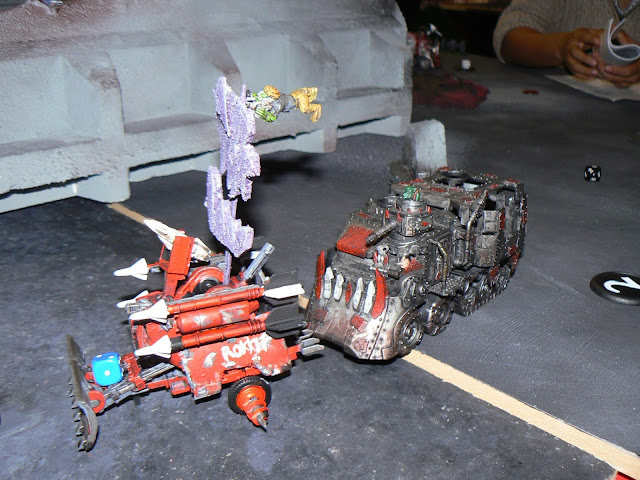 The 'Black Deth' gets rammed and I get to decide where it ends up. I don't know if it's the white line fever getting to me or the Squig fuel fumes but I go a bit nuts and decide to place it, so it can land on me if it gets rammed again. . . . . At least the photo will look good. 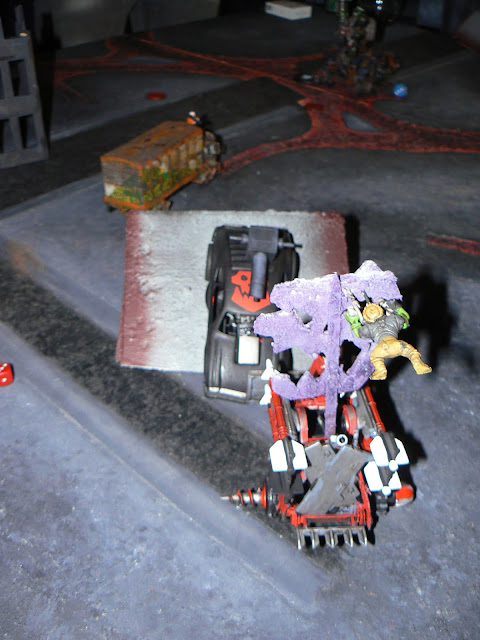 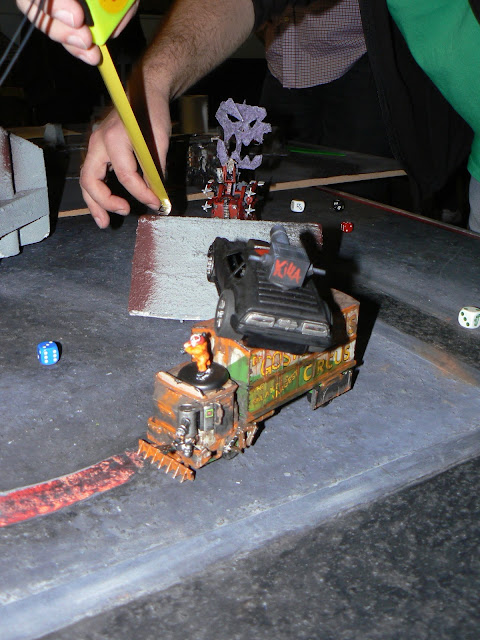 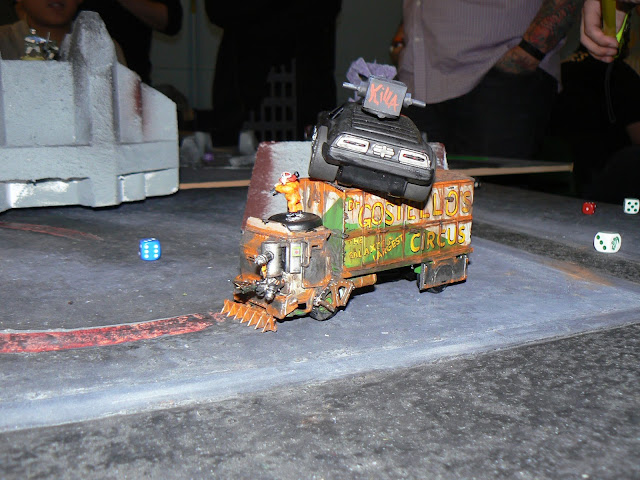 With time running out, no quarter is asked or given. 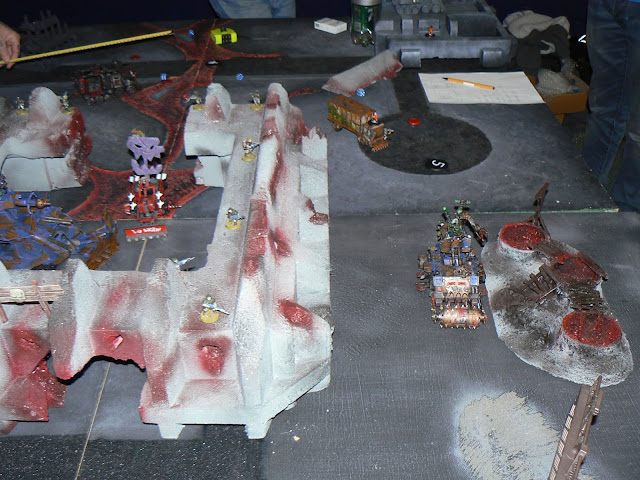 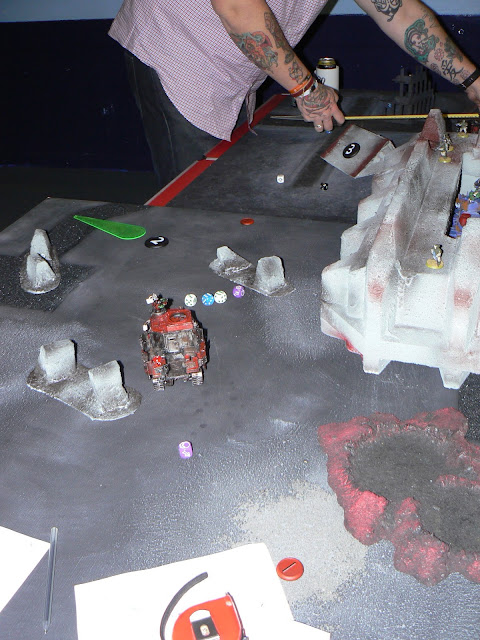 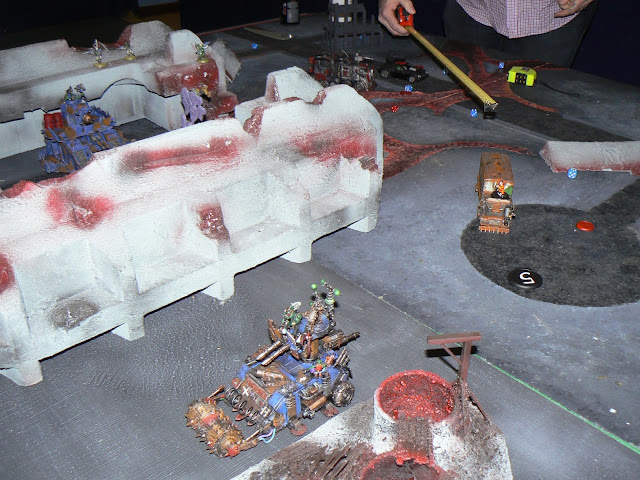 I slam my Jalopy into reverse, ram the vehicle behind me and then pull off a hand brake turn to strafe the survivors with machine gun fire!

Then my driver looks up to see the 'Red rage' come flying off the edge of the ramp in slow motion. . . . . 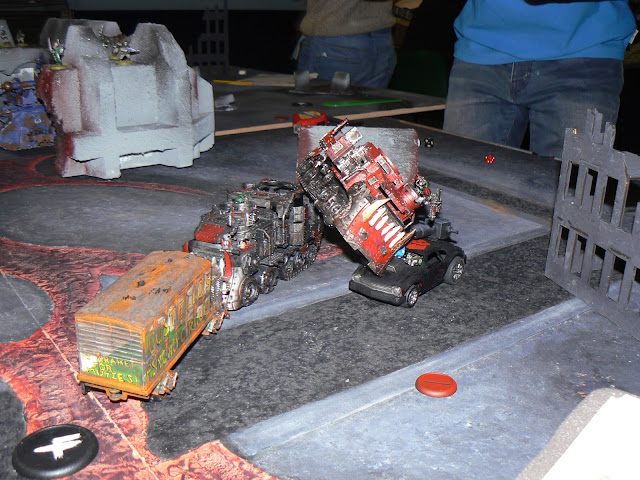 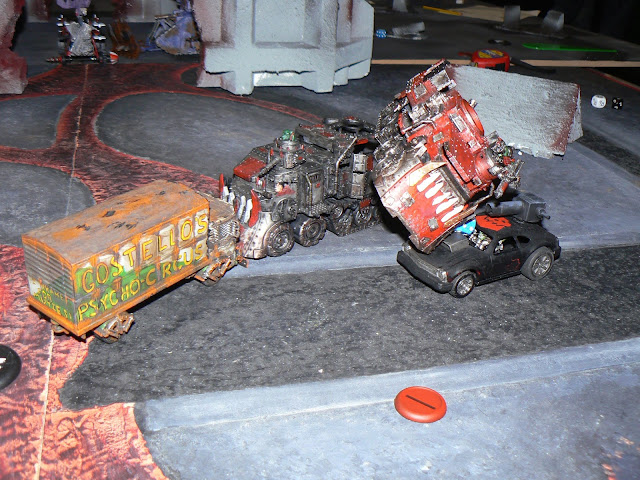 as my Jalopy bursts into flames!!!!! 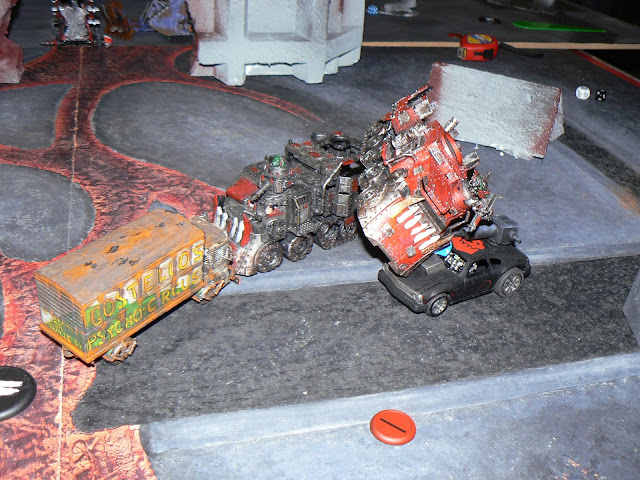 What a great cinematic ending to the race and a fitting way to end the CARnage!!!! 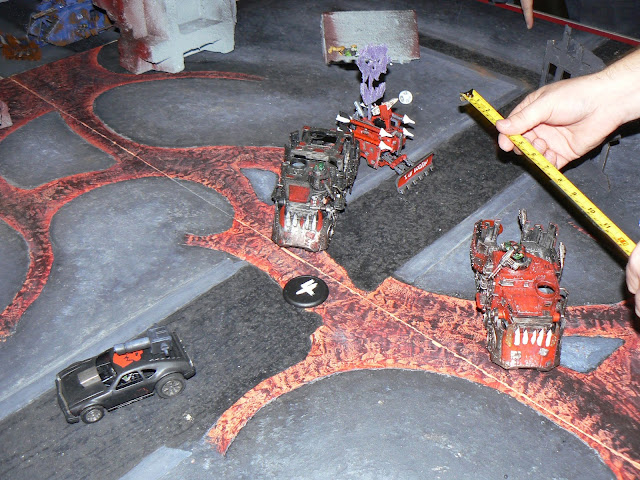 Thanks to Lano for hosting the race and trying to keep everyone moving and quickly GMing the game and all the inventive shernanigans going on!

And thanks again to Captain Crook for coming up with such a cool rule set. I hope we did you proud!