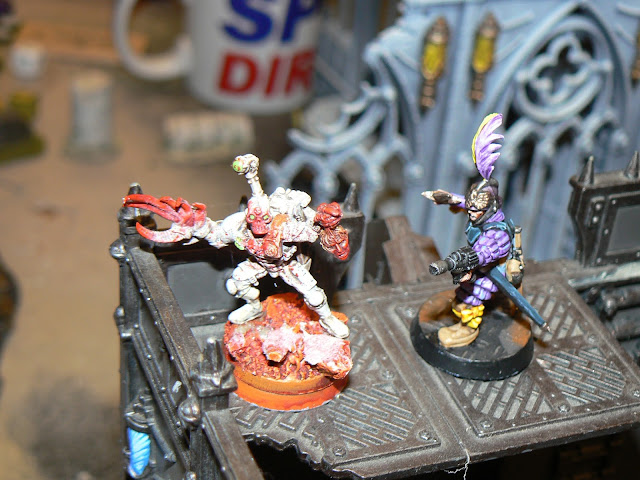 Once again on Saturday night I had entered the 'shed of lead' at Neils to find the following table set up . . . . 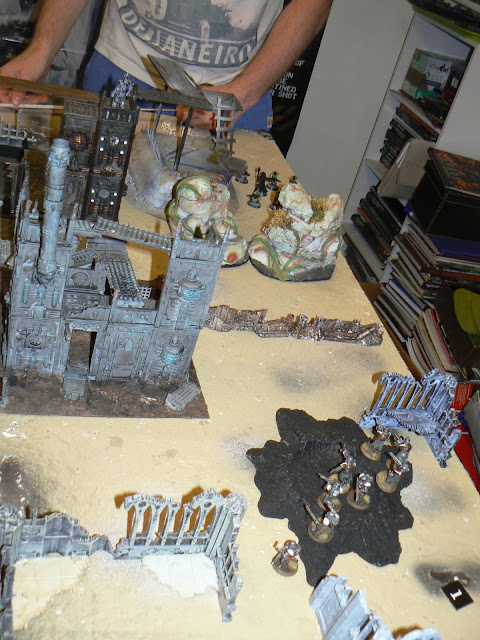 Two new protagonists in the form of Steve and Ray had also heard rumours of the riches to be found in the depths of the underhive and had assembled warbands to seek their fame and fortunes!

Further research at the archotech site had lead to the discovery of an abandoned city complex within a side tunnel. Word had spread like wildfire through the shady bars and dives of the underhive and amoung the perfumed halls of the Hive elite!

Once again the young Fop had heard of the existance of some strange looking eggs and decided to explore the site with the help of his security team and mutant guides in the hope of finding something interesting to shoot! 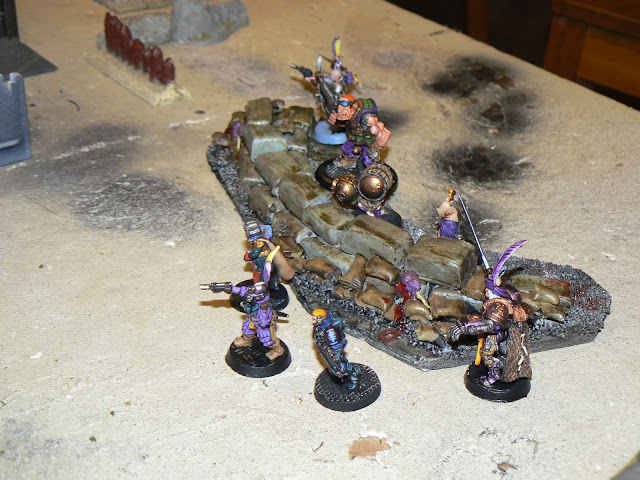 The Dark Rangers were once again sent into the tunnel complex under the command of a new officer (Rob) after the miserable failure of their last commander!

This time they were under the express orders to ignore the claims of anyone claiming to be of the Inquisition no matter what evidence they presented to support their claim. 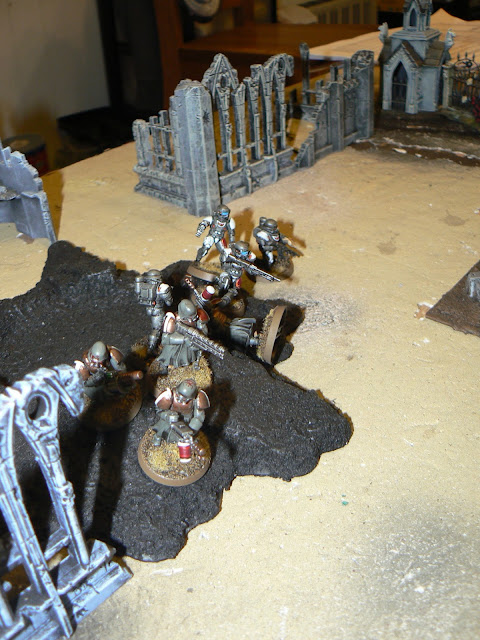 Once again the eerie looking miners were reported in the area. This time they seemed much more organised and focused. As if they were seaching for something specific! 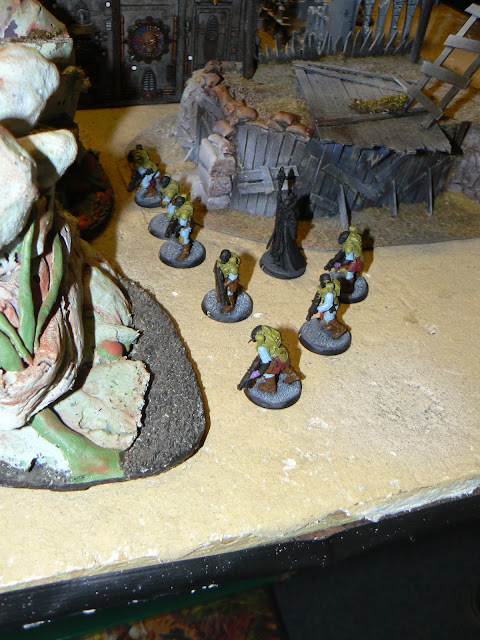 A forth warband had also appeared (lead by Steve) but as yet there was no intelligence forthcoming about their allegiances or motives!

The well armed mercenaries raced towards the posh looking hunting party, guns blazing!! The Fop's hunting party took up defensive positions and had to weather the barrage of incoming fire until the enemy come within range of their pistols. 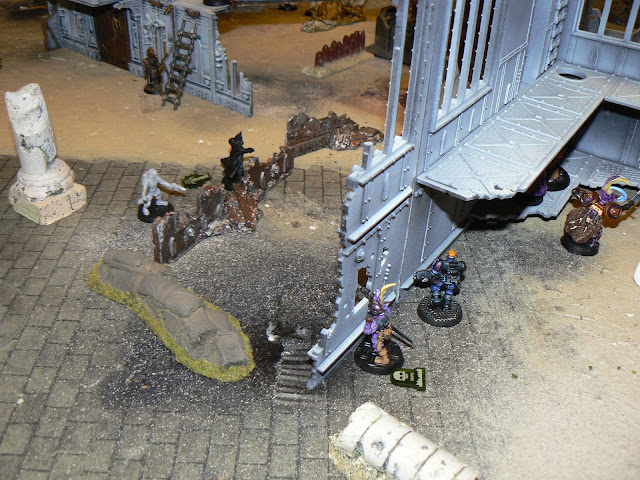 The silent miners raced through a cannoncade of laser blasts towards a 'nest' in the centre of the abandoned city. Whether their presence awoke the beast within the nest or they knew of its awakening the result was the same. A beast of massive proportions rose from the nest and seemed to share a preternatural bond with the surrounding miners! 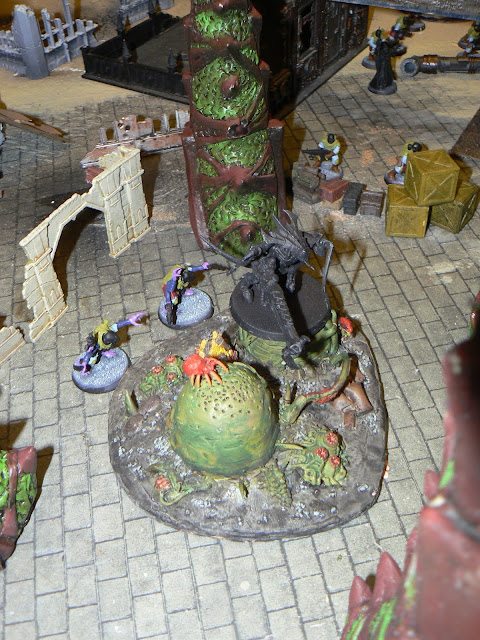 The Fop's head of security climbed onto the first floor and used the new firing position to pour fire into the new aggressors. He was swiftly joined by the well muscled form of a  black clad 'security expert' who added the considerable fire of his shotgun to the head of securitys deadly accurate fire. His weapon knowledge quickly dealing with a potential double weapons failure! 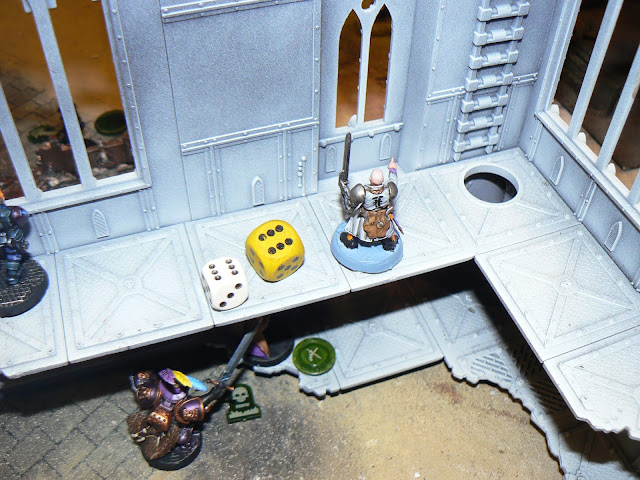 On the right the Dark Rangers had discovered and managed to activate a long lost weapon defense system. As the rust shook lose from the raising weapons platform and the distinctive sound of powering up heavy lazers filled the cavern, warriors from all sides could be seen fleeing for cover!!

Suddenly a wall of wyrdfire exploded into existance before the lazer turret blocking all lines of sight. The young Fop suddenly become intently aware and his carefree demeanour vanished as he exposed himself to gain a better veiw of this strange phenomenon!

In the shadows a strangly robed individual could be seen bathed in sweat under a strange aurora of sickly green lights. He seemed physically drained due to his intense need to concentrate? 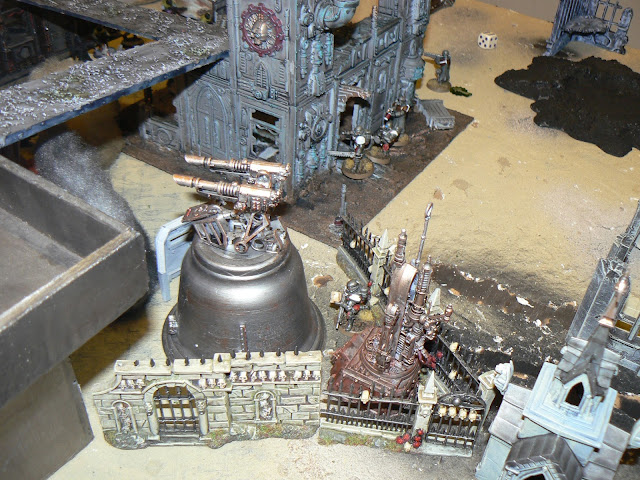 One of the Fops hunting party, seeking a better vantage point disturbed a status field. From out of the crackling corona of lights a bloodsoaked form lept. The terrified purple clad warrior finally opened his eyes to see the white clad terror leap over him and into the shadows. Relieved to be alive the trooper holstered his pistol and hoped he would be able to clean up the mess in his tights before he rejoined his comrades! 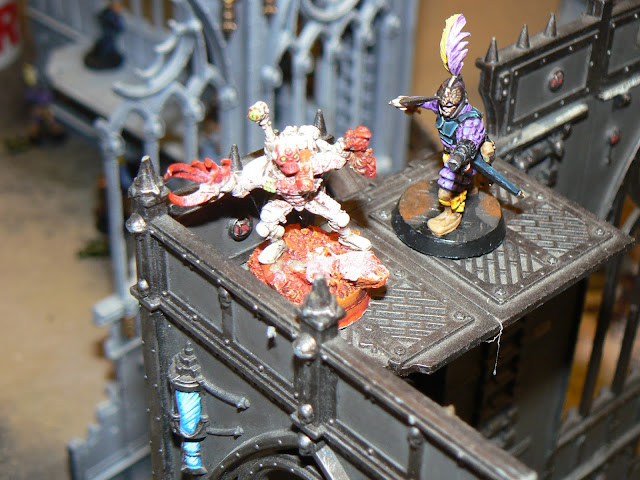 In the centre 'Grub' the Ogryn bodyguard charged out of cover and smashed the two protagonists sheltering behind the wall into bloody pulps. This was all too much for their comrades and the signal was given for the mercenaries to retreat off the board and regroup! 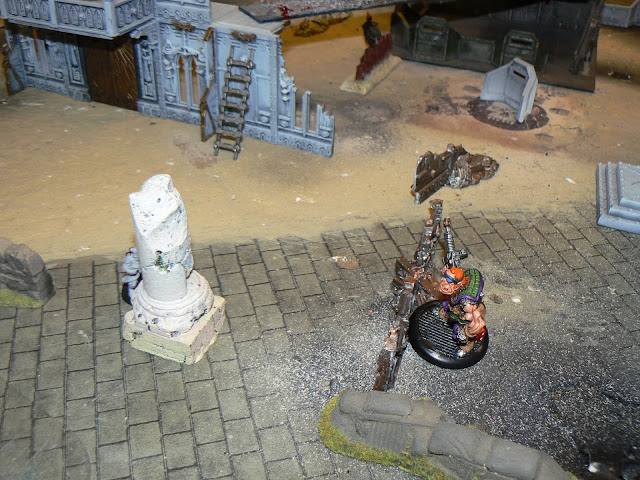 The recently released assassin continued to surge across the board towards the awakened beast. The terrors meet in a flurry of claw and blade but in the end the white clad assassin was left standing.

With his mission achieved the assassin dissapeared into the shadows. 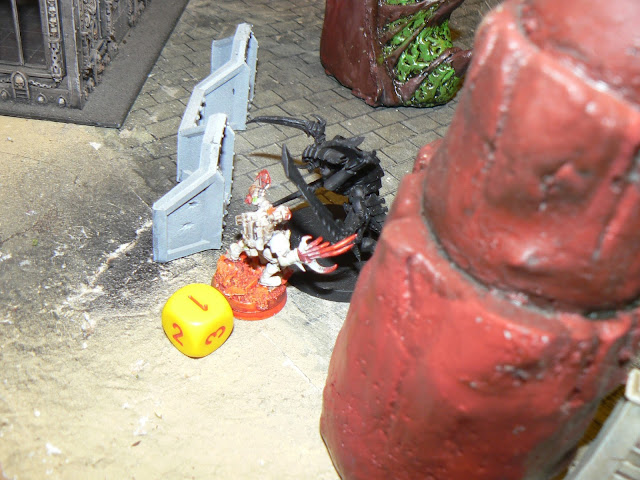 On the right of the table the miners and Dark Rangers continued to contest the central area of the nest, each warband desperatelly trying to bring their guns to bear in the encroaching darkness.

Suddenly the desperate sound of a Dark Ranger swearing profusly (that might of been Ray) as he tried to unjam his heavy bolter filled the Rangers with dread!! 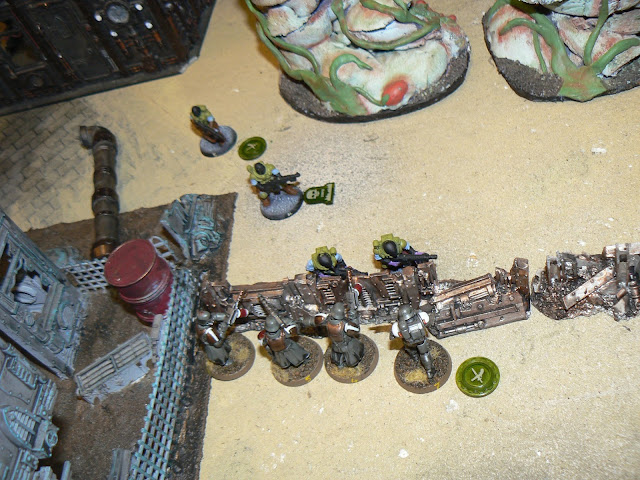 In a desperate bid to tip the balance the mutant guide sneaked towards the heavy weapons control system. It was only as he was about to pitch himself over the wall he realised he was not able to read the operating manual (thanks for that spanner in the works Neil!)! 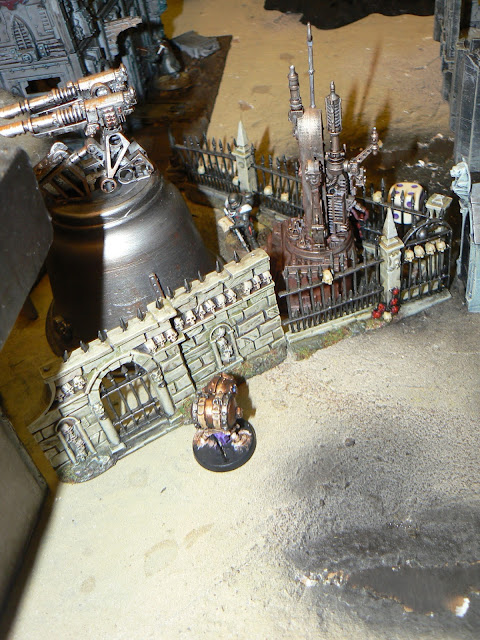 Now their ward had been killed by the assassin, two miners made a charge towards the weapons system operator to wrest it from his control. Could they survive the barrage of ordinance? 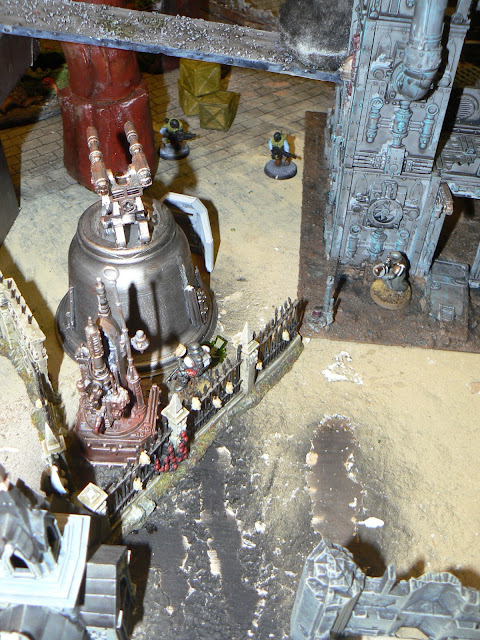 On the right the Miners and Rangers clashed in melee in order to tip the balance into their favour. In the background the purple attired hunters could be seen collecting their wounded and retiring to the shadows. Could the pulling down of the great beast mean the Fop had decided there was little reason to remain? 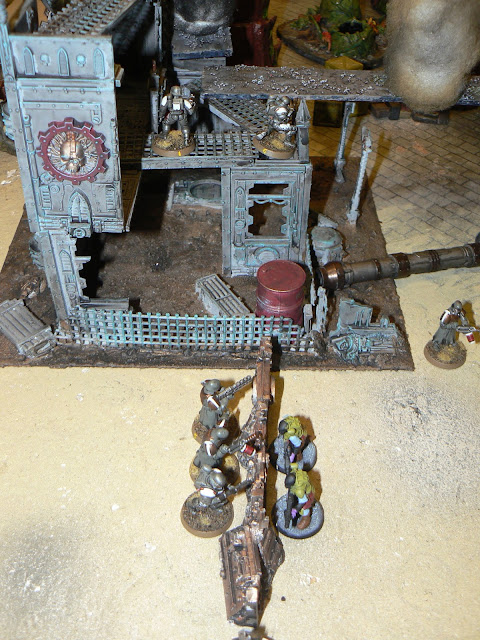 With cries of loyalty towards House Tardassian the Dark Rangers pulled themselves to their feet and with a superhuman effort cleared  the barracades of the eerie looking miners! One of the miners is cornered and clubbed unconscious by the Arbrites and dragged off towards the waiting cells! Could this spell destruction for his comrades? 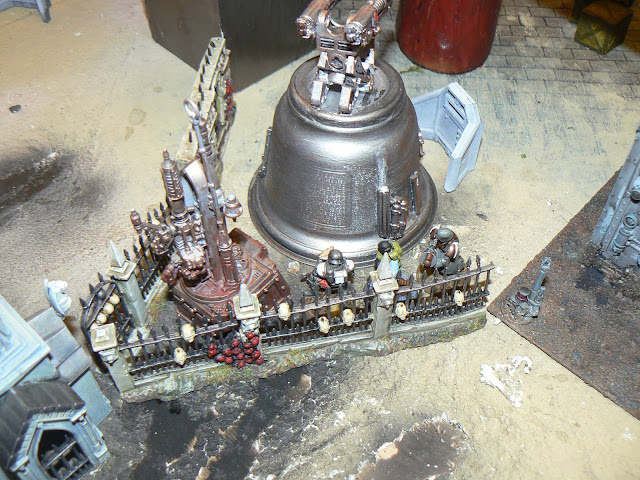 And that concludes the game with the Dark Rangers in control of the battlefield.

Will the presence of the rumoured inquisitor be confirmed?

What are the motives and allegiances of the new faction?

What will the deep interrogation of the miner reveal and can he be rescued or silenced before this occurs?

I have to thank Neil for hosting a cracking game despite all our ribbing and the games are becoming a lot more free flowing now we are getting to grips with the rules.